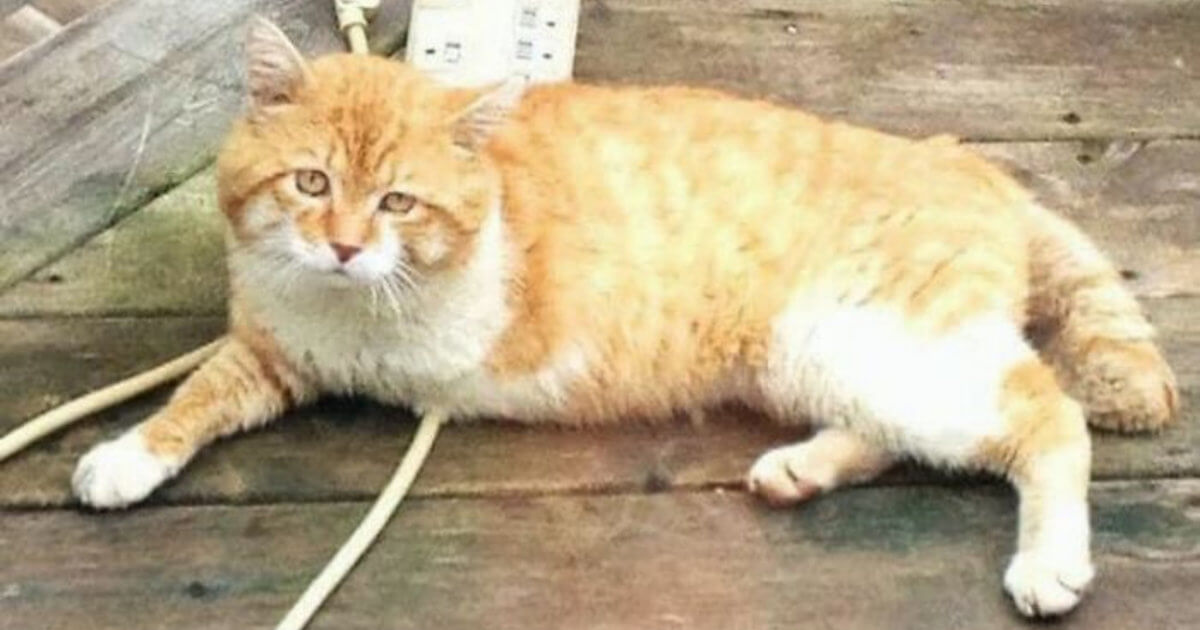 Is love visible or invisible? You name it. This story will make you burst into tears, not only the cat’s unlucky appearance but also his fateful years of finding his forever home.

Bubby is an orange stray cat who was wandering on the street until he met a nice guy Boyd Abbott 8 years ago. He was noticed with a missing arm and a part of his tail was gone, too. This 3-legged moggy started to jump into the man’s kitchen and claimed it was his.

From that day on, Bubby was likely to show up in the same place and began a friendship with Seson, who was the feline of the house. Bubby and Seson were a really close friends until Seson had to say goodbye to him and crossed the rainbow bridge.

Bubby won over the family’s heart, including Abbott. They invited Bubby to come in the house for a nicer place but he was in the preference of being outside. But that doesn’t mean the family didn’t provide food and water for the 3-legged cat. Bubby loved regularly visiting the man’s house, loved to be smothered with his affection. He was spoiled by the family, he got his own chair, a set of lovely dishes, Bubby had got the man’s covered!

Unfortunately, everything was in the worst when the man sadly passed away a few years later, Bubby and the family were heartbroken. The family was told to take a good care for Bubby when he was gone. After Boyd Abbott’s death, Bubby disappeared too, no matter how hard the family tried to find him. Even when they left food outside as usual, he didn’t have a return since then. Finally, there were no traces of Bubby, they began to worry about the worst.

Around the summer of 2019, the neighborhood recognized an orange cat with 3 legs Bubby was reappeared where he received the kindness of the late man. The tabby kitty came back to kitchen where he had the beautiful memories with his temporary owner. Ray Pinsent knew exactly that was the faithful cat of a decade ago that had been bonding with the dead man for a really long time. Being suffered from these cruel years, Bubby seemingly was weaker and older.

When the harsh Canadian winter arrived, Ray was worried that the cat might not be able to hang it up all the time since his health problem. Bubby was in need of a medical condition. The kind man Ray decided to fight for Bubby’s life to keep him safe from the weather by contacting with Abbott’s house (was replaced with the new family). He knocked on the door of the house of the new owner and asked about the cat. The new houseowner only came across to see Bubby once but they didn’t really notice. Ray pleaded the owner if ever the cat came back, just call him right away and he would bring Bubby.

Then, the very next day, she called back to tell him that the cat was sitting there in the kitchen. Ray rapidly went to meet him and rushed him to the Exploit Valley SPCA Adapter Bulls for helping him from the death as soon as possible.

“Bubby was dehydrated, beat up and all. He was sent to the vet and would not have survived another storm. The vet said he starting purring while on the exam table.”  Said the volunteer of Exploits Valley SPCA Adoptables, Sarah MacLeod.

Abbott’s daughter knew about Bubby’s news by chance, she immediately came to the shelter with Bubby’s memorable dishes.

“She came forward and told me the story of Bubby. She cried when she saw him and brought his dishes to him. Bubby now eats from the dishes he once did at the man’s house.”

Sarah was too in love with the tabby cat, she suggested keeping a sweet 3-legged Bubby, she clearly sensed that Bubby was her forever feline companion.

“I knew I wanted to keep Bubby forever before I took him home.”

Sarah continued: “We weren’t in the market for a cat so my boyfriend needed convincing.”

Soon after that, Sarah figured out Bubby was the one who acclimated quickly in the house.

“I came home from work to find Bubby and my boyfriend both on the floor. Bubby had crawled onto him. Neither one of us had seen him do this before, but I knew he won him over.”

Despite having only three legs, nothing stops him from being smart, charming, and he knows how to get what he wants. Now Bubby has a loving home with human parents and his woofy friend, they loved to have a playtime together.

“Bubby with his sad human eyes was loved once before and he is now again. He purrs the minute he wakes up in the morning and as he goes to sleep every night. He’s never asked to go outside once. He must know that he’s home now, for good.”