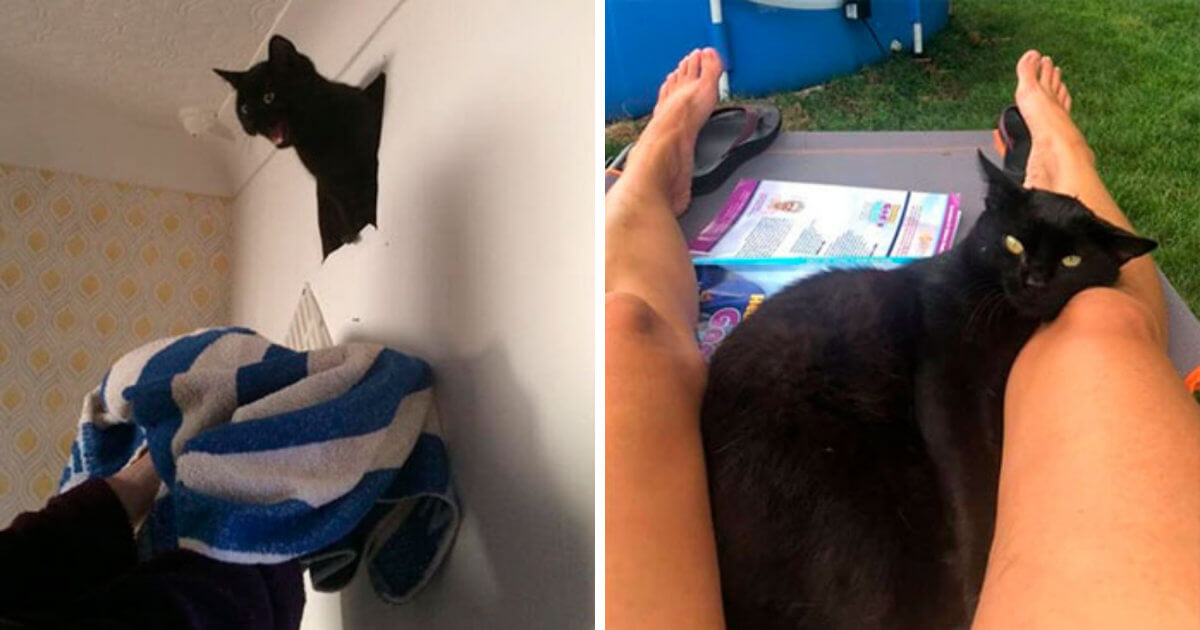 You were looking after your neighbor’s kid while they are away, and there’s a cat coming down from upstairs, approaching you with a gesture that demanded some food. The cat looked like it wanted to steal the child’s thunder and drew your attention to it. You were flustered and phone your neighbor and asked them about the furry pal. Turns out, your neighbor never owns a cat before, and that was an unexpected visitor that seemed to familiarize itself with the new home. While this incident might sound strange at first, we all know that cats are avid wanderers, and they can rest wherever they prefer, like up in the trees, the roofs, or .. even in someone else’s houses! The Facebook group “My House, Not My Cat” is where Internet people share a common event they encountered, which relates to our feline friends. These hilarious pictures have been spread in the community since October 2016 with less than 2k members, but have now expanded to 42.2k members worldwide! (we can say that this is a global incident now)

Among thousands of pics, we have collected some of the best representatives to show how cats are gradually declaring their domination over us. Scroll down and vote for the cutest invader, and read the interview with the group’s admin and founder – Stevie Holcomb, below. Check out our previous part too: Part 1 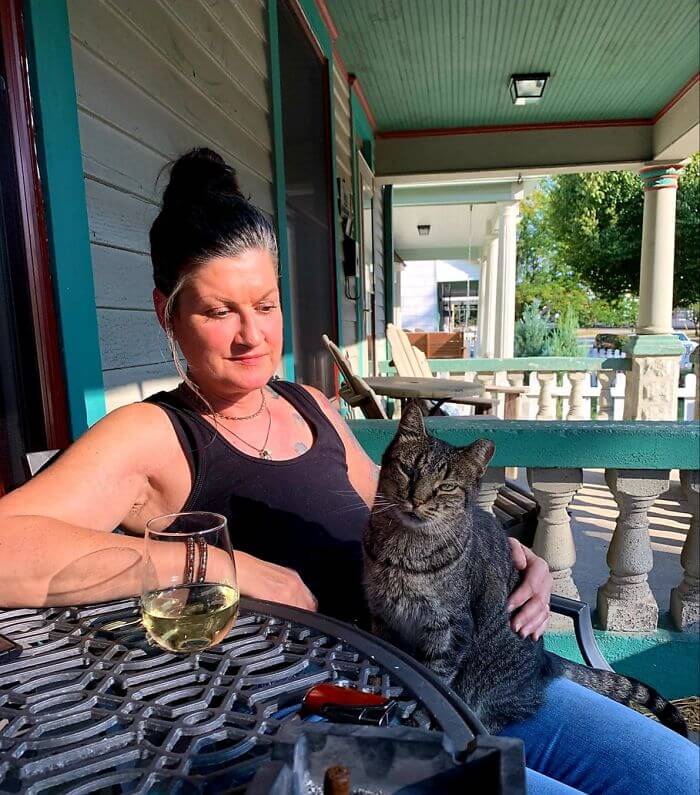 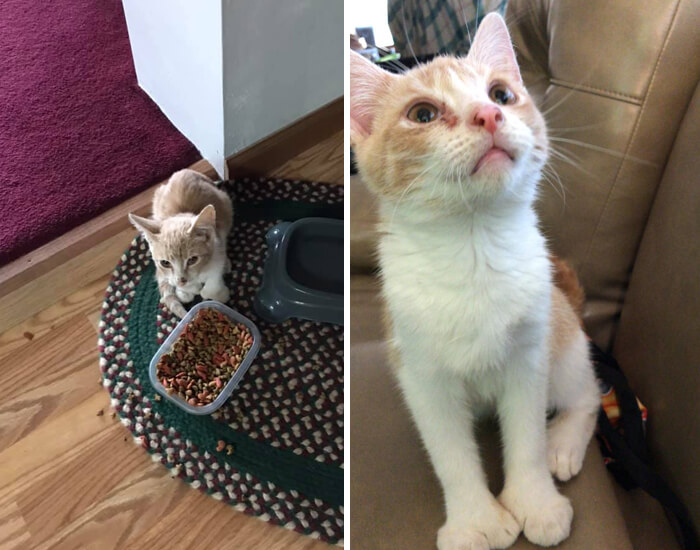 Stevie was overwhelmed with joy when the "My House, Not My Cat" group reached over 30k members. The last time an article about the page was uploaded, there were only 20k members, and the community has grown and expanded itself to 30k, and now 40k. Stevia sure must be proud, as a 50 percent increase is such a huge milestone!

Every time she logs in Facebook (about once an hour), there are at least one or two posts pending for her to accept, so the posts are never overlapped and always refreshed. "With 7 admins and mods that’s quite a lot," she said.

The COVID-19 lockdown has even brought the community even closer, since people are spending more time at home, so they have more time with their pets, official and unofficial. "People love the group. There’s no way we could get rid of it. It’s amazing how many people get cat visitors." 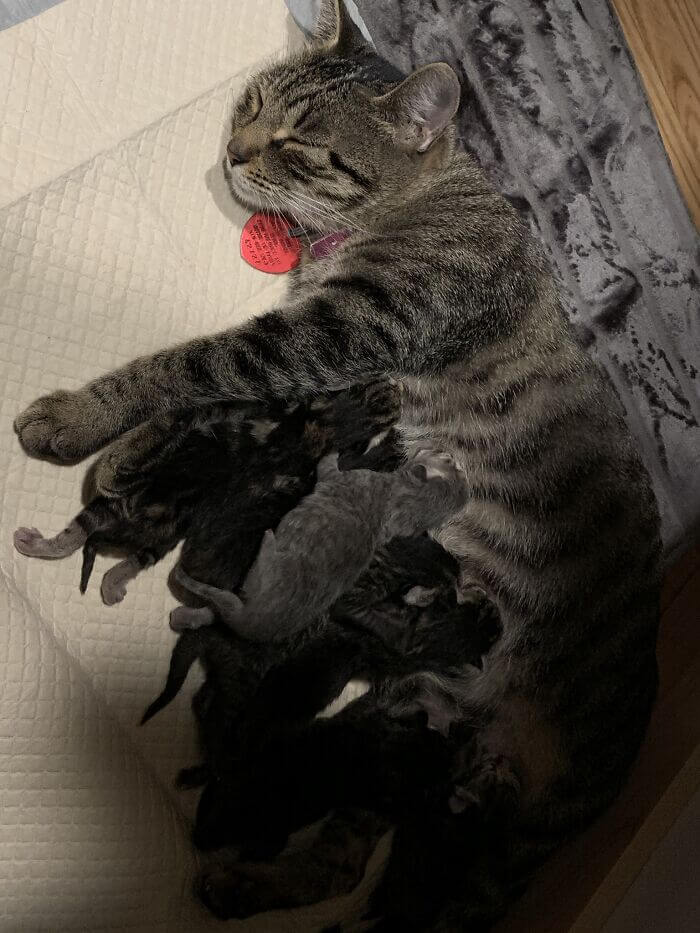 Stevie is excited to share some of the group's plans for 2021. She stated that they'll keep "moving along" as they have been. But before a new year knocks on the door, many events will be organized for the members to join: "We have a surprise for Christmas—a 'gift' from the admins and a special thread just for the members. We just hope more people get mystery cats!"

Last but not least, the founder made some notices about the group's content. She said that all posts should be able to satisfy the group's criteria, or they will not be approved. "If they don’t, it’s usually because of rule 5 (has to be your experience, your house and not your cat) or rule 2 (no viral content, fundraising, etc.)." Therefore, members should check through all the criteria, so their posts won't be rejected. 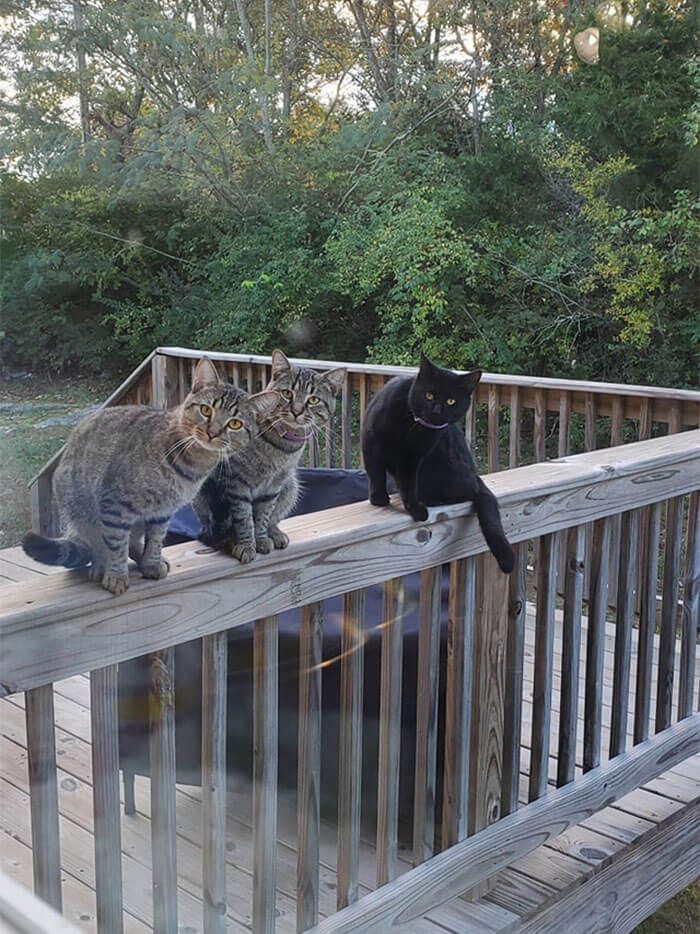 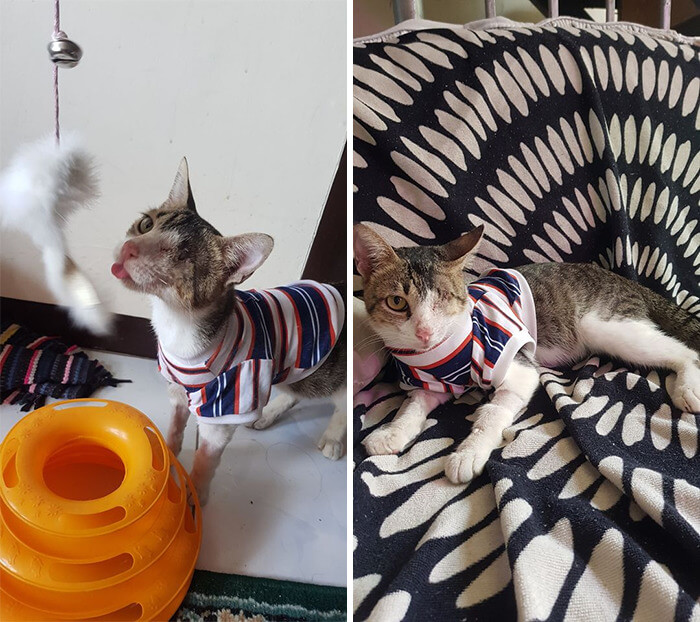 Here are some pictures of our handsome Stanley! He was found in front of the house, he seemed to have gone through something horrifying, since his eyes were dislocated, and he was covered in dirt. After rushing him to the vet, we found out that his eyes had to be removed, and needed shelter to recuperate. Therefore, he has been in our spare room ever since, and we also took care of his wounds.

Yesterday, I brought him to the vet to remove his stitches, get him neutered and update his vaccination situation. Luckily, he's been recovering really well and even gained some weight! Stanley had to wear a shirt 24/7 to prevent him from scratching and licking the anti-lick and flea meds on his nape (the brave boy doesn't seem to mind that much).

After accompanying him throughout the recovery, we couldn't give him up for adoption and decided to take him in forever! Stanley is such a sweet boy who loves belly rubs. He's also well-behaved who doesn't bite and scratch our furniture.  The next step is to introduce him to our sassy tortie girl. 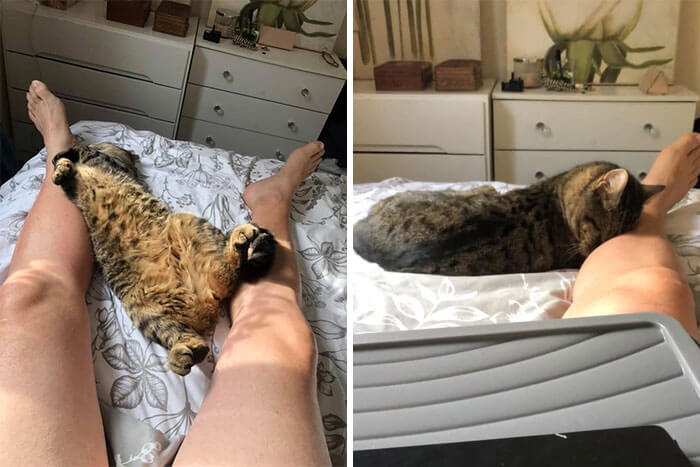 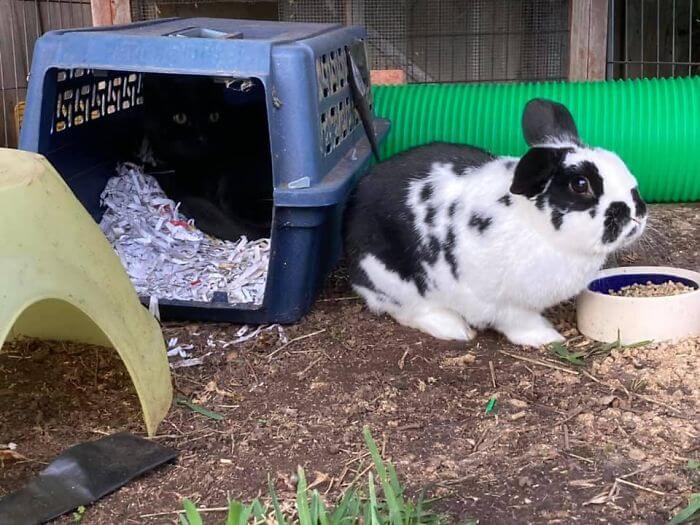 The reason why Stevie created the group originates from her constant exposure to memes about cats in other people's houses. Finding these memes hilarious, she did some further investigation about if there is a group on Facebook that people only share about random cats intruding on their homes. After seeing no results, she took the initiative and started one.

The more people join the group, the more posts wait for the approval. Therefore, Stevie shared that she needs to be more selective on what gets featured and what's not in order to extract the best content for the group.

According to Stevie, lots of people that first joined the group had the misconception that strange cats won’t just wander into their homes, or even if they do, they won't likely to come back. But then they were all shocked and surprised at how many people have had their homes visited by an uninvited guest. Some even experienced themselves and posted on the ‘My House, Not My Cat’ Facebook page. 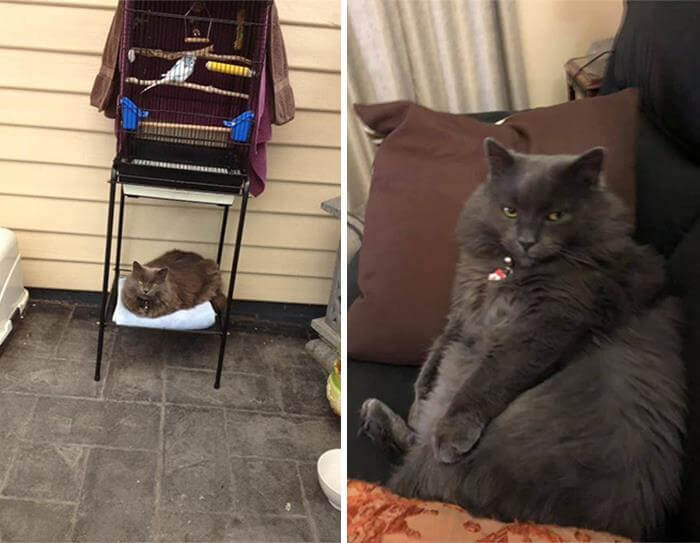 One spring, he showed up and seemed to invite my two female cats for mating. My girls, on the other hand, stood their ground and rejected him, as they were not "in the mood." I considered taking him to the Cats Home when he broke into my house, ate all of the cat food, and sprayed. They claimed he would most likely be put down since he would be difficult to adopt. Hearing the result, I chose to take him in. I stuffed him with food till I could pet him and made an appointment for him to be neutered and microchipped at the vet. Oskar is his name, and he's been with us for the past six years. 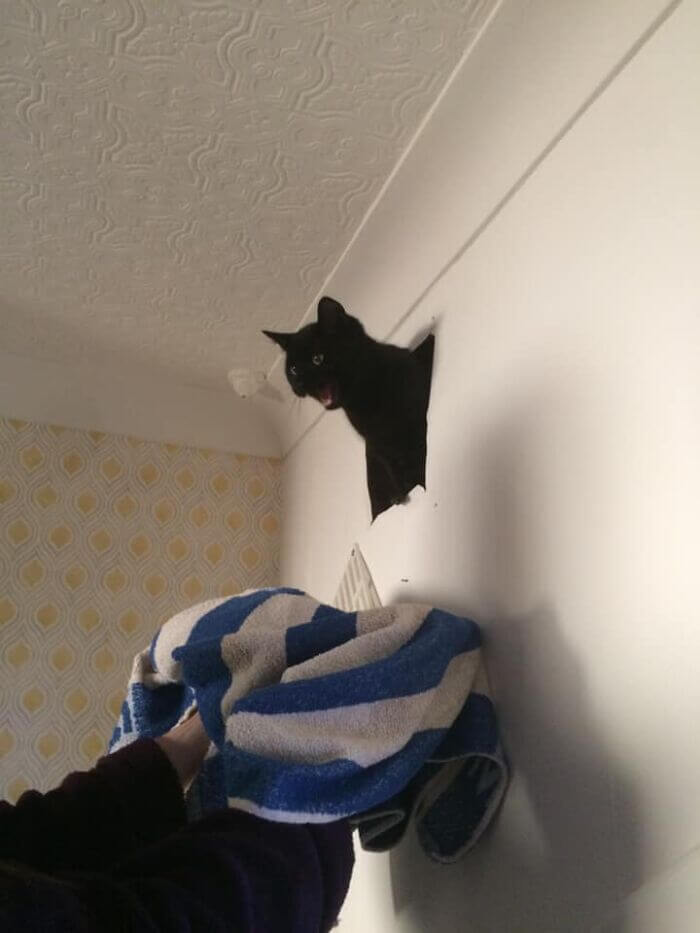 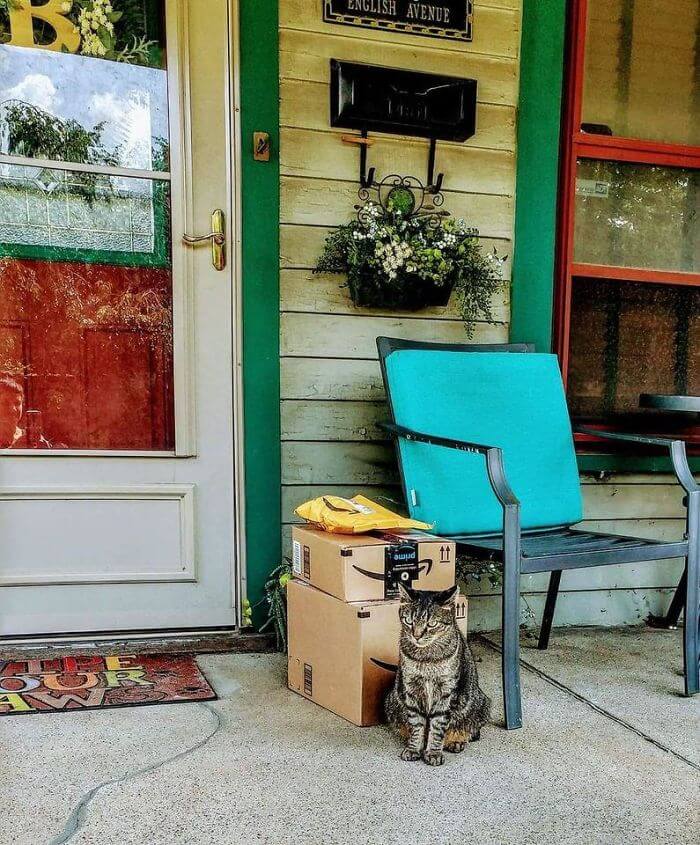 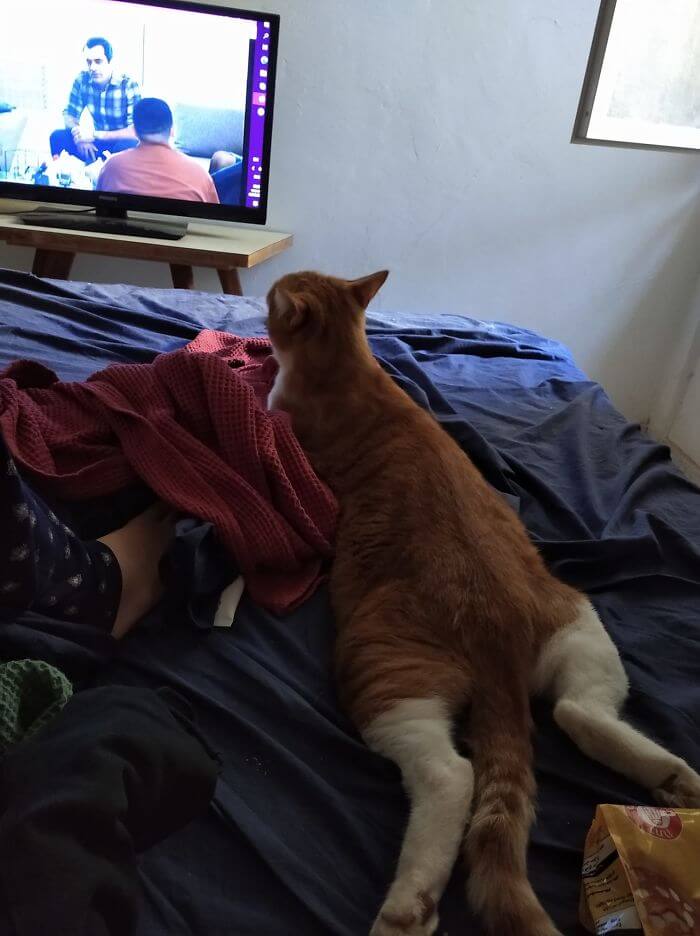 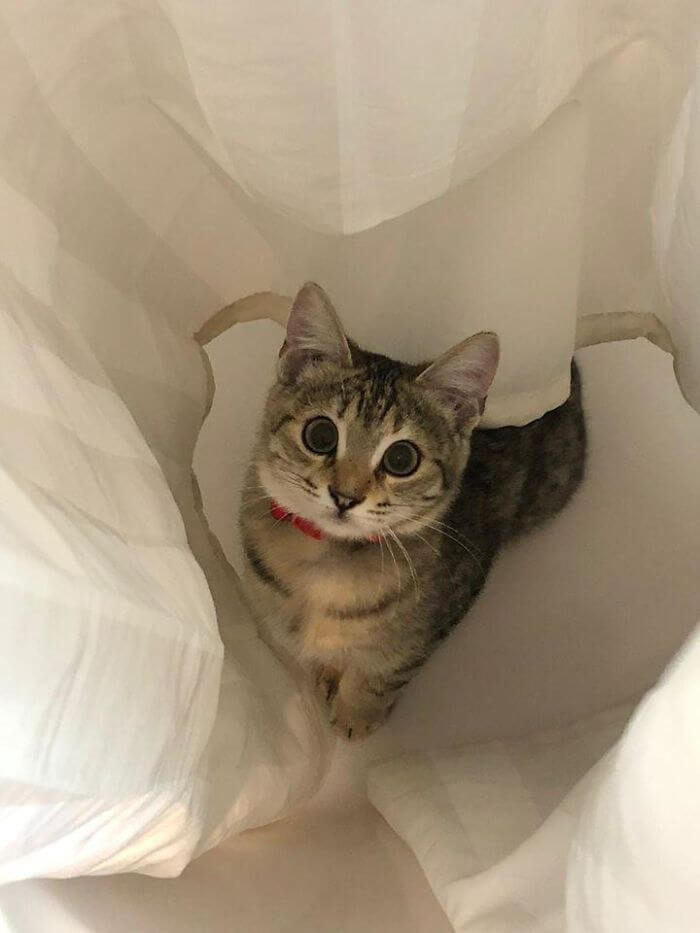 The furry stalker followed my daughter home from the nearby store, walked right in the house, and snuggled up. She seemed to be friendly, loving, and cuddly at first, so we thought she must have an owner. After one week of searching for her owner, we figured we would keep her. From being a loving sweet kitty, she turned to a maniac daredevil . She brings in at least one dead bird a day, body slams our other cats, hits and hisses at the dog, and will steal anything and everything you might leave on the counter. She jumped into the oven once and we even found her inside the refrigerator. An unknown force has kept her alive and well throughout all these stunts, and although we are always heart-dropped, we love her a lot. 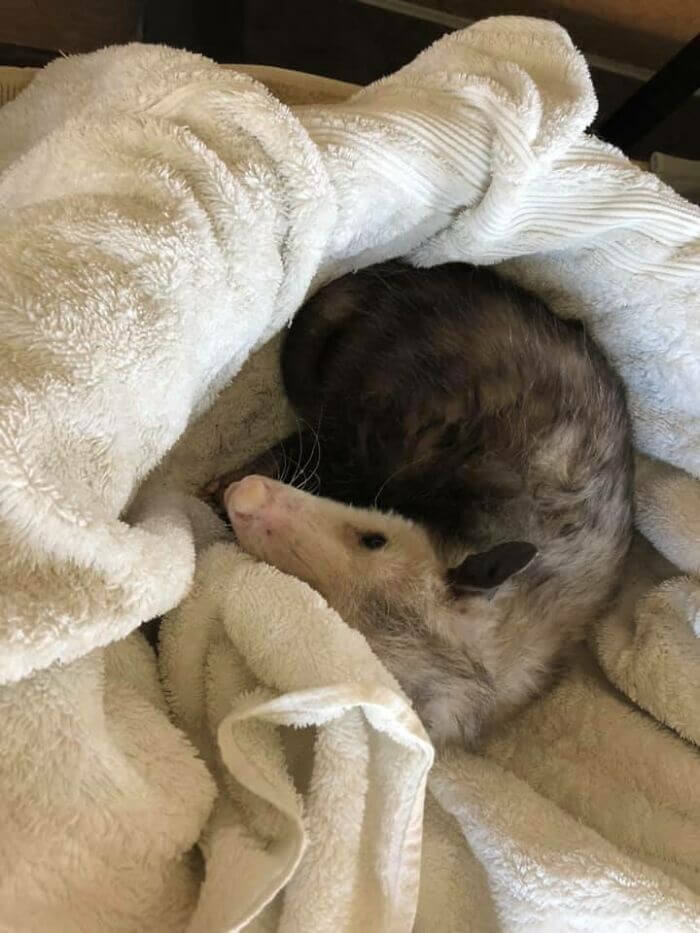 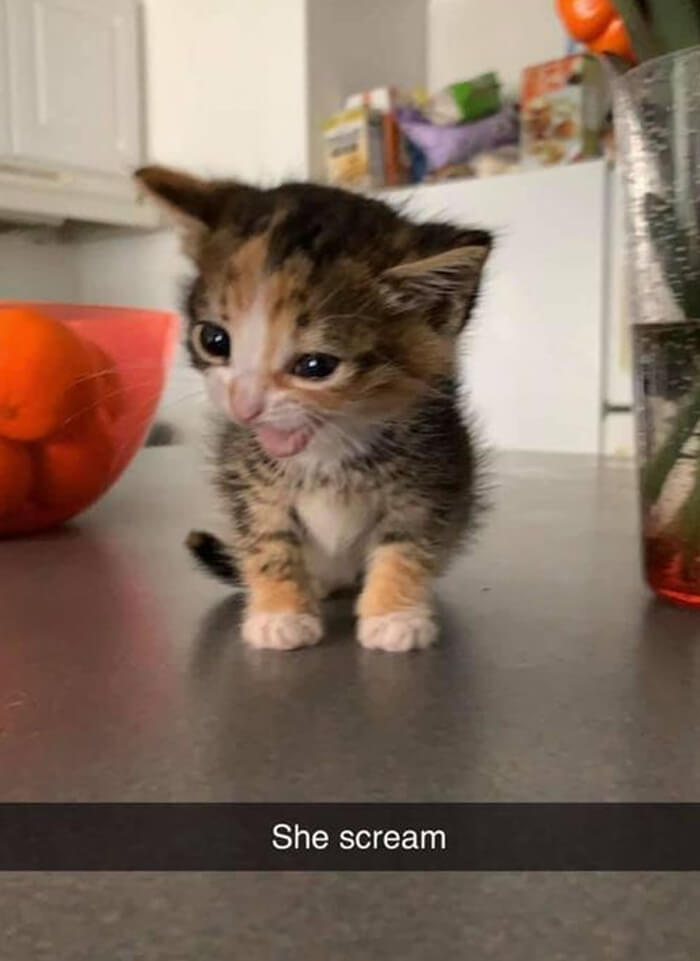 One night, my roommate was taking the trash out when she heard a weak meow. Approaching the sound, she found out this small, hungry bean. We named her Miso, and she was about 4 weeks old. We might keep her if she gets along with other cats, but Miso also had a lineup for adoption, so we are taking care of someone else's child! 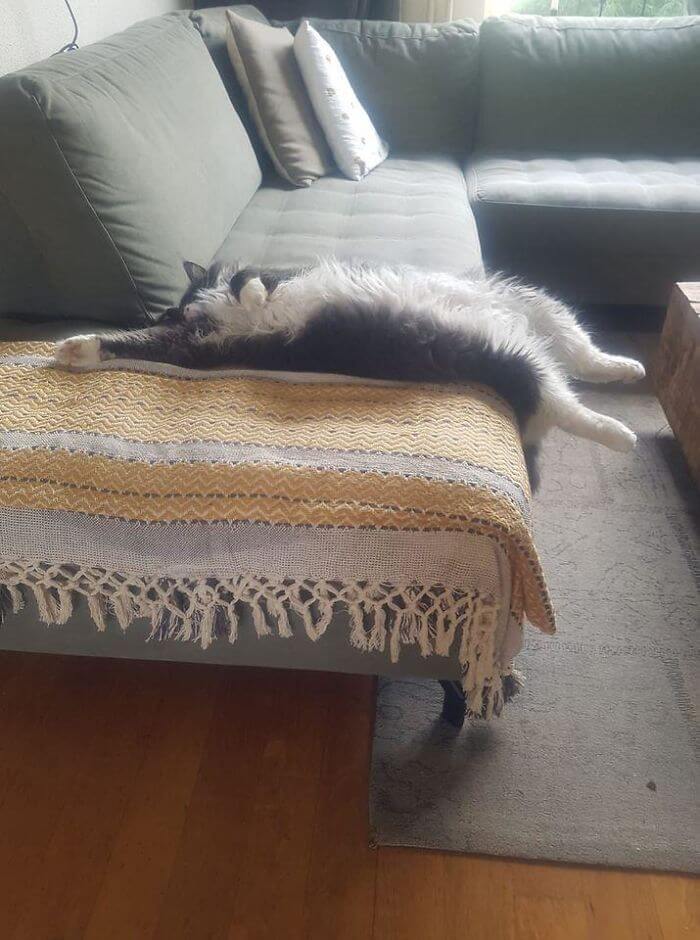 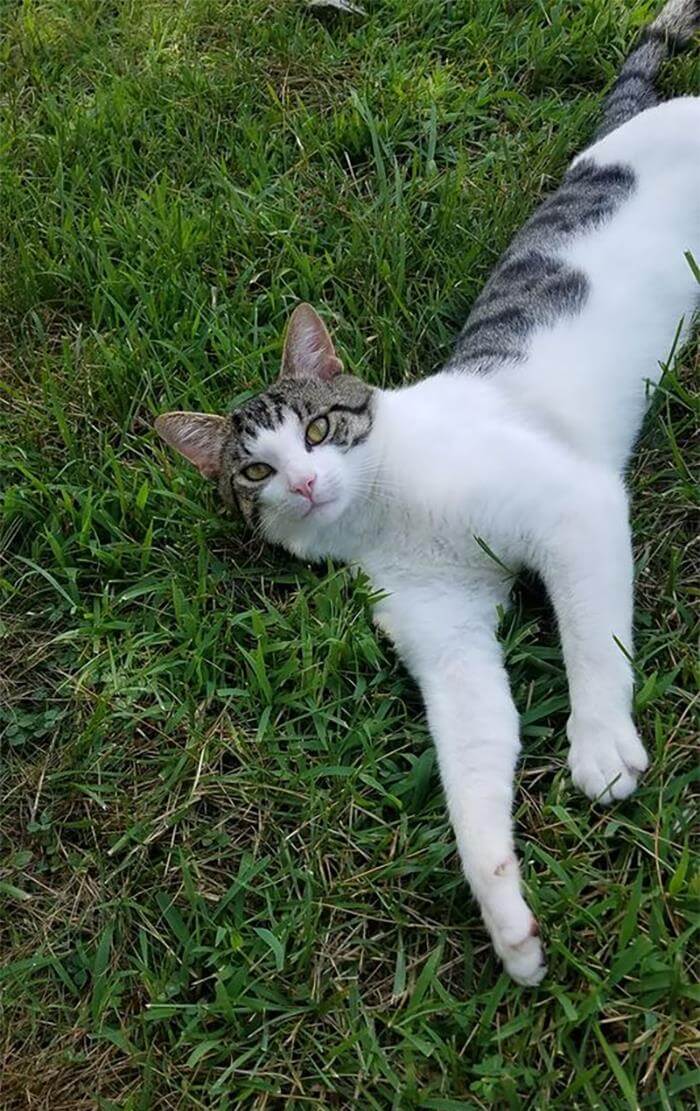 I have cried for the last 3 days. I have never been a cat person. I grew apparently VERY attached to my not my cat. I have bought him cat toys and a giant kitty tower. He went missing 4 days ago. I have cried since day 2. I have kitty kittied and walked my property so many times. Yesterday I broke and sobbed just knowing something had ate him. I checked at 2 AM for the probably 20th time to see of he was home...nothing. This morning I cried again...my not my cat came home!!! He ate his food like he was starving and then chattered and meow at me like I never fed him. I see now how humans become cat slaves...there has to be a magical bond somewhere. 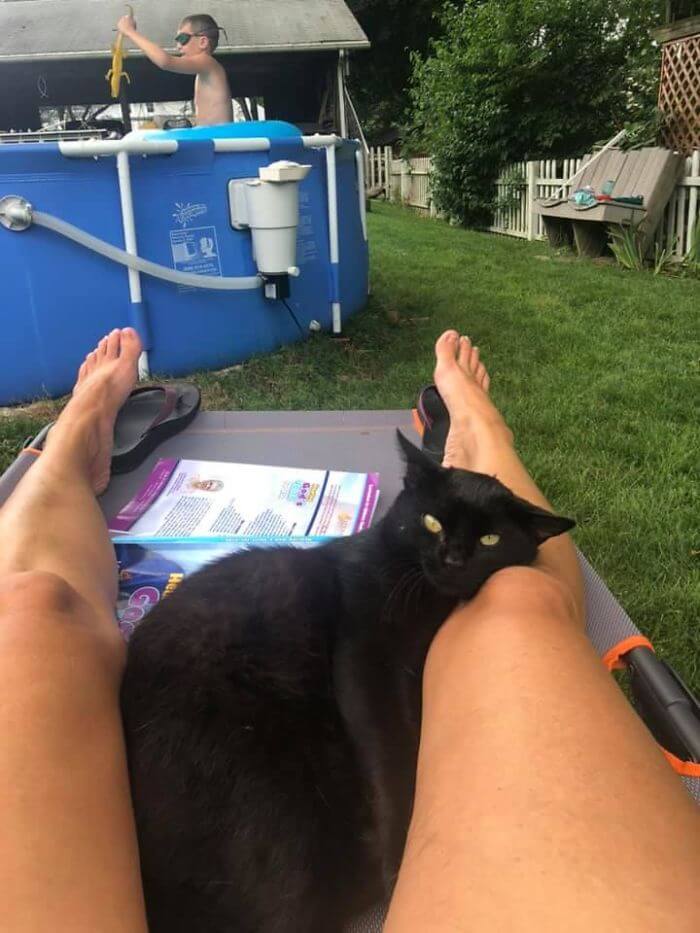 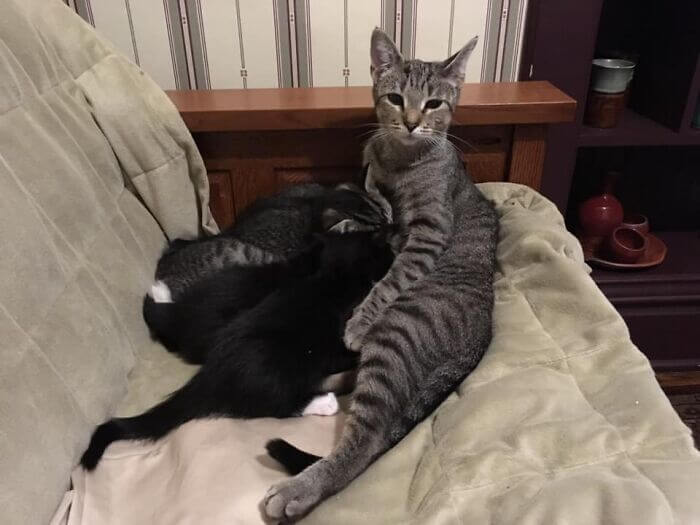 This very young stray started visiting our yard this summer. Her visits became occurring daily; it became obvious she was spending nights there, too. Then she gave birth to 4 kittens under the porch. Soon she moved them into the garage. Next she started bringing them onto the porch . . . then into the kitchen . . . . then one day I woke up from a nap, and there they all were. I don’t think they plan on leaving.

This summer, a very small stray came to visit our yard. Her trips became more frequent, and it was a normal thing that she was now spending nights there. Then, under the porch, she gave birth to four kittens. She quickly relocated them to the garage. She then began bringing them into the porch, then into the kitchen, until one day I awoke from a nap to find them all there. I don't believe they intend to leave. 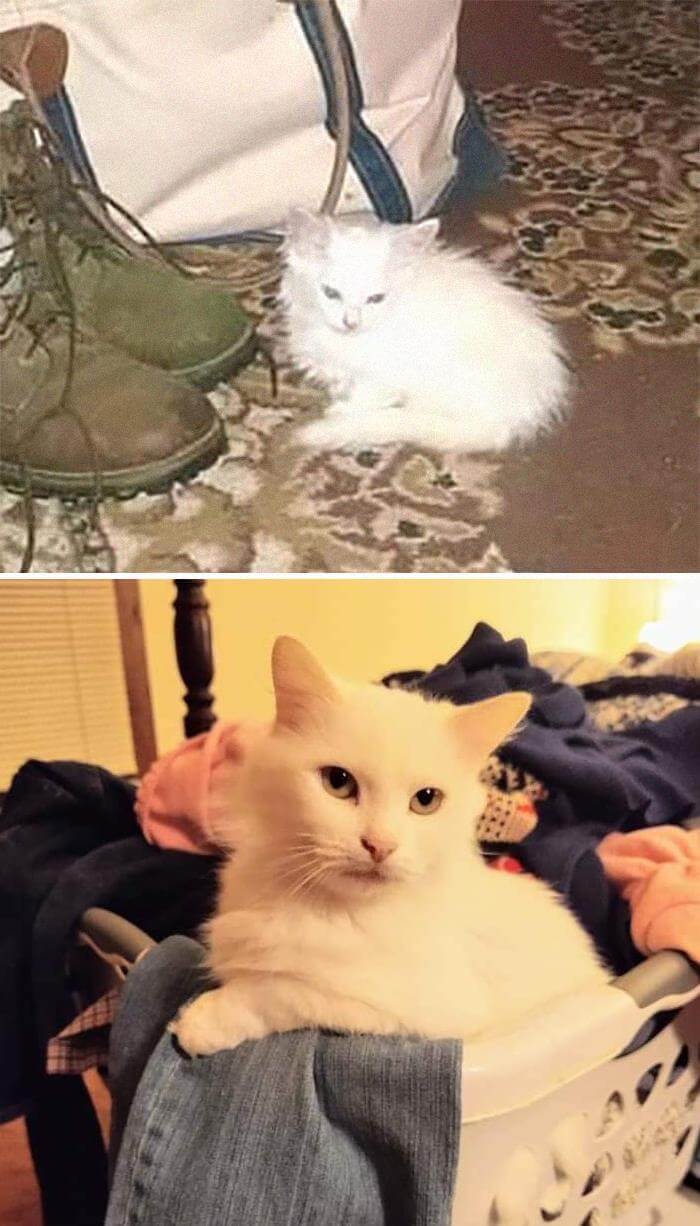 My husband and I searched the entire home, opening cabinet and closet doors in an attempt to release whichever of our cats had become trapped. Kitty was emaciated and had fungus in her ears, according to the vet. She still had her milk teeth because she was so young. We had to massage an ointment all over her ears and let it sit for 15 minutes before rinsing it off to cure the ringworm. She was such a good girl, she didn't oppose us at all. This is when I discovered she was so freakishly little that I could fit her entire body inside a Crown Royal bag, carefully draw the rope just over her shoulders, treat her ears, and keep her secure, warm, and calm until it was time to wash off the goo and let her out. Her fur came back and she fluffed up after five years and a lot of affection, albeit she's still rather little for a full-grown cat. Not My Cat is currently my favorite MoonShine. 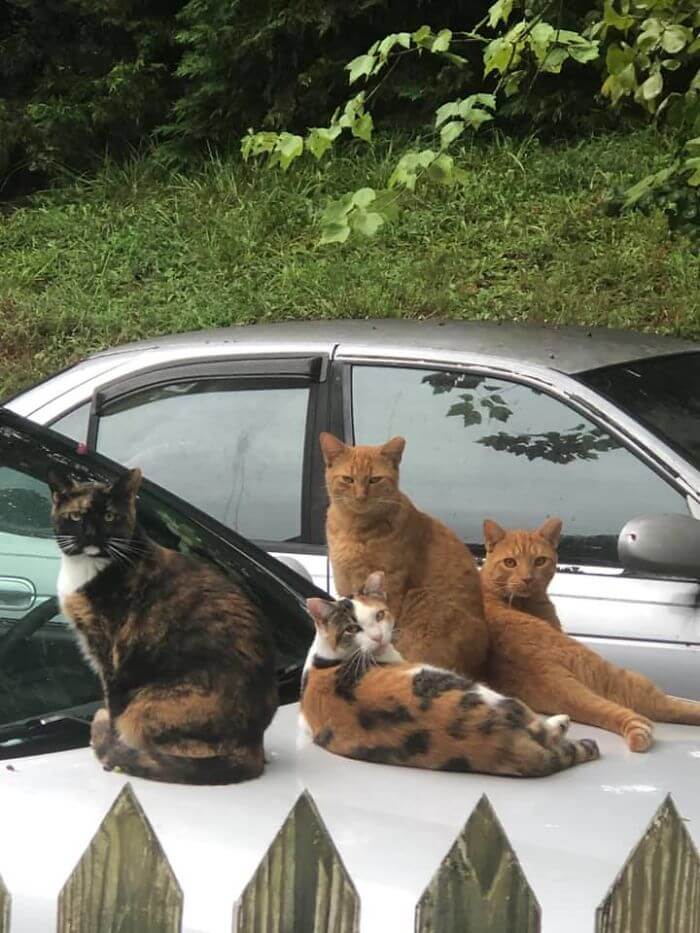 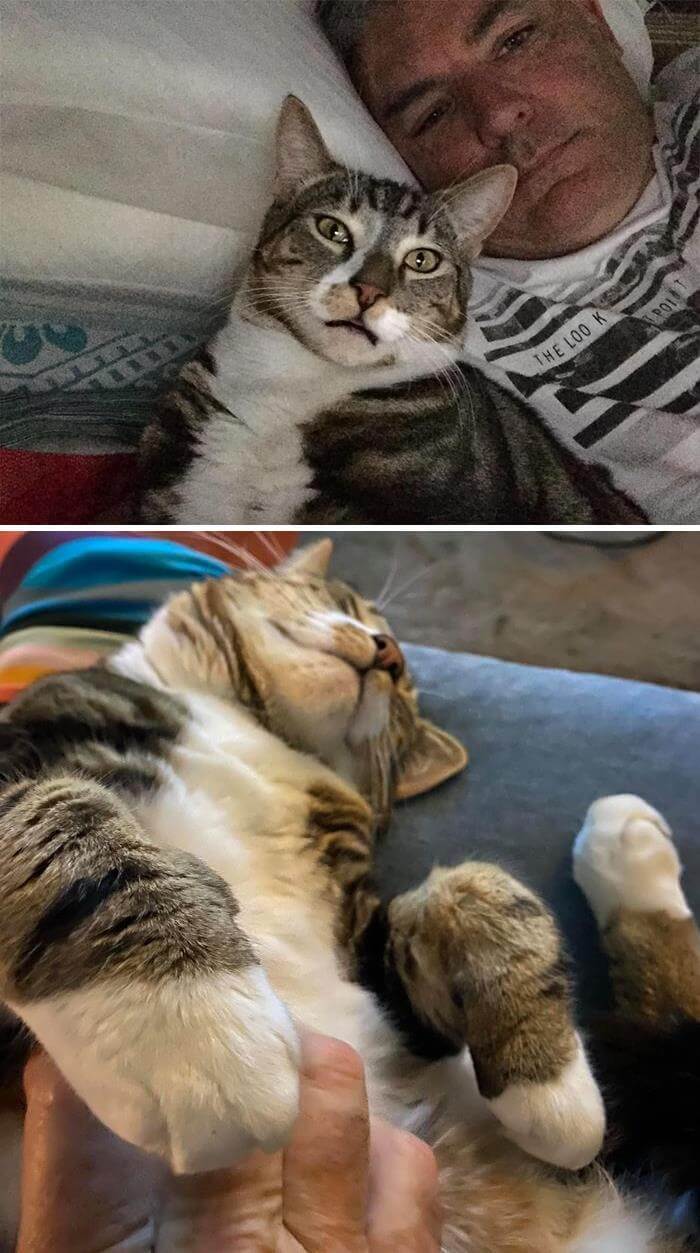 Outside our house, someone abandoned a little tabby cat. He was hiding under a vehicle parked alongside the road. He was meowing so loudly that my two elder kitties were "complaining" to me about it. I walked outside, got down on my hands and knees, and meowed for 30 minutes to the little cat. He eventually emerged and entered my house. He was really frail, so I fed him some mushy cat kibble and diluted milk. We went to bed assuming he'd gone out through the cat door, but he was on the bed in less than two minutes. Now he goes to bed with us everyday!

Brown Cat was around my area for two years before he finally trusted me more and got closer. Pip wasn’t even fixed so I took care of that. Although these hooligans dominated my house, they’re part of Bubba’s crew so we look out for them. 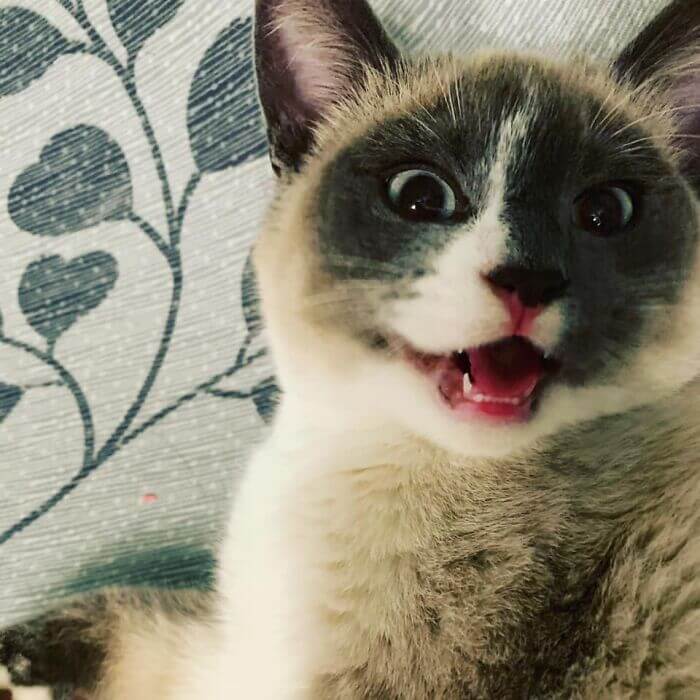 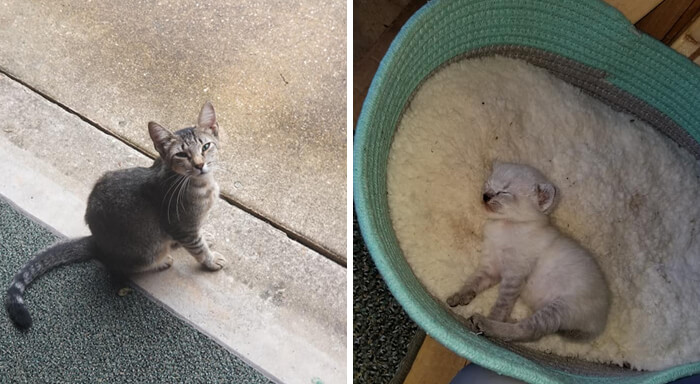 When she was a kitten, she followed my cat home, chill enough to hang around but not chill enough for pets. On the 16th, we were hit by a hurricane, so she took refuge in our garage with a few other "Nmc's." Turns out, she became pregnant and gave birth to a single white kitten. She then whisked it away in a whirlwind. I discovered him in my garage the other day. I'm overjoyed that she sees this as a safe place for her children. 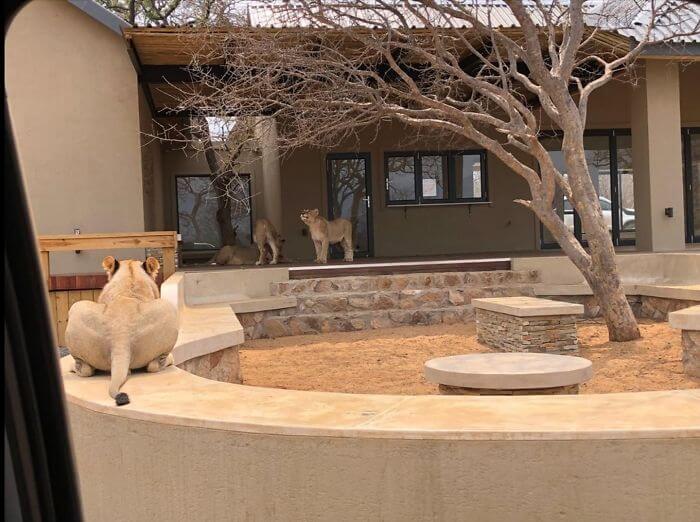 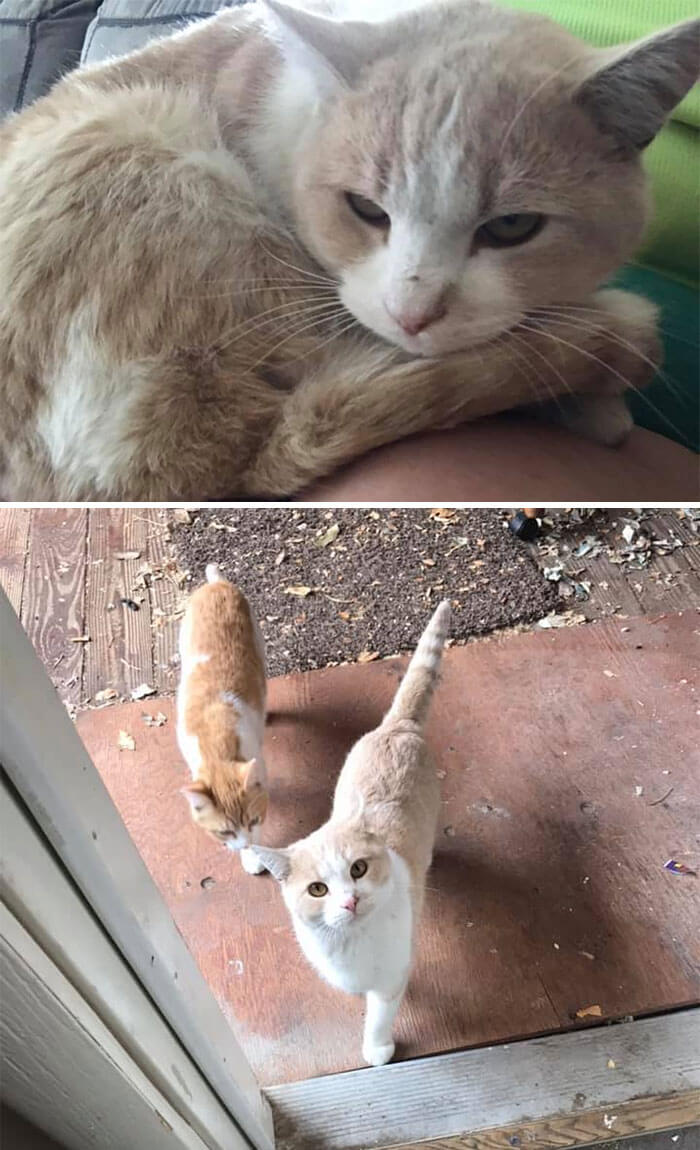 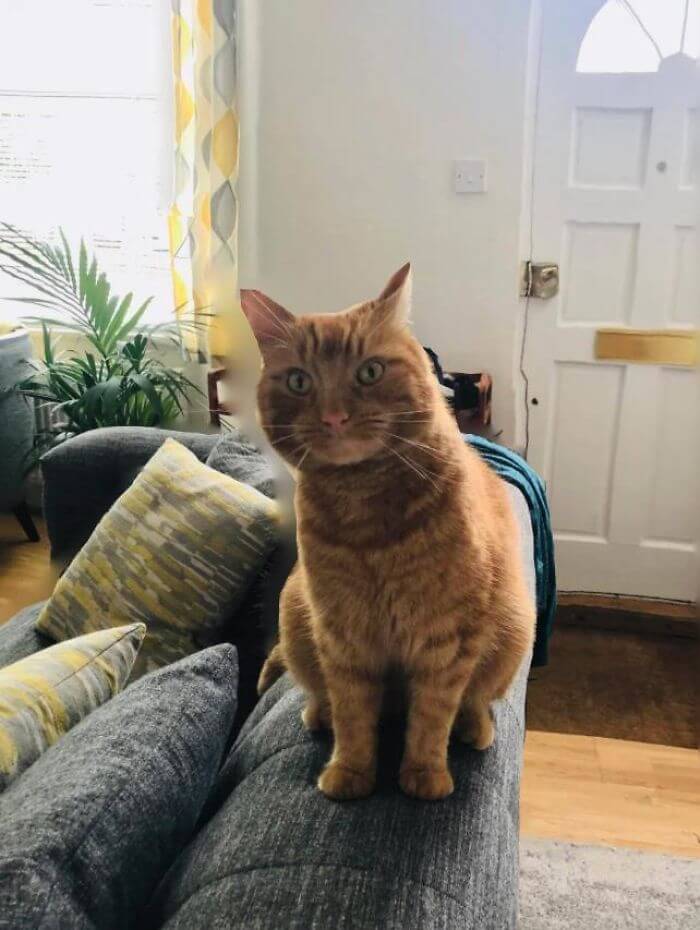 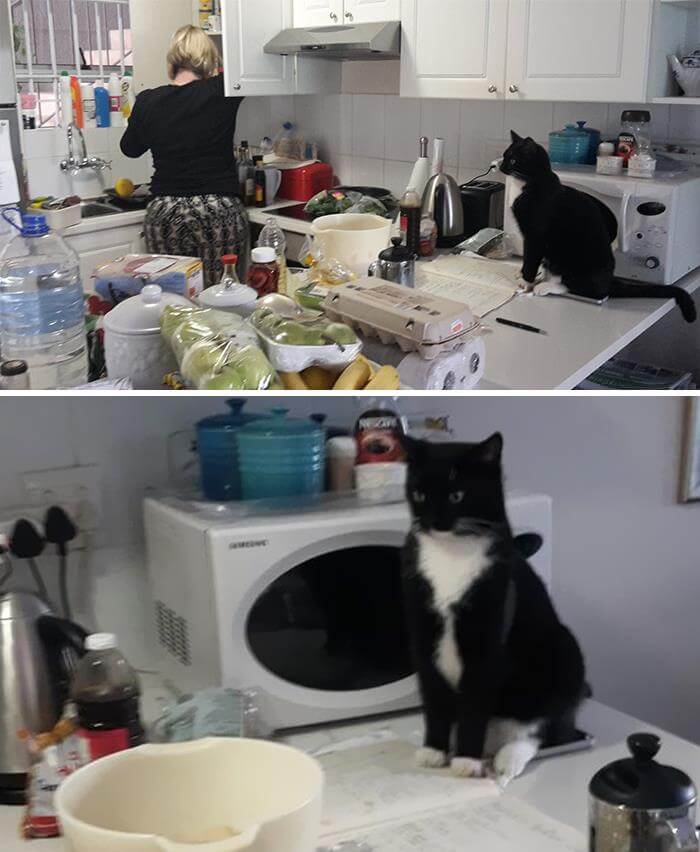 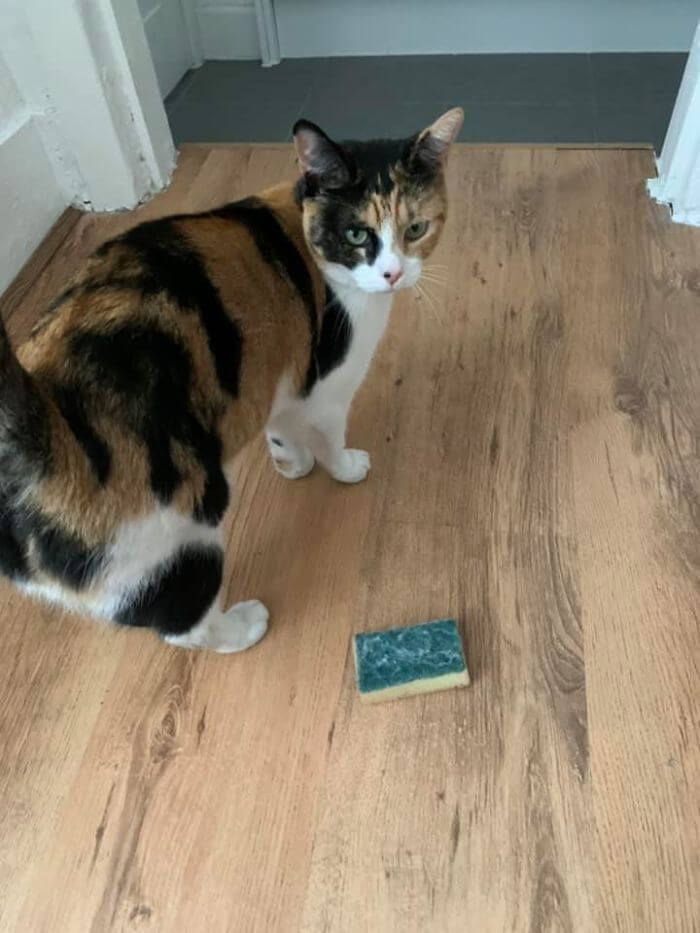