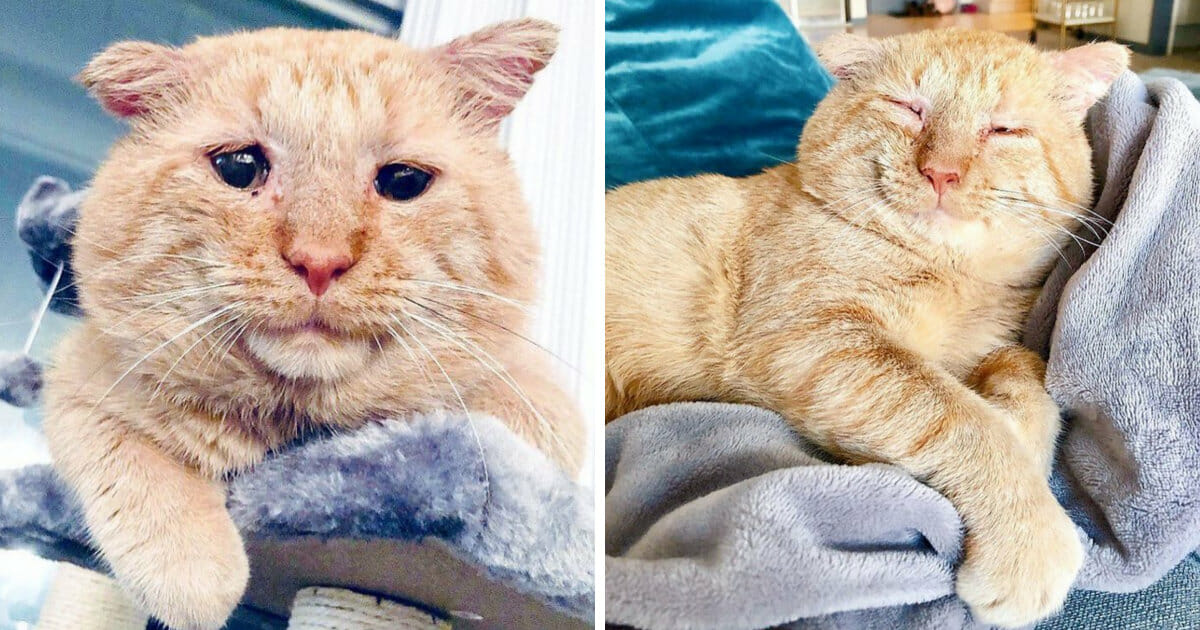 6-year-old Mister Bruce Willis got his name not because his owner loves the actor, but because he actually ‘died hard’ in the streets before he got adopted. Before settling in a forever home, he had been wandering the streets for years. Bruce may look calm, yet his injuries obviously proved his time roaming around like a lone wolf. He had plenty of health issues to deal with: numerous scars, chipped teeth, positive testing for feline immunodeficiency, and unfortunate infections at the shelter. However, the most noticeable sight from the tabby cat is his miserable face: an injured eye, the other one is a little droopy, a slight cockeyed ears, and unkempt fur. Battered and broken down, Bruce was one of the last few to be adopted at the shelter.

Suffering many health problems and wearing such a downhearted expression, the poor guy was one of the last options to pick at the shelter

Despite his rough-around-the-edges look, Mr. Willis is surprisingly an affectionate and sweet pumpkin who loves cuddles and kisses. Thanks to his current owner – Sandra, who decided to take him in her care, Bruce is able to express such emotions. Seeing Willis’s post by the Minnesota Animal Humane Society on International Cat Day, her heart sank. As her place would not allow owning a pet, Sandra did not intend to have a pet whatsoever, but the heart-wrenching tabby grabbed her attention and sympathy so much more than she realized. After months of waiting and searching but no response for the poor cat, she decided to give it a shot, asking the landlord to adopt Mister Willis, because he deserved a loving home. It took patience and persuasion, but a miracle finally happened! Her landlord gave permission for Willis to stay with Sandra, and within a year, the orange tabby changed remarkably — from being the “saddest” cat to the “happiest” boy, who loves his forever home very much.

The purrfect match – Sandra and Bruce

Sandra got Bruce a collar, shelter, food, treats, belly rubs, and a 122k follower Instagram account so that everyone can give him the love he deserves

The first night arriving at his forever home, Mr. Willis couldn’t stop purring and cuddling next to Sandra. He definitely knew Sandra would be his life saver and give him everything he has been missing for all those years lonely in the streets.

Bruce’s unrecognizable look after showered with care and affection every day, with bowties too!

“Mister Willis is FIV positive. It stands for feline immunodeficiency virus and it’s not as scary as it sounds. It basically means that he has a weaker immune system than ‘normal’ cats. When I first got him, he had a cold, ear infection, and eye infection that he got at the shelter. It was a little harder for him to fight it off because he’s FIV+ but he eventually did, and right now, I can’t notice his disease at all. I’m just making sure I’m doing what I can to keep him happy and healthy.”, Sandra said.

Their first year was not entirely smooth, as Bruce is not in his best health condition, they constantly hit the vet. However, he was able to fight off all the infections and recovered well.

Props to Sandra for taking care of Bruce and transforming him from a battle veteran to a safe, happy, loving cat!

A must-see picture of Bruce’s loaf – his ultra-kill pose!