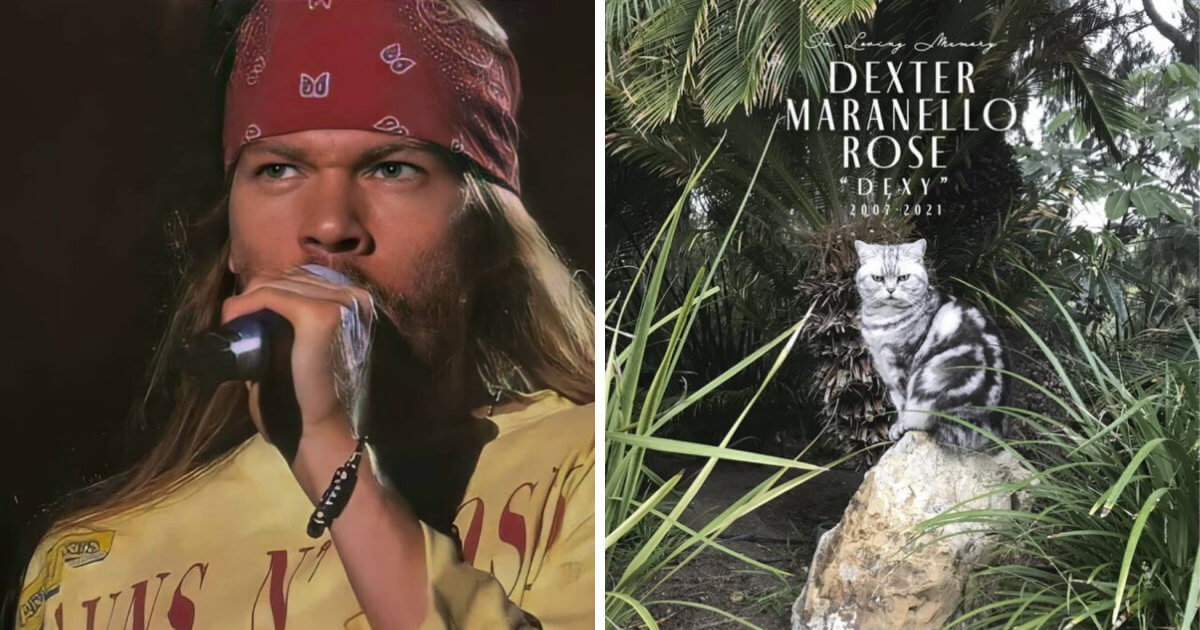 Animal kingdom truly impacts everyone’s personal life, no matter you are a normal person or a celebrity, male or female, strong or weak. Recently, a famous frontman from Guns N’ Roses Axl Rose has overcome huge distress that he had to share on Twitter, which contradicted what people might have thought about this tough guy. One of his beloved companions, Dexter the 15-year-old kitty, passed away on November 17th. Once in a blue moon, a rock star revealed a bit about his soft side. A lot of fans expressed their condolences and shared their anecdotes about the stories of lost animals who had been with them for a long time.

Axl Rose is an animal lover, in full disclosure. His profile picture on Twitter is a black French Bulldog. In one interview a while ago, he declared with Jimmy Fallon that he owned a zoo at home.

“I have a zoo. My animals (wolves, parrots, dogs, cats) are my buddies. They need lots of love and attention.” – He said.

The main reason that leads to the talented rock singer’s love for animals is that he used to be abused by his step-father. He was hungry for love and affection deep inside his heart. But he decided to scream on the mic and became a king of rock. Guns N’ Roses has achieved a lot of success thanks to Axl and the band. Music lovers now have not only admired Axl’s contagious influence but also his gentleness and softness for animals.

Axl has three kitties, Dijon, Whiskey, and Dexter. Dexter had been Axl’s companion for 15 years. A white and grey tabby kitty whom he adored every inch of his fluffy body. Unfortunately, the furry buddy crossed the Rainbow Bridge out of Axl’s sorrow. The loss of Dexter was unbearable for the rock star, so he shared a poster of Dexter being atop the small rock in the jungle. On the poster, it was written: ” In loving memory, Dexter Maranello Dexter “Dexy”. 2007-2021.”

Axl’s fans were firstly shocked, then they shared their condolences with him. Some people were kind enough to tell Axl the stories about their dearly-departed felines. After three days, Axl went on Twitter again to give thanks to all the support and sympathy that came from his beloved fans to help him to overcome the grief.