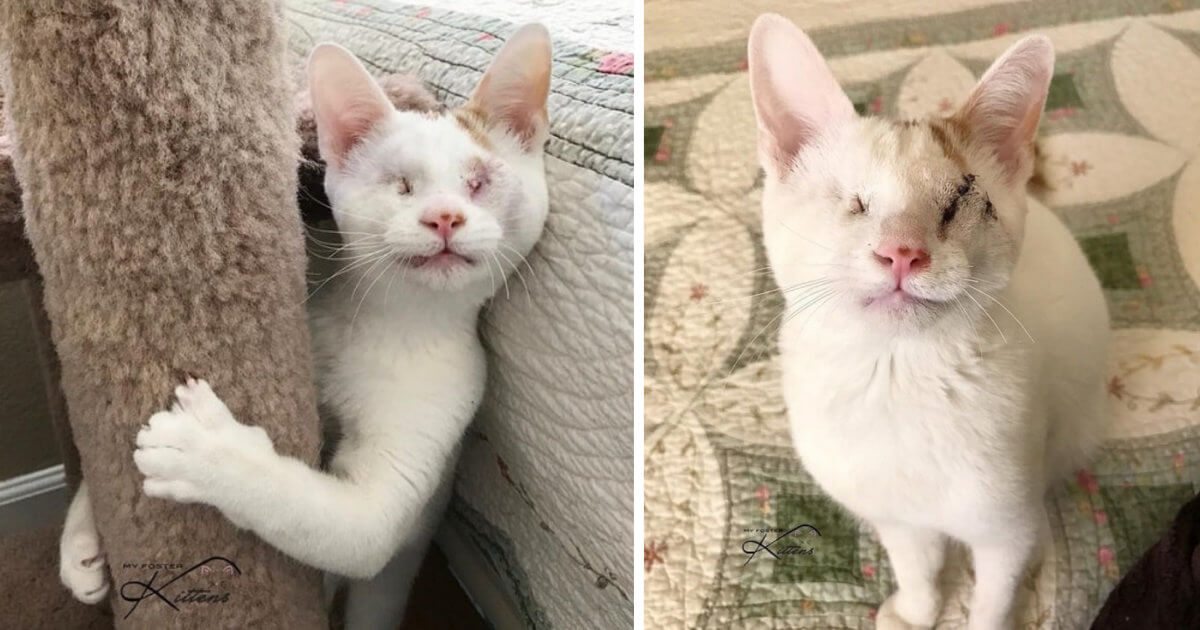 You can only live once, but the second chance is always worthwhile for anyone, including this blind kitty!

Wally the cat was spotted crying out loud on a tree near the Walmart parking lot. Nikki, who happened to be Wally’s mom-to-be, received a call from her friend. The person asked if she could take the poor cat down and help him. While Nikki was at work, the woman instructed her friend to retrieve the cat from the tree.

A while later, Nikki came to see the cat. He was found sick and severely injured in his eyes. It was said the cat was grateful for saving his life, so he expressed gratitude to Nikki with a lot of purrs.

“His eyelids were sealed shut from infection.” – Nikki said.

But as soon as she picked the cat up and brought him home, Nikki learned that Wally had the sweetest personality ever. He kept meowing at the woman as if he wanted to give thanks to his savior.

The day after, Nikki scooped Wally the cat to the vet. It was said that Wally had a condition called microphthalmia, a congenital disorder in which the globe of the eye is unusually small and structurally disorganized. Due to being abandoned on a tree for a long time, his eye sockets were drastically damaged.

“Because his infection was so bad, he has endured two more surgical procedures but will have his stitches removed, and thankfully he will have no more operations.” – Nikki said.

Regardless of his trauma and blindness, Wally didn’t seem to be afraid of humans. To anyone’s surprise, his playfulness and quirkiness started to bloom. Nikki was so proud of Wally’s wagging tail and kneading paws whenever she was around. He could not see but inside of his heart, he knew who loved him wholeheartedly.

“He is healthy and happy and loves to play. He is such a good inspiration to me and others that despite having disabilities, it does not hold him back whatsoever.” – The woman said.

Wally is now happily living in Charlotte, NC with his forever human. Wally loves making biscuits and his bakery is doing so well! He also loves to show gratefulness to everybody by his little dance. How adorable this guy is! Hopefully, Wally will still be the best version of himself that his owner adores.