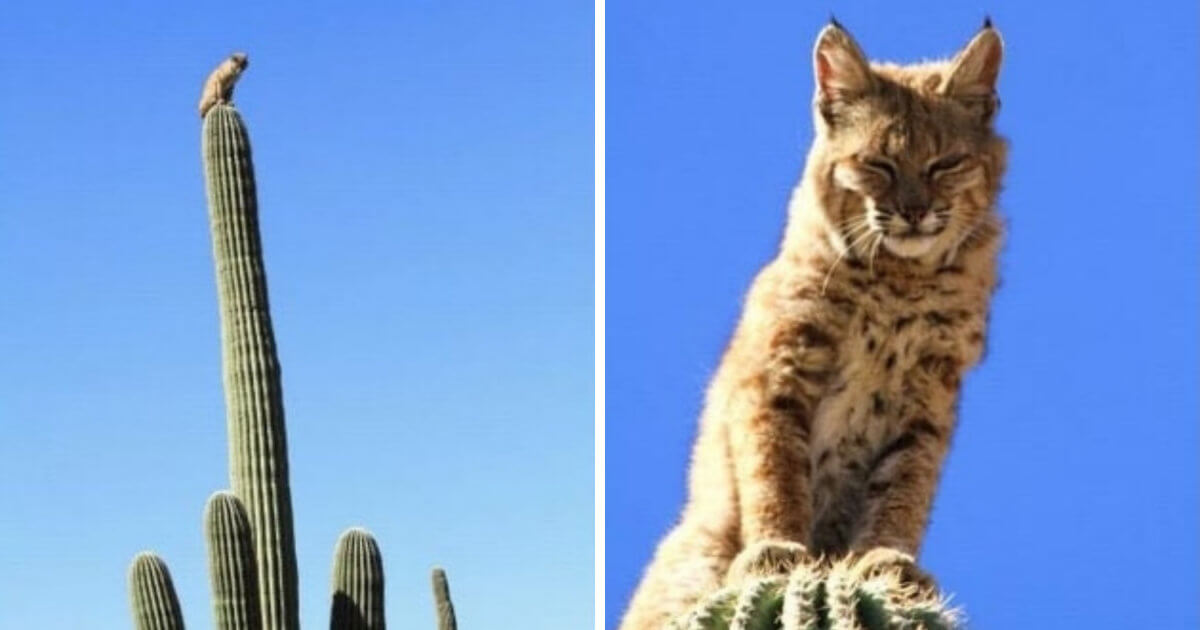 I know your beloved feline likes high perches such as kitchen counters, roofs, or even trees. But have you ever seen a laid-back kitty chilling on the top of 40ft large saguaro cactus after being escaped from the mountain lion? If you don’t know a full story, you may think a cat is just…cats. Doing weird things, being distant, arrogantly watching people from above, those descriptions can be pointed out in one picture. One man photographed and documented the dramatic story in where he is living, Sonoran Desert, Gold Canyon, Arizona. 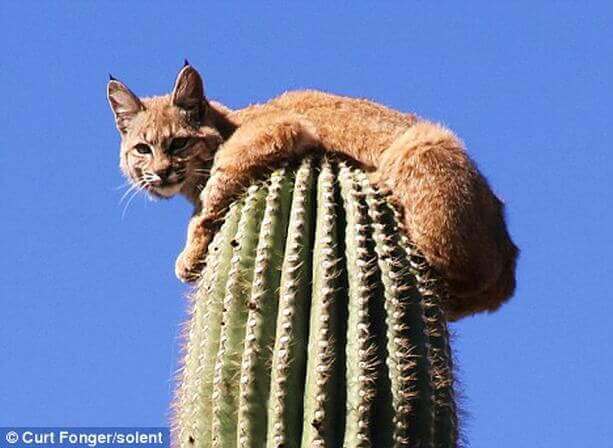 Curt Fonger and his wife Marta Saint-James are passionate about traveling and capturing the most epic landscapes around the world such as Argentina and South America. Fonger started his career in 1974, he is now a professional photographer in Arizona. One day, Fonger’s buddy called him to recount a phenomenal story in the desert. 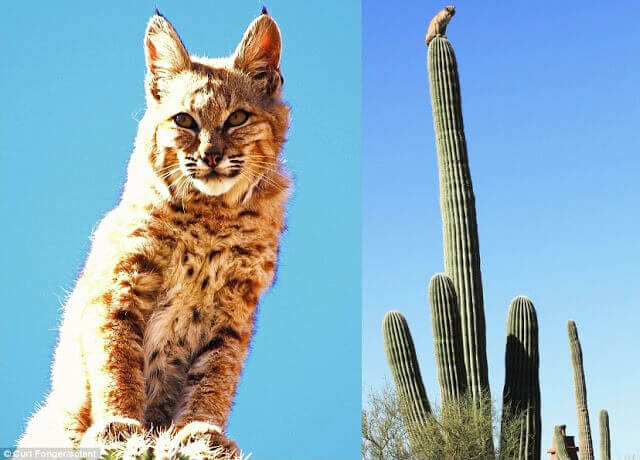 “A friend called me at 7 am saying one of his workers had seen a bobcat being chased by a mountain lion.”-He said.

“It ran across the road in front of his car and climbed up a large saguaro cactus at the roadside, with the lion hot on its tail. The lion didn’t pursue the bobcat up the cactus but circled the base.” – He continued. 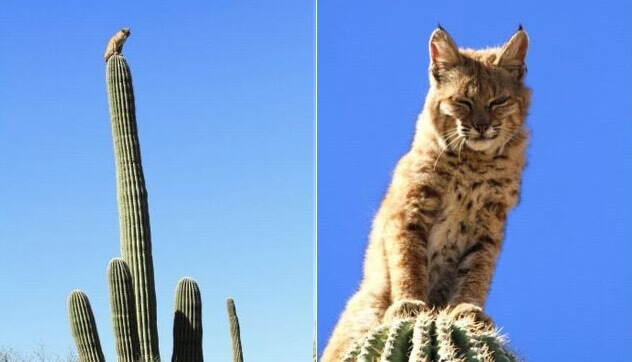 It was reckoned that while the mountain lion was growling at the prey, the cat was chilling on the top of the cactus and looking at the lion from above. After a while, the lion gave up and walked away. However, Fonger was amazed at the cat’s perseverance when the bobcat had been patiently staying there for six hours. Probably the cat wanted to make sure that everything was completely safe. 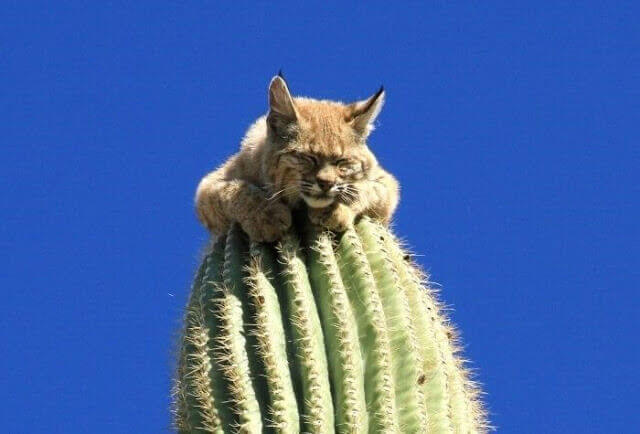 In fact, the giant cactus is rare which takes roughly 100 years to reach 15ft tall. How clever the bobcat was when it chose the highest one to escape from the predator. Fonger also checked out the cactus and there was no blood or fur to be found. He was in awe of how the bobcat could fend for itself. 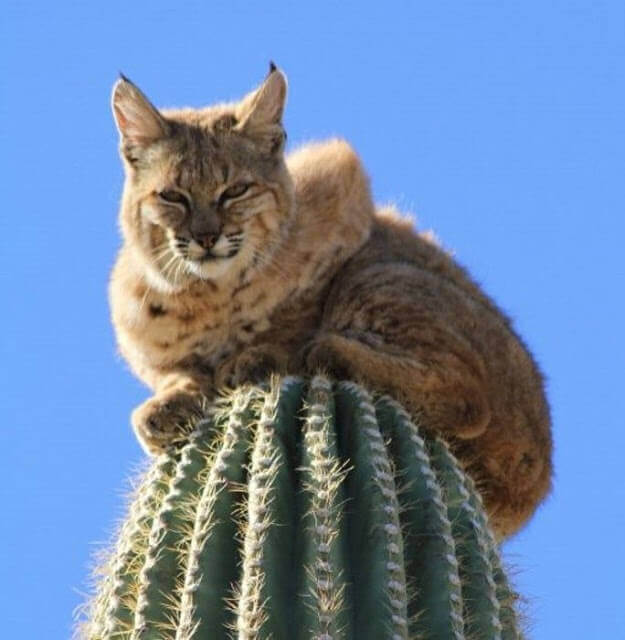 “Although it may be common for a bobcat to escape one of its major predators, it is very uncommon to have witnessed such an event first hand. I personally examined the base of the giant cactus after the bobcat had left. ‘There was no hair or blood – only claw marks.” 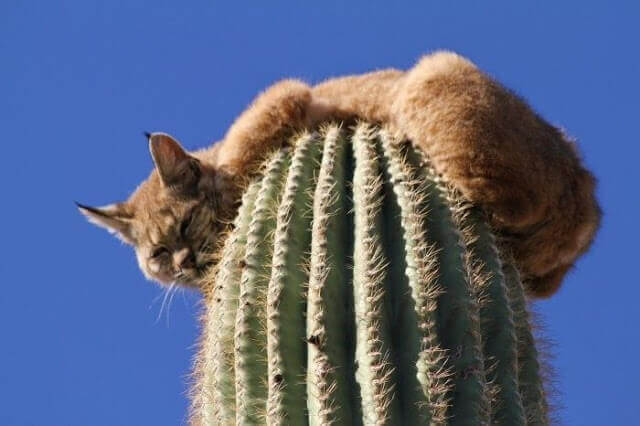 What do you think about this cat? Let us know in the comment below and share this article with your family members and friends! Who knows someday your cat will be the one who breaks the record?

Check out the video to see this brilliant bobcat’s drama unfolded: