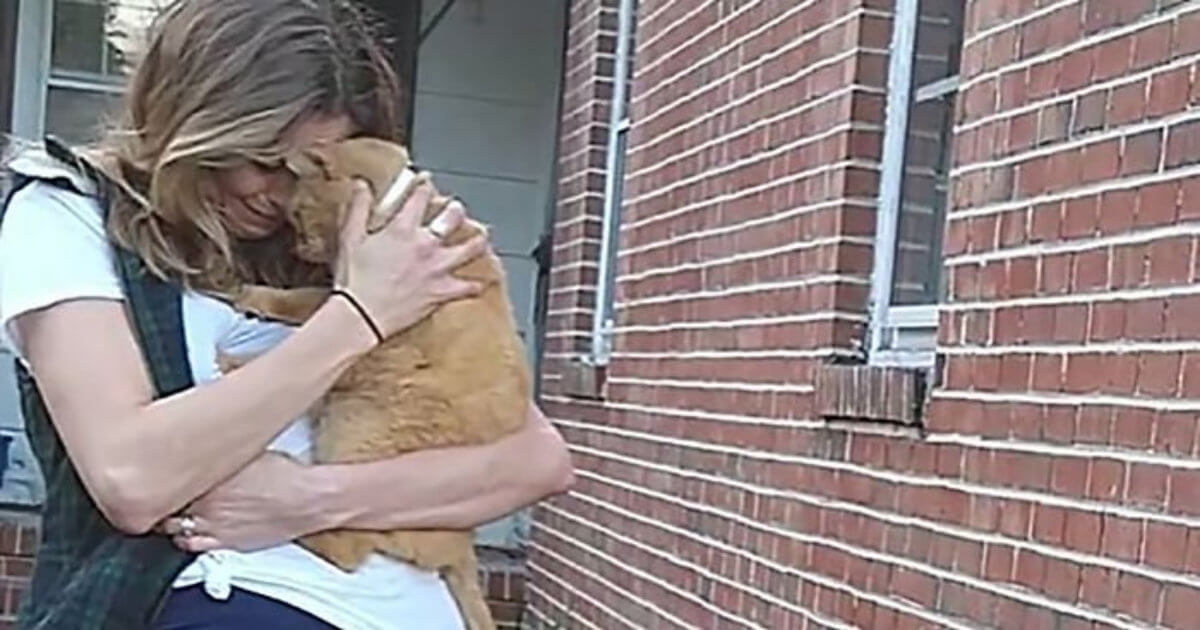 Cats are known as independent ones and they love to wander around the outside. However, some cases have been gone too far from the limit which leads to several heartbreaking moments. And that happened with a family in Virginia when their kitty named Cat was missing for more than a year. Living with a broken heart and hopelessness, they thought they would lose him forever but on a fateful Halloween night, they received a voicemail from the shelter and the reunion was overwhelmingly emotional.

This cat named Cat was missing for 536 days

Meet Mindy and Luke Criner, who are Cat’s owners. They adopted this orange fluffball from the Peninsula Regional Animal Shelter in June of 2015. Cat was considered a shy boy, he didn’t get along well with other cats. At that moment when “he had that look in his eyes like the kitty from Shrek while he watched the other kittens play longingly, and I knew at that moment he was meant for our family. You could see in his eyes he just needed love.” They also microchipped in Cat’s collar in case some unexpecting things happen people could contact Mindy and Luke.

Cat is sweet and gentle with both, he likes to lay on the owners’ chests and purrs out loud which is signifies that Cat loves the family. After a while, Cat gets his own confidence and he is able to roam around the neighborhood but that’s also the tragedy that starts to haunt the small family.

“He went missing in the beginning of May, he would go out for a little while during the day if it was nice and come home when called for lunch or dinner, and sound off with a loud meow to let you know he was coming. I put this new collar on him that had just come in the mail and let him out to play in the tree out front like usual and he paused and looked at me and I just had this strange feeling I wasn’t going to see him again, to the point I actually called my husband and told him about it. We assumed it would be a normal day, but we weren’t that lucky. He didn’t come home for dinner, didn’t sound off when called. By morning I was in full panic mode.” – Mindy recalled.

His owners were worried sick and were starting to lose hope

They were high on hope at first because they thought he would have been around the place where they were living. Leaving Cat’s litter box outside, printing out the posters, setting up some small housing stations nearby, and getting help from Lost & Found Pets – Hampton Roads, VA, Facebook page. But they were not lucky enough to hear any news from Cat. Their hopes started to incline.

“We took all the recommended tips she provides on the page, set of this litter box and food station so he could smell his way home, and set up small housing stations a few blocks and about a mile from home with his pet house, food, and something that smelled like us (neighbors were fantastic and even checked in for us so we wouldn’t have to travel with the baby so much). We put posters at the local grocery store, vets offices, shelters, and in the neighborhood. No Cat to be found. After a few months of nightly walks calling and praying animal control or the shelter would call, I started to lose hope.”

When one day they got a voicemail from animal control

Days turned to weeks, weeks turned to a year, Cat was not found no matter how hard they tried. They were heartbroken and worried about if their little friend was doing well, or could be worse. Everything gets paid off when you least expect it. They received a voicemail message from Animal Control (AC) and a microchip company who sent them an announcement that Cat was found.

“He was microchipped and had a collar with the vet’s info and my name, I knew that if someone found him or even the worse-he had been hit by a car-i would get a call because he would get scanned.” – Mindy said.

“On Halloween, 536 days after he disappeared, I got a voicemail from Animal Control and an email from the microchip company saying he had been found!” – She continued.

Turned out Cat was adopted by a senior man and he had been feeding Cat for a year but the man said that Cat was hit by a car. The old man reached out to AC and he wanted to let Cat the orange kitty go.

“The wonderful woman at the desk got right on the phone and called AC and everyone she could think of and found out that a man had called AC after Cat had been hit by a car Halloween night. When AC showed up the gentleman in his 60s said that he had been feeding what he thought was a female cat for at least a YEAR when Cat was hit, in lieu of taking him to a vet he called AC and reported the “stray” he’d been feeding for a year was hit and needed to go. AC immediately scanned him and my information popped right up. The gentleman didn’t even know microchips existed. He kept Cat at his house until I could be contacted. I called right away and picked him up that afternoon.” – said Mindy.

Turns out, a man was taking care of Cat for a whole year

After 536 days missing Cat, Mindy burst into tears but she knew that she should control her emotions to let Cat re-acquaint with her.

“The reunion was unreal. He was only 1.8 miles away, 2 blocks from the park we take his tiny human to 3-4 times a week. He was sitting on the porch eating out of his bowl when he looked over at me and I said his name and gave him my signature kitty kitty type call. He meowed right back to me, as he always had, grabbed another bite of food from the bowl, and walked right over to me as I approached. I sat on the steps and let him come to me in case he was scared, and he got right in my lap and purred.”

Cat got attached to her husband Luke first, so when Mindy picked Cat up and walk to the car where Cat’s human dad was waiting for his missing child, Cat expressed a joy of being back home with his louder purrs.

” I started walking towards the car where cat heard my husband (who has an incredibly distinctive voice), Luke, was talking to the guy that had been feeding him, and Cat knew we were going home and purred louder than I knew possible and gave me that first suuuuper long head boop. It was like that head boop nudged that little piece of my broken heart back in place. My husband caught the perfect picture of the exact moment he knew he was going home with his family.”

When Mindy drove to the man’s house, she was met by Cat who instantly started purring after seeing her

The happy reunion makes us think more about keeping track of your domestic cat with the microchipped collar and give pet owners who currently are missing their furry friends a high hope.

“I hope that our story will give others missing their pets hope, and maybe those who have unknowingly taken in someone else’s pet will check to see if they’re scanned so that pet can have their happy reunion with their family, and someone else can feel the overwhelming joy we’re experiencing.” – she concluded.

Here’s what people online had to say