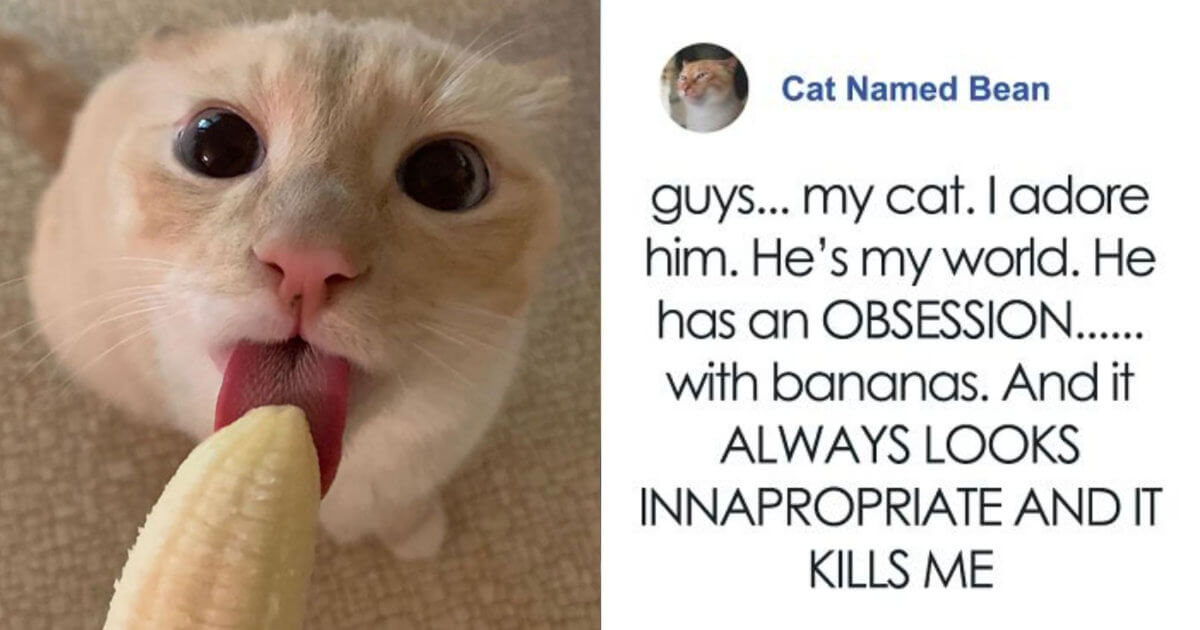 Beanana – that’s definitely the perfect name for this banana addict! Who would have thought a cat would like fruit anyway since cats are known as not a real vegetarians. So beside the scientist’s facts, cats always surprise us in the most unexpected way, Bean’s owner is in the same situation. She could not stay still and enjoy looking at his son satisfyingly licking the banana so she ended up with taking these kind of inappropriate pictures (you know what I’m trying to mention) and sharing to the world! Let’s find out how this obsession kicked in with Bean the cat!

Meet Bean the cat. He really likes licking bananas for some reason

Bean was a teeny tiny kitten and was abandoned by his mother, “On the evening of 6 April 2018, I saw a post about this teeny white kitten that needed help.” – the owner said.

“It was damp and getting dark and cold and they had been watching for momma for 3+ hours with no sign and he was in the middle of their yard alone. I picked him up within a few minutes as they lived nearby.”

“He was my first bottle baby (I have fostered and rescued cats and kittens for years).”

Being lovingly raised by his human mom, Bean now is a good boy with banana friend who is living with his other siblings Pirate, Ninja, and Raptor.

Beanana’s mom shared a bit about his brothers:

“Pirate is the oldest. We rescued him in Germany. He was super sickly and stunted. He has a badly infected eye that turned out to be cancer. Thus his name. He will be 10 this summer but is a healthy guy ever since his eye removal. Ninja is the second oldest. Also adopted in Germany. He was born as a feral kitten but we got him at around 5 weeks of age. He’s 1 year younger than Pirate and just turned 8 this last fall.”

“And lastly, there’s Raptor. He was adopted here in Utah and is 3 years old. He was adopted through one of our local shelters when he was just a baby. We met in the adoption center for Petsmart,” the owner said, noting that he wanted to be with her so bad that he turned his back to other people looking at kittens. “He chose me. Everyone always giggles at his ‘lips.’”

Back to Bean, being asked about if he liked something else except banana, she said his other favorite snack is Noosa Yogurt (“in small amounts also, of course”) and he also adores scrambled eggs and cheese.

“He’s also a veggie lover and will go for Brussels sprouts leaves and lettuce. He’s a well-rounded boy. His actual diet is wet food twice a day, though.” – the banana cat’s loving owner continued.

The cat lady also exposed her life with a little family. When her husband and her kids were away, cats were all she got during the day, so she started to upload some funny photos of Bean adoring his yummy banana.

“My husband was deployed and my kids were school age so he has my sole focus every day and I was up every 3 hours with him every night. I’d originally intended on finding him a home, but as he grew and my husband returned from deployment when he was just 4 weeks old, we purchased a home and I couldn’t part with him.”

“I love photographing him and he has such a big personality I figured other people would enjoy him with me.”

Bean’s adorable photos are going viral and some of highlighted responses appeared, said their pet was also in love with a particular thing just like how Bean loved bananas. Aren’t cats cool?

“He just kinda wanted a sniff of a banana when he was about 9 months old or so and ended up really liking them. He never gets much of one and it’s maybe a couple of times a month or even less.”- This cat mommy knows what is good for her boy.

As everyone was concerned about his health since cats are in really need of high protein instead of vegetables and fruit, she reassured the Internet:

“His vet knows about it because we’ve seen her several times this last year or so for his bouts of uveitis that he’s had a small problem with but he’s doing great and it is unrelated. She got quite a kick out of his photos. Banana would be unhealthy for a cat if consumed regularly though. So it’s definitely not a diet staple for him.”

Bean is just the cutest!

Some people also shared pictures of their banana-loving pets 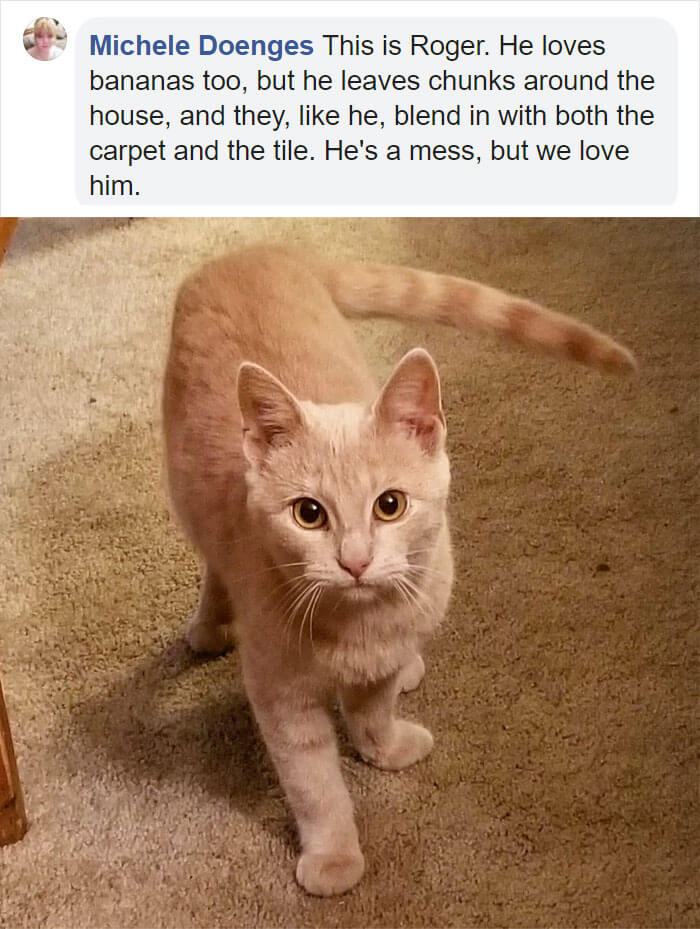 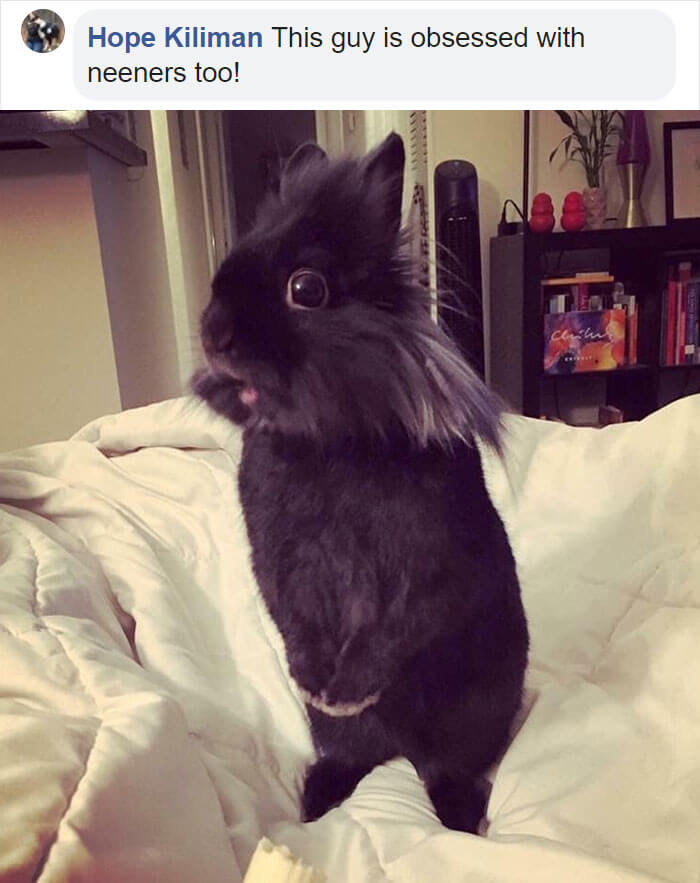 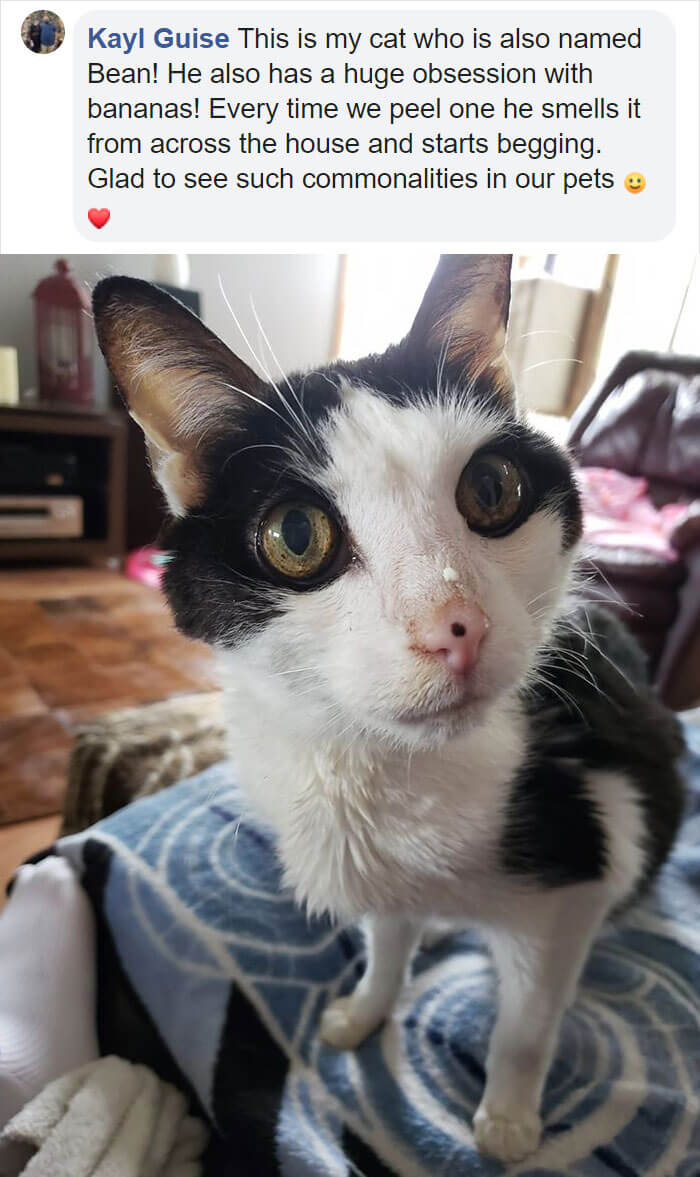 The internet fell in love with Bean the cat!