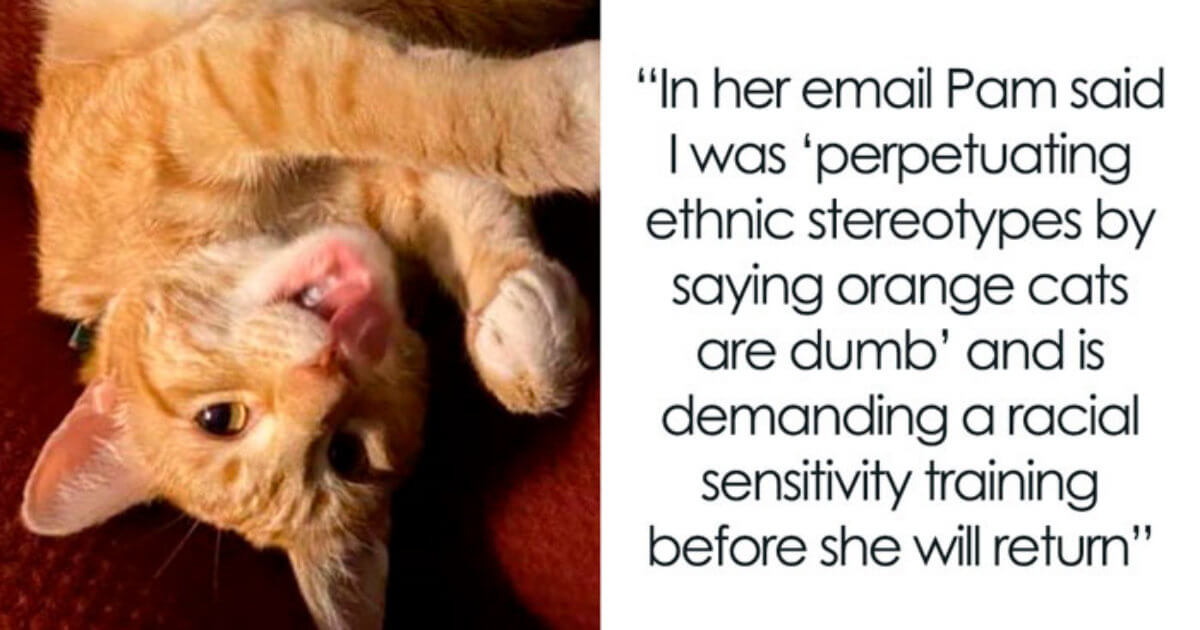 Do you remember the office cat duo Credit and Debit the office cat duo Credit and Debit who went viral because their cuteness could demolish stress and boost employee morale? We all admit that having office kitties doesn’t make us distract at all, since they are the spirit of productivity. But on the flip side of the story, they are the victims of intricate situations that people don’t know whether to laugh or cry.

Meet Jorts and Jean (respectively), two office cats that have been going viral recently because of an argument

One Reddit user asked the AITA community a burning question if he committed “perpetuating ethnic stereotypes” in his workplace. An ‘Am I The A-Hole?’ post has raised that question to scratch people’s heads. All of a sudden, two adorable cats are more popular than they have ever been.

u/throwawayorangecat is a guy who adopts two lovely cats, and he lets them play in his worksite. Jorts the orange kitty is a newcomer in the office, who is considered “kind of a simple guy”. Jorts has recently smitten everybody in the office because of his plain nature. Meanwhile, Jean is a tortoishelle cat who has been adopted for years. People are in love with her wild, sassy, and clever personality. OP started to share the story and question everybody in the AITA community about his official ‘crime’ of discriminating against his cat, Jorts.

“Jean was a feral rescue from a rescue agency. Jorts just showed up one day behind the dumpster, Jean would sit and watch him through the window when we offered him food.” – OP shares the histories of the cats.

“They got along like they were old friends, as soon as they were carefully introduced after he was cleared by the vet.” – He continues. 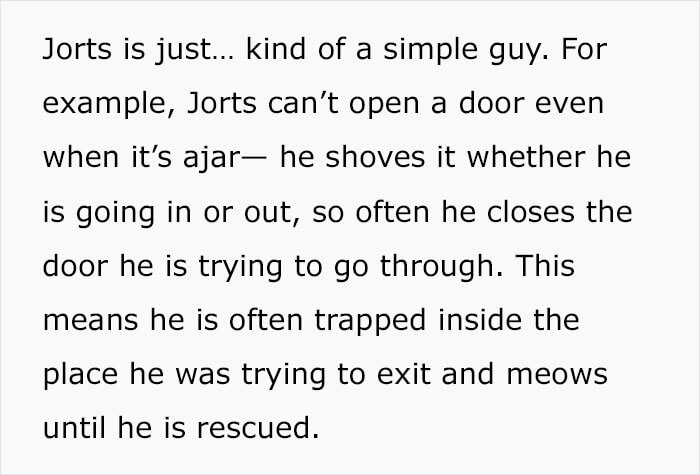 At first, he declared that having office cats added value to where he is working at. In fact, people love the presence of the kitties who bring joy and laughter to the room. However, OP pointed out Jorts’s drawback. The cat struggled with getting out of where he was trapped inside, and he kept meowing until someone came to help him. The employees are no stranger to his daily predicaments, they do not mind helping him out as if that was their chore in the office.

“Jorts can’t open the door even when it’s ajar – he shoves it whether he is going or out, so often he closes the door he is trying to go through.” – OP wrote in the post. 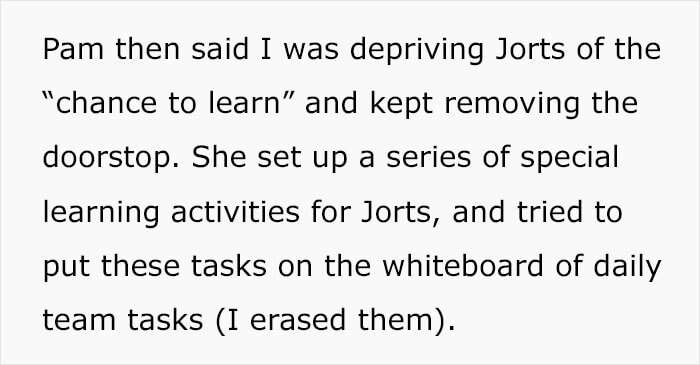 Knowing that her new friend was always stuck in the doors, Jean the tortie kitty was willing to resolve. OP decided to install a doorstop so that the cats could feel free to play. But OP’s intention was somewhat distorted by one of his colleagues – Pam. When it came to the doorstop, the woman kept taking it off because she thought OP deprived Jorts’s right to learn and grow daily versus Jean’s. Pam wanted to be an unofficial coach for the cat who liked to get into trouble. Everything seemed kind of extra when she started “setting up a series of special learning activities for Jorts” on the whiteboard instead of tasks for the team throughout the week. 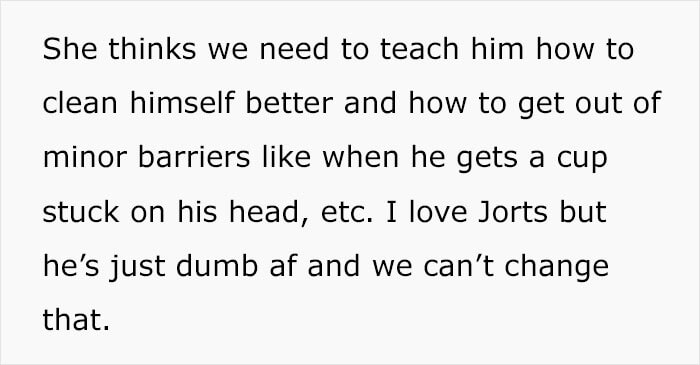 OP found it interesting and adorable when his co-worker Pam poured her heart to teach and train Jorts, but it didn’t help much according to Jorts’s innate problem-solving pattern. The man reconfirmed that there was nothing to do with Pam. It was just because they couldn’t change what Jorts the ginger cat was born with. He, eventually, switched his plan to install a cutout door exclusively for cats, where both of them would never have to be locked inside the closet. 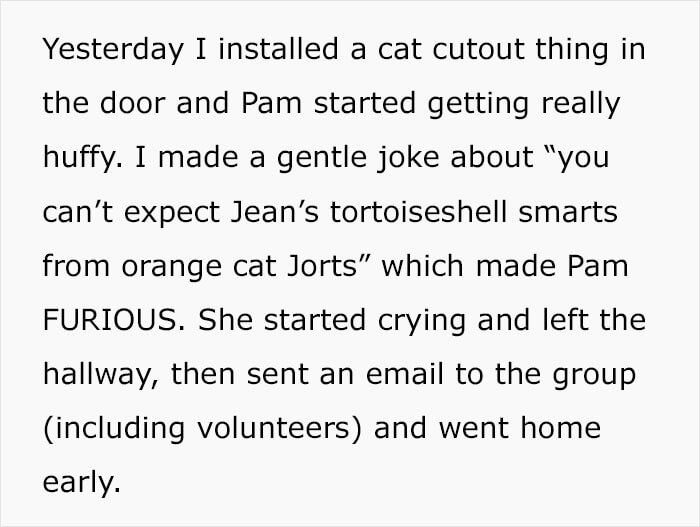 Turned out, it made Pam quite mad when it seemed very easy for Jorts to reach her expectation. It was not until OP spilled out a provocative joke about Jorts’s questionable intellect, which maximized Pam’s rage: “You can’t expect Jean’s tortoiseshell smarts from orange cat Jorts.”

The woman was rampant enough to burst into tears and leave her work. Pam also sent an email to all the workers as well as volunteers with the content of demanding an apology for Jorts because he was “perpetuating ethnic stereotypes by saying the orange cats are dumb”. OP’s co-worker left a door open for him to enroll in racial sensitivity courses before she came back to work, too. The drama became unnecessarily debatable on the subreddit.

Following the success of the original post, OP also provided an update post, explaining how HR got involved and other spectacular details

There were so many serious and hilarious comments about this uncanny situation. Some people thought OP was completely acquitted of treating cats and teasing around Pam. He sincerely didn’t have any bad intentions in actions, thoughts, or words. And they thought Pam was a bit of being too much on her forced training. On the contrary, people jokingly suggested creating a platform for learning about racial sensitivity training, but for cat breeds only. 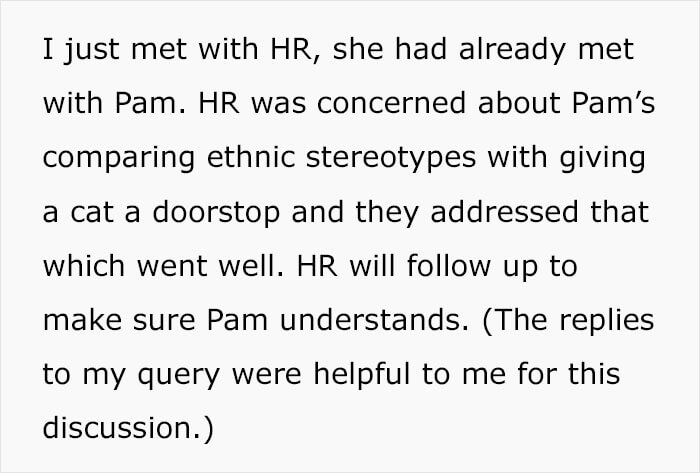 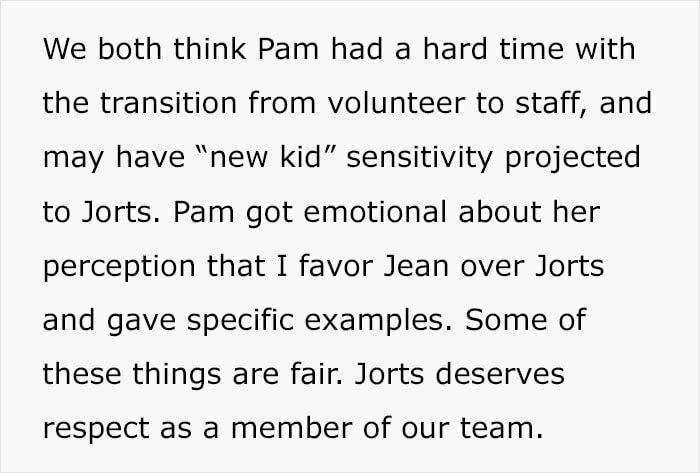 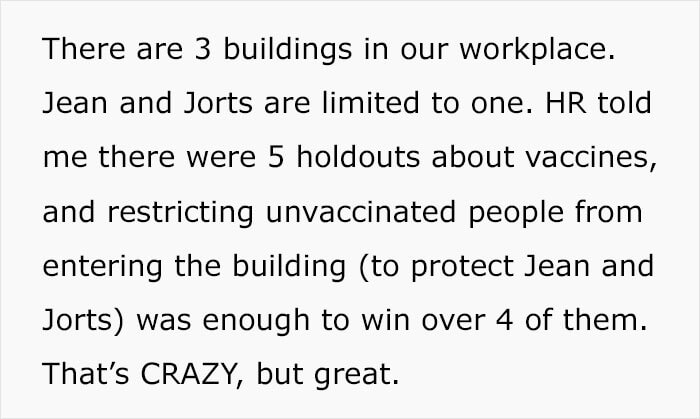 The AITA community had been adding a lot of advice for a while. It both made the poor guy annoyed and comforted at the same time. He was surprised at how the engagement of the audience was that high.

“The AITA replies did help. Never in a million years did I think any random weird post would connect so hard.” – Elaborated OP.

“I guess as a society we are all just doing our best right now and a story with no [email protected]#holes is actually just what we need.” – He continued. 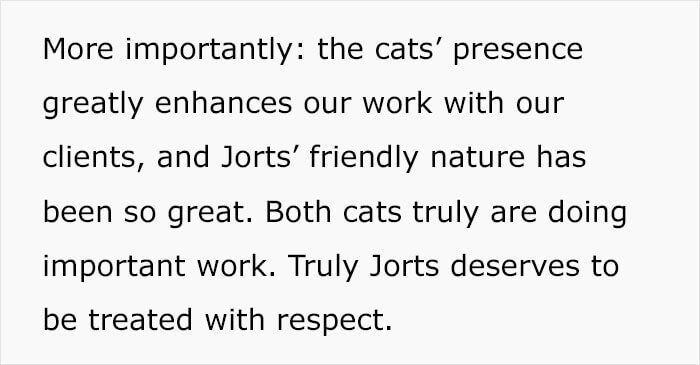 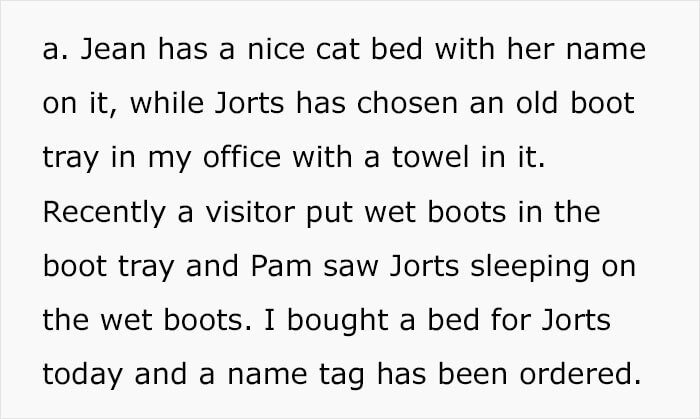 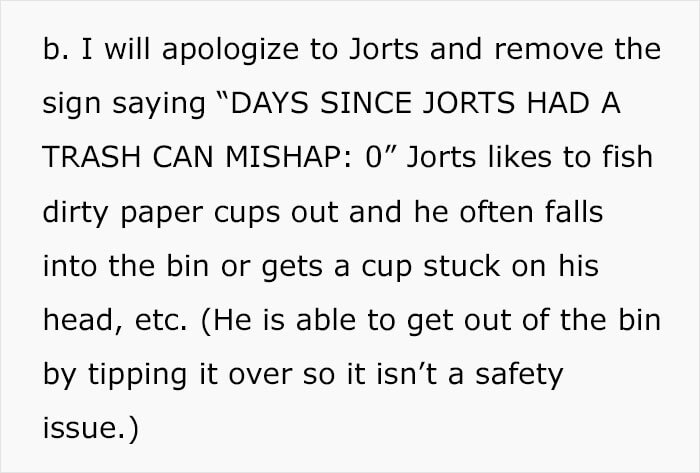 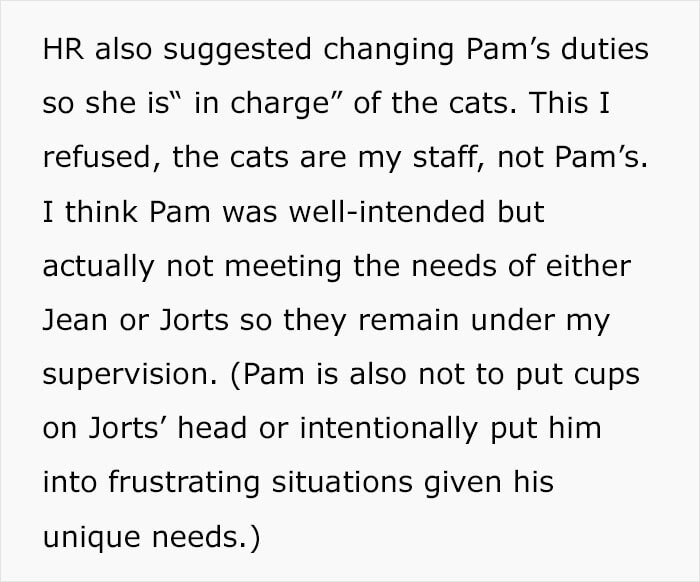 The whole story was delivered to the HR department, which led OP to face the final solutions. There were three out of four ideas that the man had agreed with. He admitted that consulting a co-worker was not the best way to happen in the office area. He also apologized to Jorts the cat whom he said was dumb. The best part of this long story maybe was Pam finally confessed that she used margarine and spread it to Jorts’s fur so that he could learn to groom himself better.

“This may explain the diarrhea problem Jean developed (which required a vet visit).” – The man wrote. 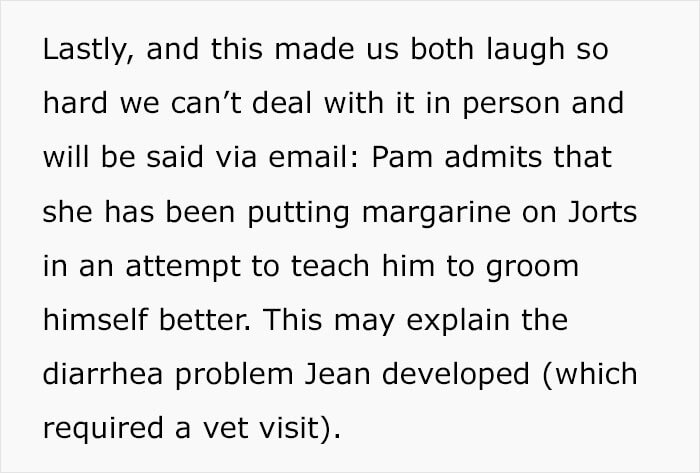 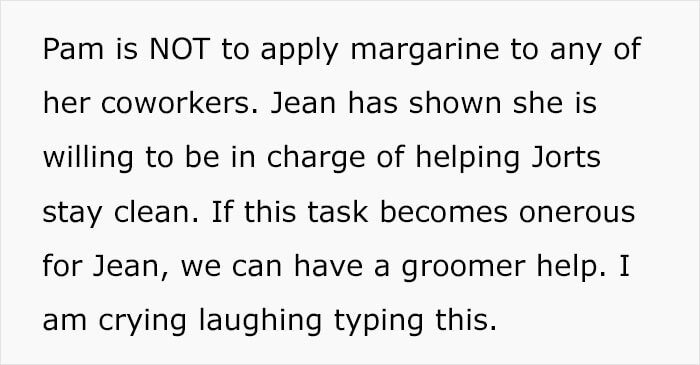