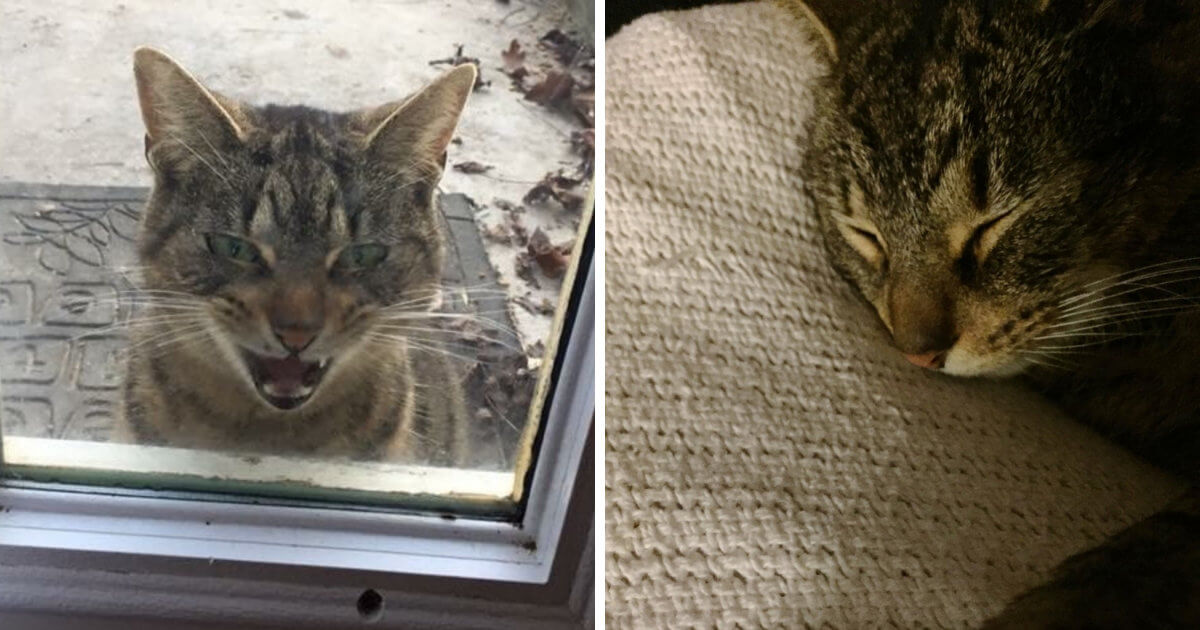 If one day you wake up and see a cat who is sitting by the window, keeping meowing until you open the door, what would you do? The exact dilemma happened to an Imgur user FreckledFaceGinger that she thought she would never forget in her entire life.

“I think we’ve been adopted.” – The user wrote on Imgur.

There was a tabby cat who suddenly appeared at the family’s front door. The cat kept being chatty as if she wanted to invade in. Unfortunately, the family already had two indoor cats, so they trapped the kitty and transferred her to the rescue organization. Little did they know, the cat was predestined to be the 3rd mempurr of the kitty gang.

“As I was taking the trap out of my vehicle, she escaped and made a run for it. 3 days later, I wake up one morning and see her sitting at the back door. It’s approximately 3 miles back to my house.” – FreckledFaceGinger said.

Was it that God’s plan when they were all three? The cat must have been very determined and persistent to be adopted, it was said that the cat didn’t stop meowing until the family opened the door for her.

“Her name is Michelob because that is what I was drinking the night she showed up.” – The user wrote.

Michelob was officially a domestic cat since then. The family took her to the vet for a checkup whether she got vaccinated or had any health issues. Turns out, the cat was already spayed, only the missing microchip was what they were quite concerned about.

“They clipped her ear in case she ran off they would know she has been spayed.”

By the time the desire and perseverance of the cat were paid off, the family was head over heels with Michelob.

After living in the family, the owners assumed Michelob didn’t have loving former parents. She tended to be slower to get along with other family members and their two cats.

“She seems to have been mistreated before she found us, she doesn’t play (even with a laser) she barely meows, doesn’t like fast movement or the other cats.” – They confided.

Regardless of her minor drawback, Michelob the kitty was still a sweet-loving and loyal one. She loved sleeping on the laundry basket which could cover her with warmth all day long. She also appreciated brushing time with their humans.

“She chose to stay here for whatever reason… she seems happy.” – The owner wrote.