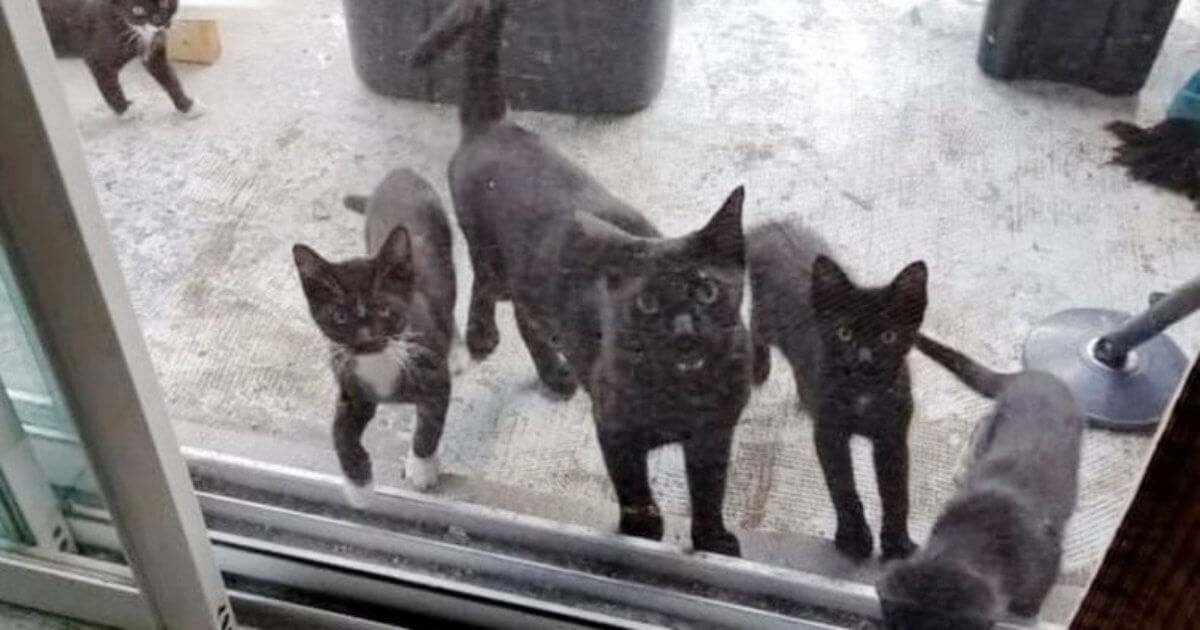 A cat-loving couple in Montreal, Canada, has been helping to look after the area’s underprivileged, homeless cats.

Kurt and Melanie have been doing everything they can to help the needy cats, despite the fact that they are unable to adopt any more cats (they already have their hands full with the ones they have in the house).

The pair has been feeding stray and wild cats and even setting up cat shelters in their backyard and they received proof of how much their dedication matters to the animals they have assisted.

A shy, black stray entered the house, had a bite of food, and then went.

She reappeared a little while later, accompanied by her four kittens.

The caring mother of four hoped that whoever had assisted her in obtaining food would also assist her kittens.

Kurtis and Melanie were obviously delighted to assist.

The kittens were cute and full of energy. As they investigated their new house, they played, explored, and followed their mother around.

They looked thrilled with the food, shelter, and affection they were suddenly receiving, and the cat mother seemed pleased with her decision to place the kittens in Kurtis and Melanie’s care. As you may know, cats need a certain period of time to get used to a new environment.

While Kurtis and Melanie looked for suitable owners for the adorable foursome, they took wonderful care of them.

They took their time socializing the kittens, and two of them eventually found their forever home.

In honor of their rescuers, the remaining two kittens have been given the names Kurt and Mel. They are a bonded pair that must share their eventual forever home because they are unable to be parted.

“They are the sweetest, cuddliest kittens you will ever meet. It would be ideal if they could be adopted together…because they are so close,” Kurtis said in an interview.

While Kurtis and Melanie continue their search for a family for the two kittens, they have received assistance from the Chatons Orphelins Montréal rescue group.

Kurtis and Melanie are currently attempting to catch their mother so that she can get spayed, as the kittens have just had their first clinic appointment.

Kurtis and Melanie are also doing their wonderful job with the neighborhood kitties.

The last two kittens will soon find their new home, where they will be warm and safe for the rest of their lives, thanks to Kurtis, Melanie, and their brave, loving mother who wanted to offer them a better life.