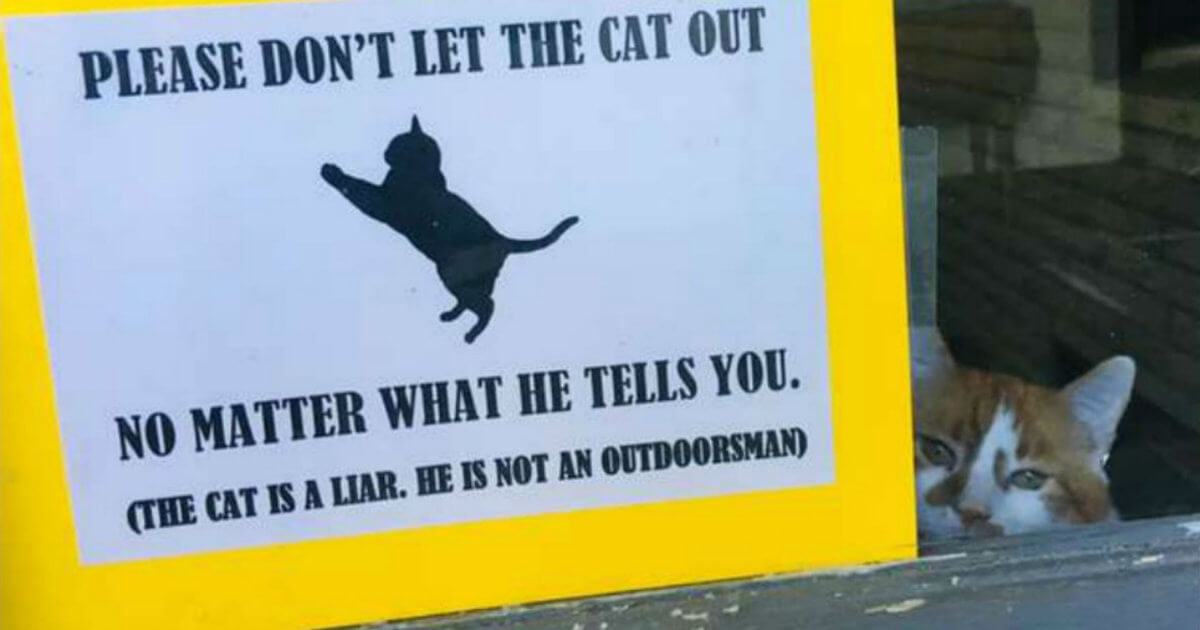 Have you ever seen Rapunzel in a 31-pound cat form? It was not until when Reamer’s family adopted this lovable cat that he became an outdoor aholic. The cat started kicking off his tactics, asking people to let him out. And guess what, the family put up a sign to stop the feline conspiracy and begged people not to be fooled by his adorable appearance. Would our Rapurrzel accomplish his wild will?

In 2019, Laci Reamer and her family came to the shelter to find a cat who was mellow and home-loving. Hubert, an 8-year-old orange and white cat, captivated the family right away. Reamer knew Hubert was her rightful pet. The shelter reported that he had been an indoor cat with a friendly personality. As true as it was, the cat acclimated to the family real quick. He was well taken care of and well-fed, and something inside him started to bloom.

“He tries to escape on the daily.” – Reamer said.

“He succeeded one time in his escape. We didn’t know until he started walking up the sidewalk! How can you miss a 31-pound cat escaping through your legs at the door? Yes, you read that right! He’s 31 pounds. He’s chunky, but spunky (he is on a diet).” – She continued.

Uh oh, now you understand why I call him Rapunzel, don’t you? During a few months in Reamer’s family, Hubert felt like he needed to explore the world as much as he could. He was craving for someone to open the door, so he could sneak out. Reamer said it took her a while to figure out the secret that Hubert had been trying to hide when he was at the shelter. She noticed that whenever someone was near the door, Hubert the outdoorsy kitty would leap his chonky body to that person with begging eyes.

“He will truly give anyone that look with those big eyes like, ‘Please help me. I have things to see and do out there. If you just open that door, I’ll slide right by you.’” – Reamer said.

To prevent Hubert from begging and asking for being outdoor, the family decided to create a sign which was written: “Please don’t let the cat out. No matter what he tells you. (The cat is a liar. He is not an outdoorsman.)”

People who came across the sign laughed out loud because it was pricelessly hilarious. Reamer did not want her cat to be in danger because the family was living in a hustle and bustle city. Hubert’s curiosity and a human’s permission may lead everything to the worst.

“He’s very good at begging, so we wanted to make people aware. We live on a busy street and don’t want him to get hurt!” – The woman said.

However, Reamer didn’t want her cat to be at home all day, which contradicted his real desire. She bought a harness and leash so that Hubert could safely explore the outside.

“We just ordered him a harness and leash to start his grand outdoor adventures.” – Reamer said.

“Fingers crossed that will go well!” – She promised.

Hopefully, Hubert will live happily ever after with Reamer’s family, lots of treats, and affection!