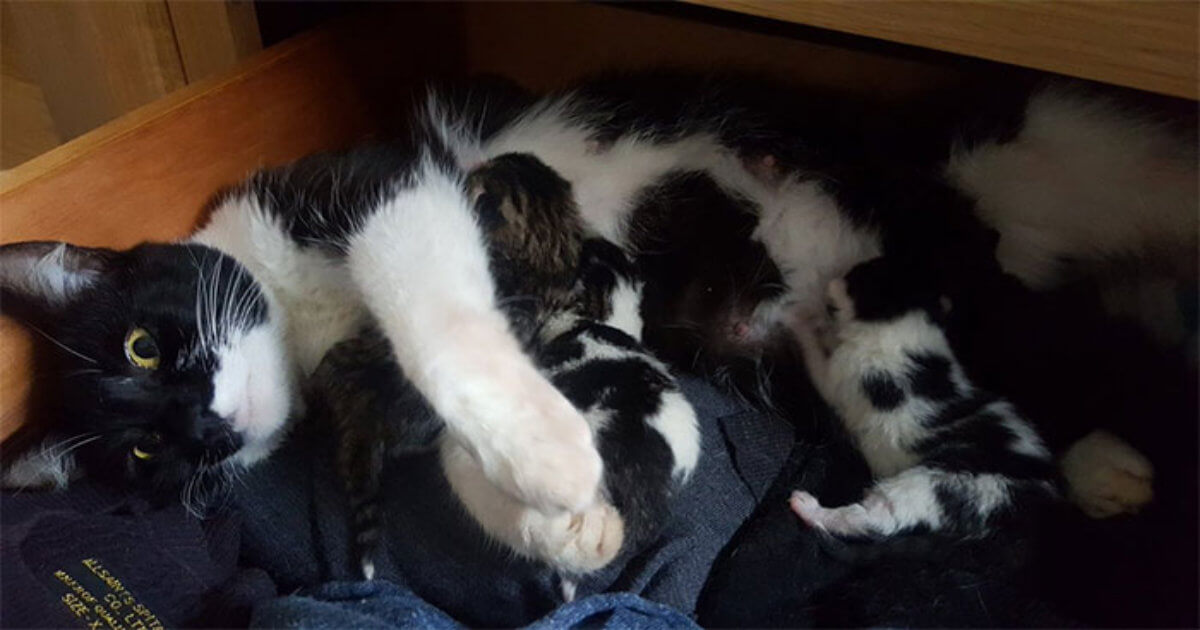 If you’re wondering if everything is actually impossible, let me introduce a creature that will always be full of surprise: cat. They will mysteriously appear in front of you in the most unexpected way. This shocking yet heartwarming story about Paris Zarcilla and the cats which has been widely retweeted will give you a particular idea about our adorable cats.

Someone was breaking and entering into this guy’s bedroom, but he caught them red-pawed

Everything started when a London-based filmmaker Zarcilla needed to grab a sweater so he went upstairs. London is known as having a tremendous amount of chilly weather. But it’s not just his sweater that Zarcilla has discovered. He found a black and white calico cat that was accompanied with four little kittens that were born very recently.

“So… I JUST FOUND A CAT THAT IS NOT MINE AND IT HAS HAD BABIES UNDER MY BED.”

That was the very first tweet to begin the journey to become a cat dad of Paris, he was in an awe with the situation.

Later in a thread he thought the cat was a neighbor’s. He wrote to a Twitter user asking where the cat came from and how it came into his room: “I keep a lot of backdoors open.” “Slept in my living room last night. Went upstairs to grab a jumper. Boom. Kittens. I am genuinely baffled.”

It’s not surprising that cats choose the space under the bed to give birth to a baby. As Purina UK mentioned, cat mommy-to-be is often likely to “sneak out to have a baby alone”. A dark, warm and quiet space is the most ideal choice so Zarcilla’s bed underneath was fit in. In fact, if the back door of Zarcilla was frequently opened, the cat was clever enough to wander around, mark the scent under the bed and at what pointe she noticed that the space under the bed was a potentially great birthplace, and later returned to give birth to these tiny furballs.

Anyways, Zarcilla also said he planned to scan the mother cat to see if she was belonged to another owner but on the other hand he was like: “So ready to be a dad right now.”

Furthermore, he didn’t stop at being curious and in shock, now he felt like a real dad who took care of the cats’ cuteness moved him to be a better man after all. Studies show that pets are really good for our health who can help reduce our anxiety, stress, and allow us to adjust the temper. These following tweets showed how proud he was to be a permanent cat dad, he sacrificed his favs to devote to those cuties. Now he is living happily with the cats ever after!

Let’s share his euphoria to the world and give us some thoughts about this cat dad, do you think he would make a movie about his personal story?