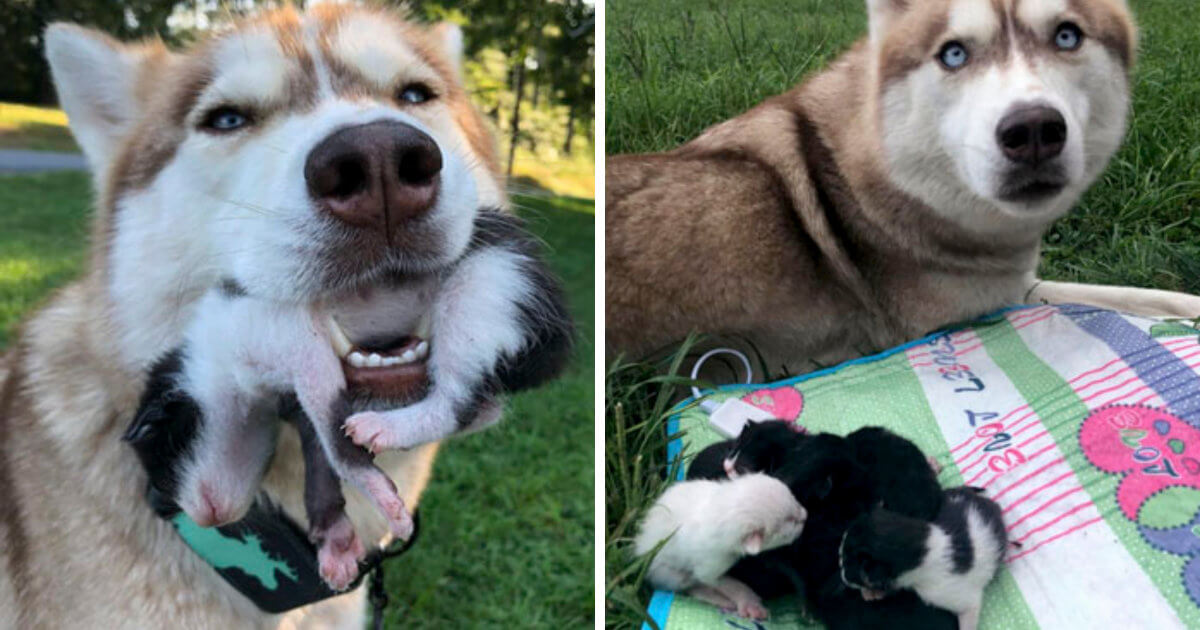 Dogs are always known as the great companions who have a heroic act, willing to help people with their incredible senses, that is the reason why people prefer to train our four-legged friends to be the service dogs. One of the heartwarming stories is about Banner the husky rescued a litter of kittens has touched people’s heart and also raised the awareness of getting rid of the cruel actions: abandon the animals.

Banner is a 3-year-old Husky who always by her owner Whitney Braley side for helping her from the disability. Both of them love to save other poor animals from the dire circumstances. Whitney adopted Banner when she was a pup and now she is the treasure with a gold heart that Whitney has ever had.

With a husky’s instinct, Banner is excellent at scenting. One day, she kept urging Whitney to follow her to the forest with a distressful expression. Whitney knew that something was wrong, so she decided to discover with Banner.

“We do a lot of rescue, and she’s always attached to kittens. Two years ago I had my first bottle baby kitten that was found in a ditch, and Banner raised her. That particular cat still lives with us but she’s fostered at least ten different liters of kittens over the years. This is the first time SHE found something like this.”

Turned out, a tight lid cardboard box of 7 newborn kittens who were nearly at the end of lives with the cold was in front of Whitney. Banner started to pluck one by one out, no one meowed.

“Someone must have just put them into a cardboard box, closed the lid tight and left them there to die.” –  Whitney said.

“They probably thought that no one would ever discover them. I don’t even know how Banner knew they were in there.”

Whitney said Banner didn’t want to leave these newborn kittens alone after bringing them to her home in Menlo, Georgia, USA. The dog was also cuddling, hugging, and taking a nap with the seven kittens as they were here own babies.

“I got her spayed around 1.5 years old, but she’s very maternal.” – Whitney shared.

Whitney also mentioned about finding homes for the kittens, give them a chance to live the fullest with their kind human parents. “Now I will find the kittens appropriate homes, that will love them forever. Our local shelter kills in three days, so it’s best if I do it myself. That’s the reason I always end up fostering babies. I don’t want them to die.”

Banner should be rewarded because of her brilliant and touching stories with 7 kittens. What a true hero!

“I’m so happy that now because of Banner, these kittens will go on to live their lives with loving families. It warms my heart.”