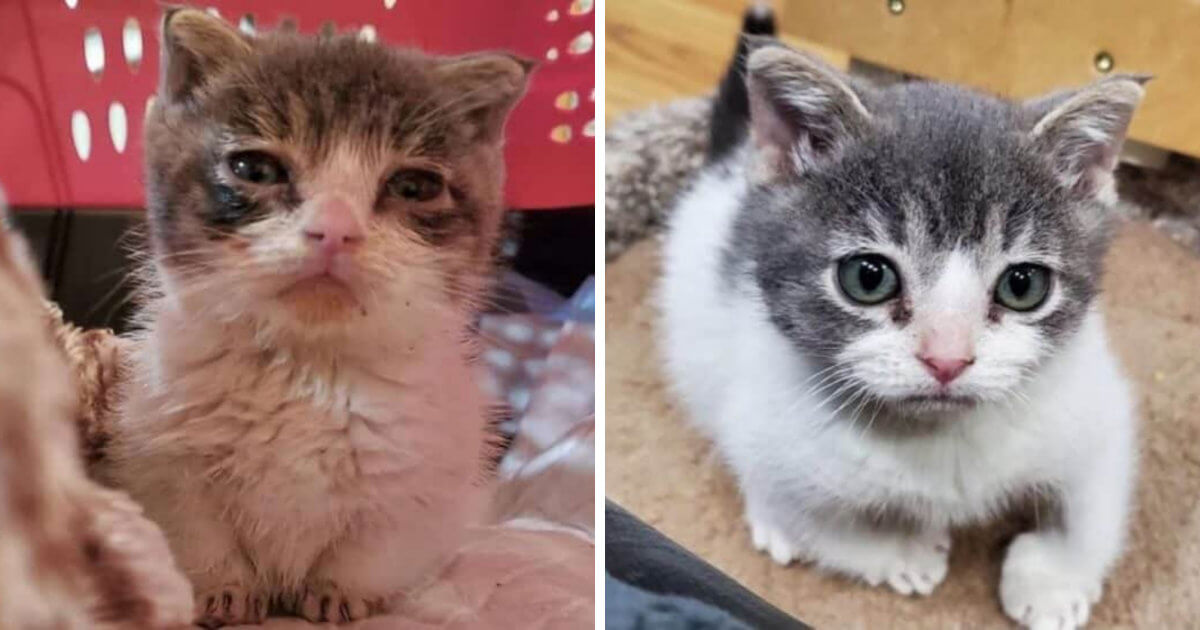 The kitten you see in the photos below has had a difficult existence. He was born with a rare and fatal disease, thus he had a low chance of surviving. The kitten was rescued by volunteers from the Alley Cat Project and taken to the Seattle Area Feline Rescue for treatment. He was thought to be 6 months old, yet he was quite small for a cat of his size.

His ears were folded, his wrists were bent, and his legs were too short. No one expected the small kitten to live more than a few weeks or months. He did, however, manage to prosper with the support of his team.

Gaby Campoy of the Seattle Area Feline Rescue has worked with a variety of difficult foster cats. Many died or became feral as a result of their ordeal. However, it was love at first sight the instant she saw this pitiful kitten. Gaby decided to do everything she could to help him survive the moment she saw him.

The kitten began to breathe more easily after a few days of oxygen therapy. He made an attempt to play and showed signs of progress. He began to gain weight and became quite playful, as a cat of his age should be. Gaby gave him the name Teapot and spent a lot of time cuddling with him. She believed it would be a good idea for the kitten to start socializing, so she matched him with Grandpa, a senior cat.

Scarecrow was Grandpa’s original name, but he didn’t scare this cat. In fact, they became fast friends and groomed him every day. Meanwhile, Teapot’s results were received. Congenital hypothyroidism, an extremely unusual disorder in cats, was discovered.

Under Grandpa’s cautious observation, he was promptly started on the right therapy. He never left Teapot’s side, and the kitten was overjoyed to have discovered such a companion.

Gaby decided to officially adopt Teapot after 6 weeks. He now has a comfortable home and spends every day playing with his favorite Grandpa.