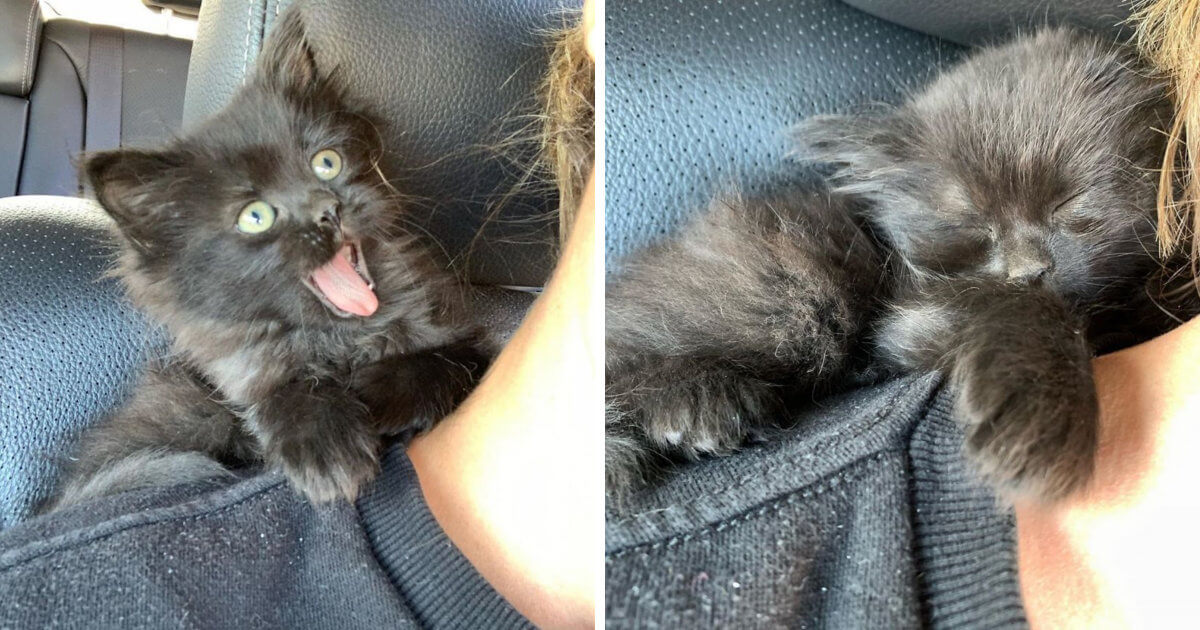 Being a rescuer is not as easy as you might think but this woman has been a hero mom for hundreds abandoned animals. One of them is a little black ball of fluff who was constantly roaming wild on the street and was spotted by a random man under his car. The black kitten was saved by Holly Brookehouser and get a better life after ever.

Brookehouser is known as a brilliant woman who has rescued and fostered lots of animals who are lack of the former owner’s love in Arkansas. When she was going shopping at the groceries she noticed a Facebook post about a teeny black kitten was in need of help. The man witnessed the cat and asked people online to give him a hand. Brookehouser had no choice but rescue this little baby because her words to live by is “fostering and helping pets on their journey to forever love is far too important to me, so I love and let go so that I can continue saving more.”

With a golden heart and loving motto, she brought the kitten home. The black floof was attached to Holly when they were on the way, the kitty curled up and slept through the drive home. Coincidently, it was also a two-year anniversary for her adopted son, Marcelo.

“I saw the post about the kitten and knew it could end up in the wrong hands, so I decided to jump back into fostering and on the day we were celebrating Marcelo’s second year home with us, I thought, no better way to commemorate the day than to save the life of this kitten.”

“Marcelo was so eager to hold her when we got in the car! I told him he got to name her and to think of a really good name for a girl kitty.” – Holly shared.

Appleseed – The loveliest name ever.

Appleseed was brought to the vet to have a full check-up before finding her new forever home. The kitten was a bit underweight, had fleas, and dehydrated. To make up what Appleseed had been through, the family fed her, bathed her, tried to help her gain a little bit more weigh. Marcelo loved the little fluffy kitten so “he’s helping me acclimate her to home life filled with good food and lots of love.”

At first, the kitten was too shy and nervous so Holly set up a comfy place for Appleseed near the dining room in order not to let her feel alone. Almost 4 days later, Appleseed was unrecognizable in the positive way! She was blooming with her sassy and adventurous personality, “she feels like the queen of her corner of the room.”

Although being tiny but Appleseed is a real majestic, she loves to play with others, loves to be smothered the fulfillment by her temporary mom Holly and her lovely human brother Marcelo.

“She likes following Marcelo around. We’re having to watch out right now because she is under our feet all the time.”

Holly had a pawsitive comment about Appleseed, hopefully someone would adopt this cute cat so she can continue her divine duty.

“Appleseed is highly adoptable and has lots of interest, including my sister. I do not intend to keep her. If I kept all my fosters I wouldn’t be able to save more. While she’s adorable, my job is to rescue, love, and let go.”