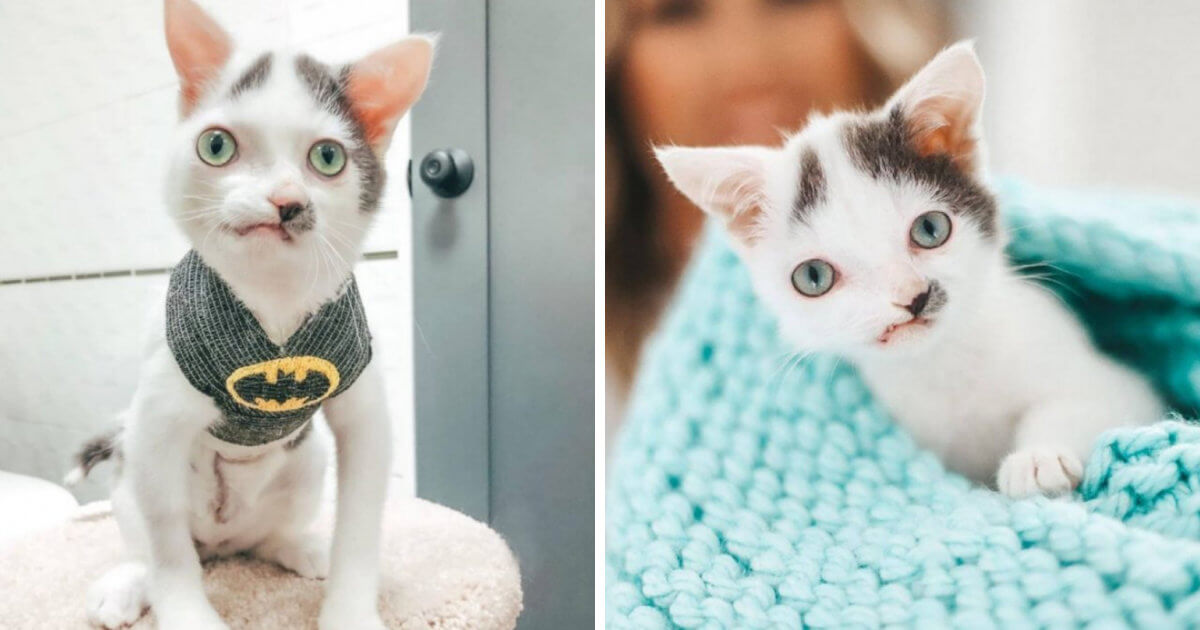 Hope is a word that everybody knows but can’t comprehend deeply. It is the exchange of giving and receiving an unseen thing, in a good way. Especially, when life strikes us down, we can barely stand firm on hope. If you are in the same situation, this powerful story will be for you.

A malnourished kitten who carries a lot of diseases is now a feline sensation with a unique lopsided grin. He is not only famous because of the peculiar look but also the strong will inside his little body that has touched so many hearts. Thanks to the kindness of Friends for Life Rescue Network (FFLRN), the crooked face kitty is now healthy and on the way to healing every hopeless soul!

Pinocchio the cat was found and rescued by Jacqueline Santiago, a founder of Friends for Life Rescue Network. She saw a picture of this little guy with an unusual look: the crossbite was misaligned, a deformed face, and a body was tinier than a pepper mill. The organization took him in, though, they were not sure what they would do with him.

“He came malnourished, dehydrated, and infested with fleas.” – Santiago shared.

Can you imagine how many conditions threatened this little ball of purr? Here is the list:

I don’t know about you but when I started to research each disease that was mentioned above, I was crying and wondering how the cat could survive steadfastly. Cats are experts at hiding pain, and we will only know when they show us some signs. However, with these distressful predicaments, Pinocchio didn’t feel like he would give up on this life.

During the dramatic period, Pinocchio was highly lovable and sociable. He was not aware of how different he was compared to other cats. He loved to be around the staff and his pet friends. Santiago was so proud of the kitty.

“He’s extremely confident and greets everyone almost immediately.” – She said.

“He runs up to anyone who enters the room and climbs up to their shoulder to perch. He rubs on you, loves to play, and bounces around. He’s a really happy guy who loves everyone — other people, other cats, and dogs.” – She added.

While he was in the foster home for medical surgeries, Santiago said she would not accept any application for Pinocchio’s adoption until his adulthood. The staff was uncertain about his further changes.

“We know what his needs are now, but as he grows and changes, those could change as well.” – Santiago said.

Mel Lamprey, an experienced foster mom for more than 3 years, was ready to take care of Pinocchio. She understood the poor kitty has to undergo a lot of surgeries and rehabilitation, so she volunteered to take Pinocchio under her wing. She is no stranger to those complex medications since she has fostered an enormous amount of injured animals.

Pinocchio was rescued in the pandemic, so it was more difficult for Mel and FFLRN to accomplish their mission of improving the cat’s health. But that doesn’t mean they put his life to an end. The team was so consistent and brave to have so many medical needs slowly for the cat to get through the tough time. And once Pinocchio’s recovery was finished, he would leave the foster home to enjoy his new cat parents.

“I can’t believe how much this strong boy has been through, and he still has his ‘I’m great, I can do anything attitude!’” – Said Mel.

Hopefully, this story will encourage you to be stronger and do not ever lose aspiration in any circumstances. Life is hard, but how we deal with this life matters. Pinocchio is not unlucky due to his sickness, but look at how he has strived for his sake! Check out Pinocchio’s social media and see his daily life in the foster home here. May you abide and keep hoping for whatever the future holds!