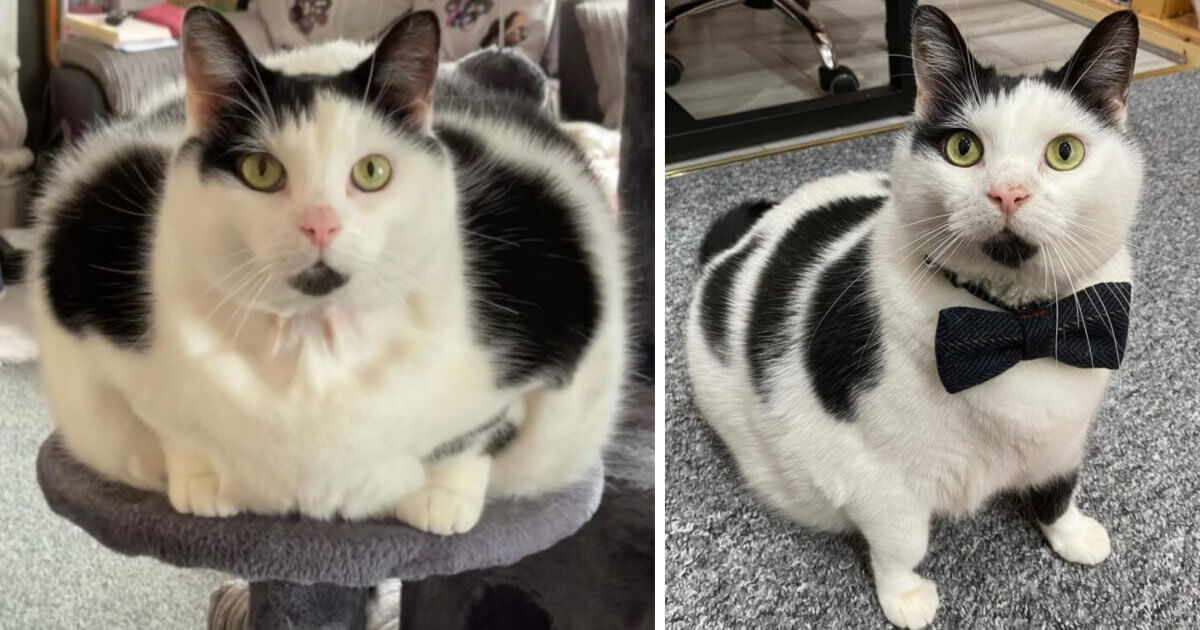 In most cases, weight is the most crucial thing that every cat owner should pay attention to. However, some cats are just being healthy and jolly without knowing their size can make their beloved humans worried sick.

In Bristol, England there is a black-and-white who is crafty and cheeky enough to devour every edible object around the house such a degree that his mom, Sara Matthews, had to put child locks on the fridge to keep him away from gaining weight. Spoiler alert, this dude has conquered over the locks!

Keith used to be an ownerless cat who had stomach problems and was undernourished. On Sara’s daughter’s tenth birthday, she wanted to do something meaningful that could help the daughter to overcome autism. Sara rescued the kitty with an open heart and…door, so our sneaky Keith started to investigate the fridge and cabinets in the house to find some snacks every night.

The family began to figure out their cat was a foodaholic, so Sara invested in some locks to prevent him from consuming food excessively.

“He would eat anything, even weird things like vegetables and pizza crusts by going through our bins and neighbors’ rubbish.” – Sara shared.

Little did she know, Keith was beyond cleverness and stubbornness. One time, Sara put a heavy bag in front of the cabinet so the wily kitty would not put his paws into it. Instead of using Keith’s lovely paws, he used his 24lbs body to move the bag successfully.

“He would clamber in when you opened the fridge and I was worried he’d get trapped in without us noticing.” – The woman said

“I’ve now had to put all of his rations in plastic tubs with click-down lids. We’ve tried puzzle feeders to slow him down but he’s just tipped them over.” – She continued.

For over the past 7 years, the 9-year-old cat Keith has built himself to be a chonky one, which raised the worriment to his human owner.

“He just carried on getting bigger though. We found out he’d been going through neighbors’ bins because he didn’t think he was getting fed enough at home. ” – Sara said.

“When he is on antibiotics it causes him further stomach problems so he has to have food with an appetite stimulant to make him want to eat, which exacerbates the weight issues.” – She added.

Turns out, during Keith’s poor childhood, he was served a special diet to help him battle gastro problems. As time went by, the feline’s appetite became voracious that led him to good weight gain and stealing other cats’ food. Keith’s health issues and unstoppably-gaining weights were what the family was seriously concerned about. Sara even insured the cat’s future welfare by spending roughly US$3459.96 to see if he was positive with any disease that she could possibly think of.

“We’ve spent tens of thousands of pounds on him over the years. He was on so much medication in his first year trying to sort problems with his eyes and ears as a kitten.” – Sara said.

Sara fought for her adorable kitty no matter how much money and tears that she had spent. Everything she had sacrificed somewhat didn’t satisfy people on social media when she shared Keith’s photos and his weight loss journey.

“We do get abuse online and if I’d seen a cat his size years ago I would have thought we weren’t looking after him or overfeeding him [] We took him to a vet nutritionist and she told us we’d done everything we could.” – Sara expressed with the bottom of her heart.

Though Keith’s weight might still be a challenge and confusion for Sara, the cat still appeared healthy and happy overall. He has become an indispensable sensation on Instagram with nearly 95K followers who are eagerly looking forward to seeing the cat-cow upcoming photos. Sara had two other cats which can encourage her daughter to develop social skills.

“He’s a really happy cat though. I don’t think he sees his weight as an issue. He pretty much lives a normal cat life. Keith is a lot more energetic than my other two cats.” – Sara said.

Hopefully, with the protection and the guidance of God, Sara’s family, and Keith the locks’ foe, will be filled with contentment, wellbeing, and unconditional love.