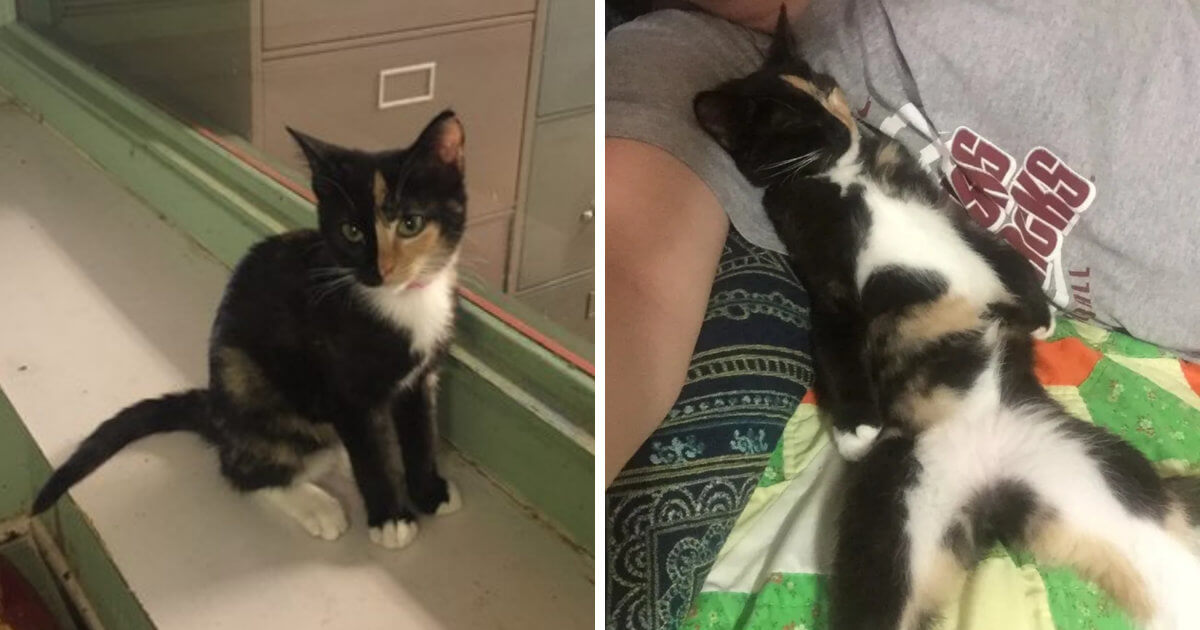 Miscarriage and women are enemies. Every woman wants to have one or two children for her life, but woe to those who have to encounter this uncomfortable condition. Frankly, no one wishes to see it happening with their wife. However, the heart-wrenching predicament occurred to an Imgur user’s wife. No matter how much effort that mraeronautic took, his wife hadn’t brought any smile on her face for more than two months after knowing that she had a miscarriage.

“I found a kitten with no mommy.” – The user said.

What does it even mean with his statement?

One day, the man visited a shelter and came across a half-faced kitty whose mom was killed drastically. The cat’s name is Callie. Callie had been fed and taken care of for several days. When the man saw the kitty and her tragic background, he knew that this kitty needed a mom like the way his wife needed her kid to love.

“After getting to meet her it turned out that she is an absolute sweetheart. I had to take her home. Her face and her eyes just brought a calmness over me and I thought she might make my wife feel the same.” – He said.

With the hope of comforting his wife after the bad news, the man took the kitty home immediately. And Callie the cat was like the woman’s pendant, she started smiling the brightest smile that the guy had not seen for a long time.

“She and Callie bonded immediately. Callie is constantly snuggled up to her momma and sleeps tucked up to her stomach at night.” – The man shared.

But Callie’s mission didn’t stop there. One morning, the man received the biggest surprise in his life, starting with a tap from his wife.

“This morning I was cleaning the litter box and got a tap on the shoulder. When I turned around, my wife had this pregnancy test and the biggest smile on her face.” – He wrote.

“Little Callie is going to be a sister! I don’t know what it is about this cat but I can just tell that with her, everything is going to be ok. Things are looking up!” – He added.

Wow! What a delightful story! Callie the cat is not only the excitement for the family, but she also plays a big role in the woman’s sensitive time. Scientifically, cats reduce stress and depression in humans. One of the reasons women cannot be pregnant is because of stress. Turns out, the man’s decision of bringing Callie home was the best one ever! Hopefully, everything is going well with this small loving family.