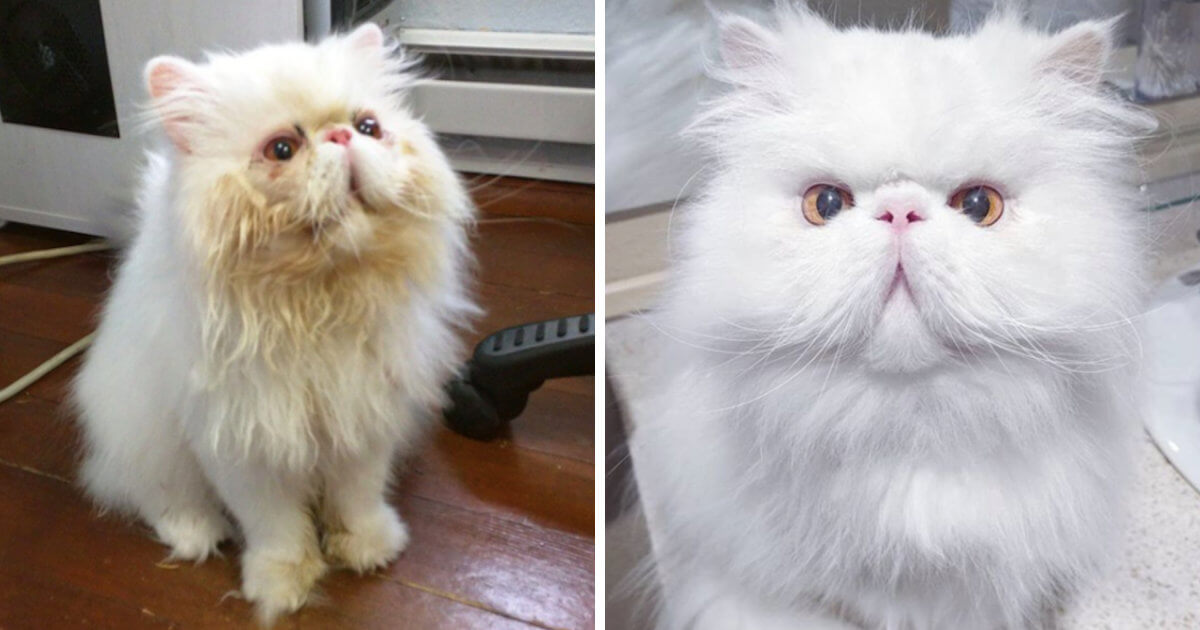 Whoever sees those pictures of this purely white beauty will never imagine that he has a tough life in the past. Other than that, you can never tell this kitty used to be blind because of his inhumane former owner, right? Fortunately, an adorable fluffy cat was rescued by… a dog person. What in the world is going on? This is getting interesting, isn’t it? Be prepared to sob, dear cat lovers, a powerful story will encourage you to see other living things by a discerning heart, not by our biological eyes.

R.J. LaCount is a dog enthusiast. He grew up with some vigorous pooches in his family, so he couldn’t think of any other animals that he would share his life with. However, there is still one hint that they can win over R.J’s heart: goofiness.

“I grew up with bulldogs in my family, and fell in love with ‘goofy’ looking animals, but am just not home consistently enough for a dog these days.” – He explained.

R.J thought he was content with the most loyal aminal in the world, so he didn’t want to find another companion until one of his friends sent a Persian cat photo to him. Persian cats usually have a flat-face, always-smiling muzzle, and a silky coat. The feline fitted R.J’s emotional condition, however, he was in the hesitancy of purebred species versus hybrid ones. He approached Seattle Persian and Himalayan Rescue instead to see how fate grow.

“I hadn’t really considered cats before until someone linked me to a picture of a Persian cat, and I fell in love with how unique they looked.” – R.J shared.

“I never liked the breeding aspect, however, so I did a search online for ‘Persian cat rescue in Seattle’ and found Seattle Persian and Himalayan Rescue.”

When he first came to the shelter, one of the staff members introduced R.J to a glamorous Persian kitty who had just come 2 days ago. He recounted his first impression of this poor kitty, Brimley.

“Brimley came from an inhumane breeder only two days prior to my call, where they were using him as the stud at a young age, and had both of his eyes sewn shut when he developed a major eye infection, rather than paying to get the surgery he needed.”

Ouch, what a tragedy to a poor little thing… That also meant the feline didn’t have a chance to see the world with his own eyes. He had to suffer from the darkness and unknown future. Little did the staff know, Brimley’s fur in the front was dyed by the thick yellow liquid which came from his severely sewn eyes.

R.J the cat-to-be dad thought it would be tricky for the cat to acclimate with his new owner. The traumatic past had distorted his conception and interaction with humans, R.J reckoned. To everybody’s surprise, everything was the opposite, R.J didn’t expect his new pet was that affectionate and friendly. The cat’s sense is always on point. Although the poor Persian cat couldn’t see, Brimley already knew that R.J was his forever dad.

“As soon as I sat down, he immediately came over for pets, purring like crazy, and I knew I was going to take him home. The rescue requires a foster period first to make sure things go well, but I went ahead and filled out both the foster and the adoption paperwork on the spot, and brought him home that night.” – He said.

Notwithstanding the vision problem with Brimley, R.J had been determined consistently to fight for his son’s life as best as he could. According to the vet, Brimley had a corneal sequestrum in both of his eyes, which could lead him to major surgery, or worst, he could be blind forever. It took a couple of months for R.J to cope back and forth with Brimley’s eyes, lots of eye drops, eye ointment, oral medication through a syringe, and painkiller pills. One day, the dedicated dad figured out a miraculous thing happened to Brimley.

“The sequestrum flakes actually fell out of both eyes naturally. He never even needed surgery.” – R.J said.

“At the last appointment, the doctor told me he had the best eyes he had ever seen in a Persian cat!” – He happily continued.

With a lot of effort and love, his beloved kitty had turned into a beautiful, fluffy cat with a gentle demeanor. The bond is getting better and better everyday. Brimley has gotten attached to his kind-hearted dad for more than 4 years now. R.J has never neglected the eye session when he takes care of Brimley. The gorgeous white cat is a moderate feline star on Instagram with almost 100K followers and still counting. People adore him not only because of his magnificent and kissable outlook but also his strength of getting over the past.

R.J revealed that after bringing and adopting Brimley for a while, he realized the cat was deaf. He actually didn’t know until he saw his adorable kitty was so laid-back when the loud noise happened. But that doesn’t a big matter to the owner. R.J relishes loving Brimley wholeheartedly no matter what happens to his little boy. R.J actually finds himself optimistic when he talks about Brimley’s deafness.

“Since he’s in a safe environment now, it actually works to his benefit in a lot of situations (namely holidays with lots of noise and fireworks, which he just snoozes through). It can also lead to some funny wake-up calls when he doesn’t quite know how to control the volume of his loud meows into my ear in the morning!” – He said.

This story is so heartwarming and empowering for those who are struggling with life problems or cat owners who are adopting an ‘imperfect’ cat. Brimley would have not overcome his predicament if R.J didn’t take everything into action. All the animals deserve a better life with nature as well as their loving humans. This is also a reminder for people who are cruel to animals for their inhumane acts. Love is in the air, everyone can love, but considering how you love is more important.