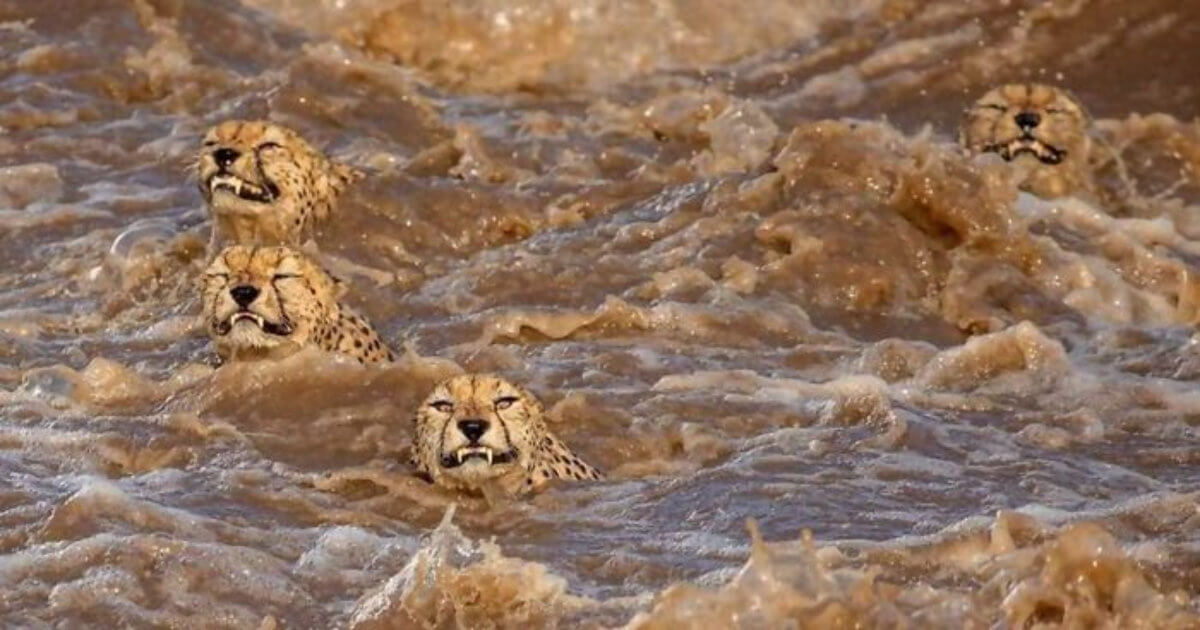 The Maasai Mara National Reserve in Kenya was being explored by a group of persons. They came to a cheetah family gathered on the bank of a river. Although the river was flooded and the current was fierce, the animals were unconcerned. They just had one aim in mind: crossing it, and they were determined to achieve it.

The travelers were taken aback as the largest cheetahs leapt into the lake. The other two soon followed. While everyone waited in anticipation to see if the swimmers would make it to the other side, photographers Arnfinn Johansen and Buddhilini De Soyza took advantage of the situation and grabbed their cameras. Both of them were able to precisely capture the unfolding drama.

Check out these incredible photos and we believe you would be surprised and laugh at the same time. Don’t forget to comment what you think about these 5 beautiful cheetahs.

Arnfinn Johansen, a photographer, claimed he had been monitoring the five cheetahs for a long period. “They hunt on both sides of the Talek River, so it’s understandable that they would want to cross it. Normally, they would cross the river by stepping on stones, but it had been raining for a long time this year, and because of the floods, it was really difficult for them,” Johansen told that “They walked up and down the river for a long time, looking for a way to cross to the other side. It was quite risky due to the strong current. Also, the Nile Crocodile lives in that river, and a cheetah is an easy feast for it.”

According to Johansen, there was a good chance of casualties that day. “Another well-known cheetah drowned or was killed by crocs not long ago while crossing the same river, so it was a major danger. The five cheetah brothers went for it after scanning the area for a long time.”

“First, the leader cheetah dove into the river, followed by two more. The group’s two tiniest cheetahs paused for a few seconds before following suit.”

According to Johansen, the gang was swimming as quickly as they could. “You could tell they didn’t care for it.” Fortunately, all of the cheetahs made it to the other side alive, and the leader cheetah growled at the river as he shook his fur and tail.

Here’s how people react about the astonishing photos