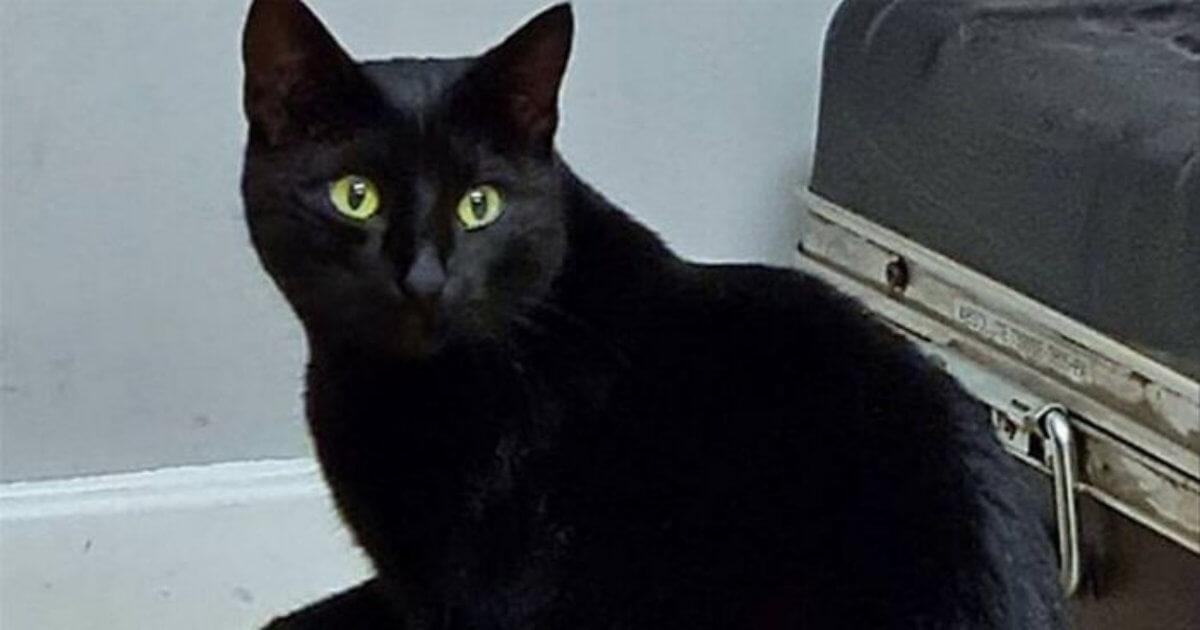 Owning cats is probably one of the best things to bring some joy to your life, since you would have lifelong, faithful companions. However, one risk of having cats is that they can sneak out on any occasion with their pliable, nearly liquid-like bodies and might never return! Ruby, a 5-year-old black feline from Brogborough, United Kingdom, got away from her home in April 2018 and went missing. Her house was nearby a truck stop on the M1 motorway, therefore, her owner concluded that she might have gone away on a truck. They gathered all forces to look for her, but no efforts were reciprocated.

However, a miracle appeared when the sassy hitchhiker reunited with her owner two and a half years later. The strangest thing about her return was that she was found around 60 miles away – Coventry. The security guard who brought her back home had been unintentionally feeding her for three weeks before taking her to the UK’s premier cat welfare charity – Cats Protection. Luckily, her owner – Jordan, had her chipped before, so it was nothing difficult to track her route and her address. Ruby returned home safe and sound all thanks to the kindness of strangers, and a little bit of luck, too!

Ruby went missing in April 2018, and her family had been looking for her everywhere

Wendy Harris, a Cats Protection volunteer for over 24 years, said: “Leighton Myers, a security guard on a local industrial estate, contacted us about a stray cat he had been feeding, and one of my volunteers Lorraine Conroy went out to scan her.” Wendy also said that she was able to access the database’s information but was unable to actually connect with her owner’s phone number.

“So I sent an email to the listed email address asking the owner to contact me,” the volunteer told us. “We also advertised her on our lost and found Facebook page. After a couple of days, I sent a letter to the postal address.”

“Ruby wasn’t in a too bad condition, which is odd as there are no houses anywhere near there, but maybe someone from the industrial estate had been feeding her,” Wendy said.

Even though she was 60 miles away from home, a kind security guard had been casually feeding her, since he thought she was a “stray cat”

The security guard was off duty, particularly on vacation, when he “took care” of Ruby at the time, so one of the volunteers for Cats Protection “was going up to the industrial estate to feed [Ruby] every day,” Wendy said. The volunteers from Cat Protection in Bedford then offered to check on the door whether Wendy’s letter to Ruby’s owner had been responded.

“Her owner rang me as a result of the letter and at first thought, it was a hoax, as she had been missing since April 2018,” the Cats Protection volunteer explained. Wendy excitedly threw back the process of getting Ruby back with her owner “He said he would drive straight here to Coventry from Bedford, so Lorraine went back to where she was and tempted her in with food, then rang the owner, who set off. I went too,”.

After being scanned, volunteers discovered that she wasn’t a stray, but rather a “globetrotter” who wanders 60 miles away from home!

“When Jordan arrived, Ruby was straight to him. She really knew who he was—she was all over him,” the volunteer shared. “It really demonstrates how important it is to microchip your cats and to keep the details up to date,” she added.

Talking to the BBC, Jordan – Ruby’s owner shared: “No words can describe the happiness I’m feeling right now. I had little hope of finding her after nearly three years, but now she’s home safe and sound.”

After this “incident”, Jordan sure would keep a check on Ruby’s location more frequently, and he was relieved that his cat was chipped. And Ruby got herself a memorable experience as a “stray cat”!