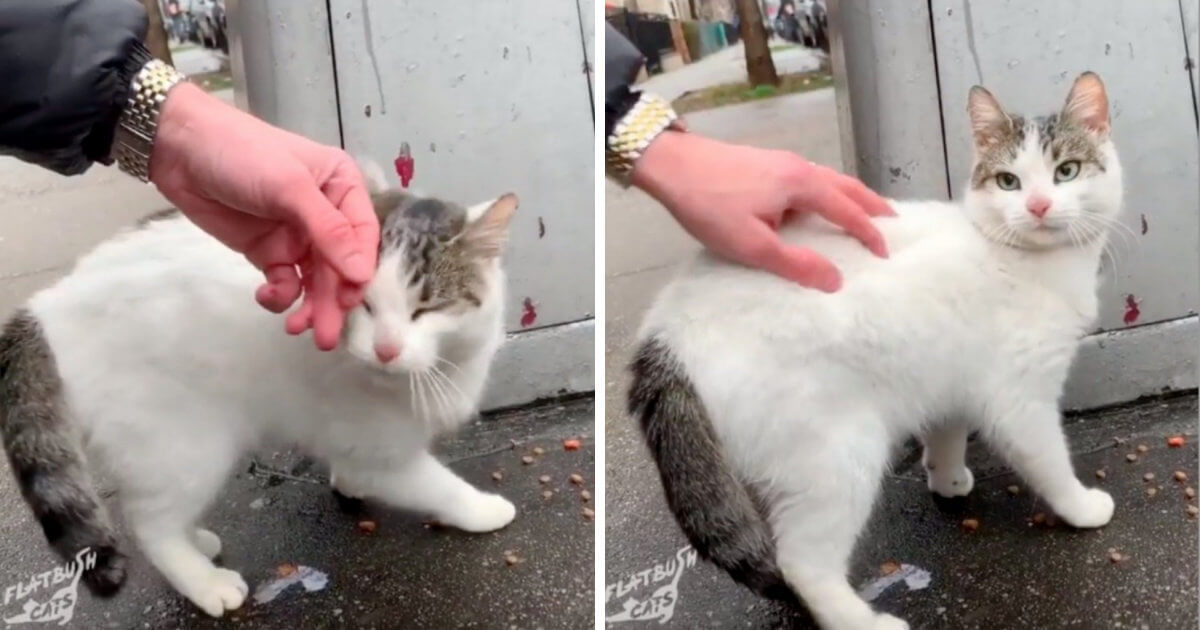 Normally, people have tendencies to look up to those who always do big things, such as being a president or celebrity. However, those who do smaller things are mostly underrated, especially the volunteers. The only thing that most people do not know is the colonies of stray and feral cats are getting larger everyday. Due to the over-purr-pulation, there are so many cat communities that are born, helping to reduce the number of cats as well as to take care of them for further welfares. One of the organizations, Flatbush Cats in Brooklyn, New York, has stood up and helped the kitties with the slogan to live by: “Cats don’t belong on the street”.

Will Zweigart, the founder of Flatbush Cats organization, went on a day, as usual, to find local stray cats and trap them. Little did he know, one day he met a very friendly stray kitty that he thought he would only come to feed her. It was said that the cat had been roaming around the neighborhood for several weeks. She happened to be a freeloader like other stray cats, who asked for food and temporary shelter.

“If we run into any friendly cats while feeding, we’re then able to help get them off the streets and try to get them adopted into a loving home.” – Said Zweigart.

The cat didn’t feel shy or defensive at all, she rushed to the man’s hand and asked for pets and love. Zweigart knew that the kitty was starving and cold under Brooklyn winter so he decided to scoop the cat to the catio and take her to the foster home.

“I could see her fur was dirty, which you usually see with abandoned or stray cats as they tend to groom less when very stressed. She had no collar and was starving, and it’s currently below freezing in New York so I wanted to get her out of the January cold.” – He said.

“Unfortunately, it’s very common in this area for cats to be dumped or abandoned outside. She ran up to our volunteer and was very talkative, and clearly wanted back inside.” – He continued.

Usually, when a cat sees a catio they know they will be trapped, so they tend to be more careful about the food inside the carrier. Surprisingly, this kitty was out of the norms. She not only showed her sociable personality but was also content with getting inside the trap without hesitation. Zweigart knew exactly the cats’ reactions when it came to trapping, so he didn’t expect this sweet cat would come to the carrier immediately.

“Cats can often be very scared and may not want to go into a carrier right away. Many have bad associations with carriers from vet trips, or if that’s the last thing that happened when they were abandoned. Traps are a safe way to rescue and transport cats even if they’re friendly.” – He said.

Eventually, the friendly cat turned the page to the next chapter of her life. Her name is Bun!

Bun was well-fed and well taken care of. She became more open to everyone though she was still a little bit shy toward strangers. When she felt safe, Bun started purring like there was no tomorrow! Zweigart also said she sprung herself to be a baker.

“She started making biscuits, rolling around, and playing with a catnip toy that we had sitting nearby. She’s currently relaxing with one of our foster volunteers. Our next step is to get her medical care including spay, vaccination, and de-worming treatment. Once she’s all set there, we’ll be listing her for adoption!” – Said Zweigart.

Bun the kitty is now healthy and nature-loving, she is ready to show her antics in her forever home! There are so many more stray cats who are waiting for adoption on the Flatbush Cats organization’s website. Zweigart’s intention for the cats is absolutely meaningful and powerful.

“Our goal is to make sure every cat in our neighborhood is spayed or neutered, which helps to prevent more cats from showing up at the city’s overcrowded shelters. We do that by fixing all of the community cats through trap, neuter, return (TNR), and then working with local volunteers to make sure the feral and street cats that we’ve fixed are fed.”

No matter what you do, whether it’s big or small, be as dedicated as you can, we will see fruitful results later through the outsiders, for example, this little cat Bun! Thank the team for being so kind and caring for the outdoor cats. They don’t have to fend for themselves in the midst of this chaotic society anymore! God bless.