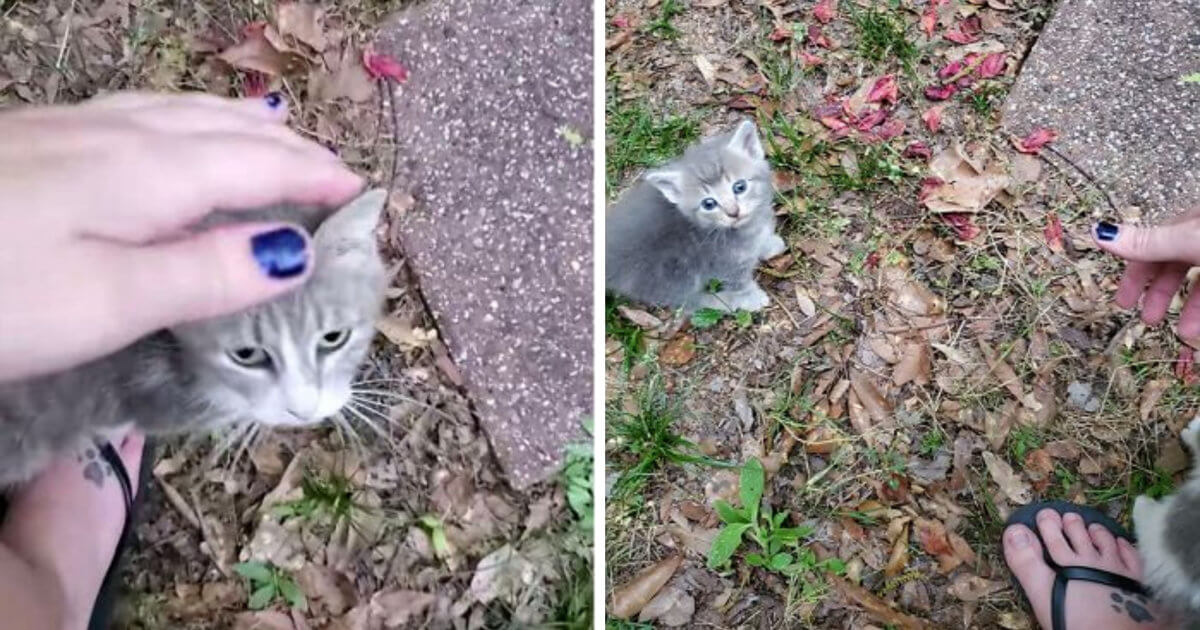 Gaining someone’s trust is the best achievement one can have, especially if that person has never given the trust to anyone. For animals, it can be easier, or even harder since they don’t communicate the way we do, but once they realize our good intentions, they will definitely repay it back! Shea Prior – a woman from New Jersey, USA spotted a stray cat wandering around in her yard a couple of months ago. With her kindness and patience, she approached the stray and was pleasantly surprised after she finally gained the cat’s trust by accepting food from her. Prior then acknowledged that the cat was producing milk and probably had kittens somewhere close by. Prior then tried to tell the mama cat where her babies were at.

It took some time to persuade the cat that she was not a threat and that she could get close enough for Prior to feed and pet her. She had no idea she was assisting a mama cat at the time, but after a few days of their new feeding routine, she noticed the cat was producing milk.

The stray cat was actually very sweet, but it seemed like she needed some help

“I was petting her and went to pick her up and that’s when I realized she had milk in and had been nursing some babies,” said Prior. She was excited about her acknowledgment and wanted to help out with the kittens, so she figured she’d just ask the cat to show her family to her.

Mama cat then guided Shea to where she put her kittens

“I started telling her to show me to her babies, and that I bet her babies were so pretty.” It seems that her words made mama cat feel reliable, and she led Prior to her babies the next day.

Mama cat has five beautiful furballs, which Prior was very delighted to meet and ready to take in her care

“She came running up to me and rubbed on my leg while making her little croaking noise she does,” Prior said. “She led me over to my shed and I looked and saw a couple of little fluffballs staring back at me. She flopped over on her side and started calling to them to come out and see me.”

The kittens were initially afraid to approach her, but after some assurance from their mother, they emerged from their hiding place.“One of the little gray ones was super brave and came up to me with his little pointy tail held up high in the air and let me pet him immediately,” Prior said. “Eventually, after about 10 to 15 minutes, they had all come up to me and let me hold them and pet them.”

They were beware of Prior at first, but after 10 – 15 minutes of ice breaking, they were meowing and climbing on Prior

She knew immediately she wanted to help the adorable family and took them all in. “I will be adopting mama cat to live with me and my other two sweet girlies! All the babies have found homes and will be adopted as soon as mama is ok with it. But for now, everyone is doing great,” she said and added that she started a crowd-funding page to help take care of the cat family. “I started a GoFundMe for vet bills to get mama spayed, and get babies checked out.”

She took Prior by her shed, laid down on her side and started calling her adorable babies to come out and meet the woman

“I’ve become unemployed due to the coronavirus. I want mama taken care of, but I can’t afford it right now. Anything will help, and if there is anything left after vet bills, the remainder will be donated to my local no-kill animal shelter,” she explained. If you want to help out Prior take care of these adorable fluffballs, you can donate here.

In the COVID-19 pandemic, everyone is struggling to fend While a lot of people are currently struggling to fend for themselves, let alone take care of animals as many people are losing jobs because of the pandemic. But some just can’t turn away from an animal in need and taking them in their care, to Gidypet, they should also be considered the unnamed heroes. Props to Prior for saving the family of six, and for not letting the situation depressed your love for animals!