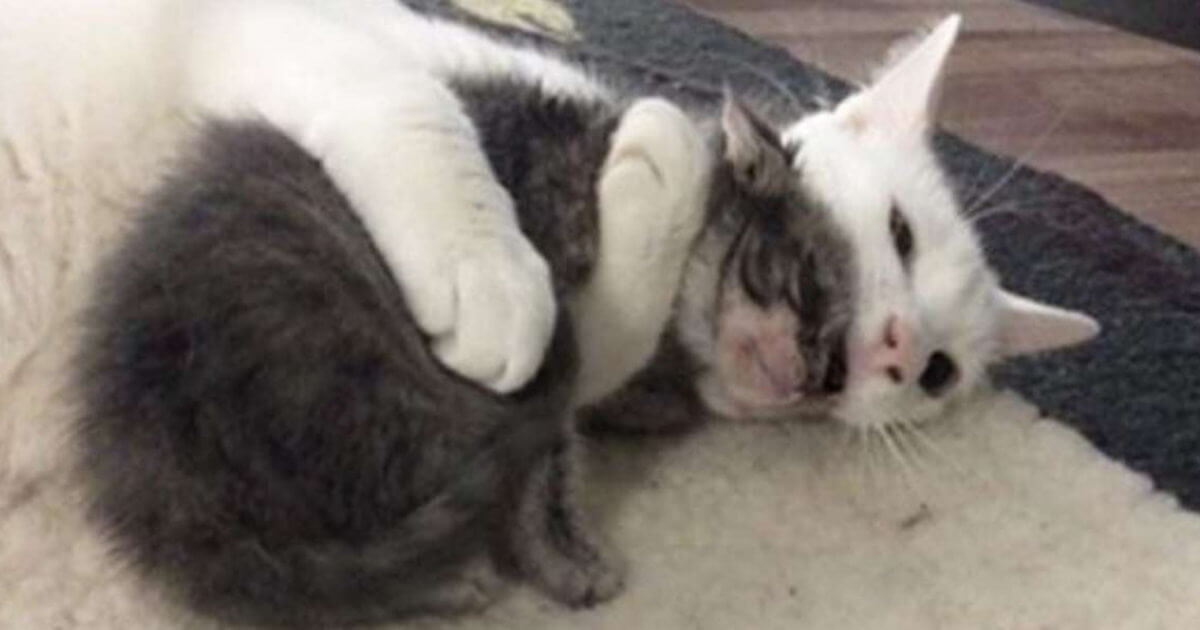 Even when he already crossed the Rainbow Bridge, his spirit will still be here to help this foster mom Ellen Carozza. Benedict Cumbercat, a surrogate dad kitty who was willing to be emotional support for a lot of orphaned kittens, passed away. Sounds sad, doesn’t it? But his earthly time was so uplifting and heartwarming to tell!

Benedict Cumbercat (Benny) was a lovely white cat who was rescued by veterinary technician Ellen Carozza. Benny the kitty was severely injured and abandoned, the woman spotted him when he was in a little chance of surviving.

“The moment I saw his scrawny hot mess of a body, I wanted him. I fell in love even with the snotty nose and his horrible eye infection. I knew he was supposed to be mine.” – Said Carozza.

The woman brought Benny home and gave him a much-needed hand, and Benny felt absolutely grateful for that. As time went by, Benny grew up and decided to follow in his mom’s footsteps – fostering other kittens who were in dire situations like he was. The kitty cat became haptic and endearing toward any kitten that his mom gave him. It seemed like he understood his mission after the trauma of being deserted in the middle of nowhere in the past, so he strived for hugging and care for those cats who were in the same boat.

“Benny is a natural with the babies. I don’t know if it was due to us being very hands-on with him and sharing the routines, but every box of kittens I brought home he had to see what was in it. It was like a treat.” – The foster mom said.

“He actually gets very depressed when we don’t have kittens. I’d like to think he is returning the favor we gave him a few years ago.” – She added.

Benny had been Carozza’s partnership in fostering ever since. He welcomed every single kitten into his little paws. So far, the white cat had fostered more than dozens of kittens.

One day, Benny’s human mom brought him an itty bitty black furball which weighed only less than average. Her name was Winifred (Winnie). Carozza learned that she was motherless, her little brother couldn’t pull through, either. However, the woman still gathered the malnourished cat and Benny closer. It was said that those kittens like Winnie required a special way to feed the nutrients inside her: tube feeding. As a technician, Carozza also had an incubator at home for kittens.

“[Kittens this tiny] don’t follow the same rules as regular kittens, so you cannot go by a chart to tell you what to expect. They require a lot more care and attention to detail.” – Said Carozza.

But the woman knew it was never enough if the kitten lacked Benny’s love.

“Benny’s role is comfort and socializing. Having another cat to snuggle into and not a stuffed toy 24/7 does wonders for their mental well-being.” – She said.

The surrogate dad was so happy to nourish and cherish Winnie with Carozza. He didn’t mind cuddling and grooming his little fostered kid in his arms. Winnie began growing up healthy under Benny’s wing. As said, when Winnie was strong and big enough, she would stay in New York with Carozza’s sister.

Carozza couldn’t deny Benny’s important role in her career path. The kittens whom she brought Benny were all in need of affection to flourish.

“When the kittens aren’t with Benny, they do get a snuggle cat mom with an artificial heartbeat for comfort.” – Carozza said.

“But it doesn’t purr. It doesn’t clean you. It doesn’t help you to be a cat. He fills those gaps in.” – She continued.

Unfortunately, Benny passed away, bringing a big sorrow to Carozza and a lot of people who had been following Benny’s daily life on social media. They felt sorry for the loss of the most affectionate kitty who was devoted to every single little soul.

After Benny’s loss, the woman rescued another white kitty who looked exactly like Benny! His name is Stambrose. They are now living and fostering some more poor animals. However, there is always room in Carozza’s heart for Benny. She sometimes posts Benny’s photos along with Stambrose’s on Instagram. Hopefully, Benny is happy in Heaven when he sees her mom’s journey from above.