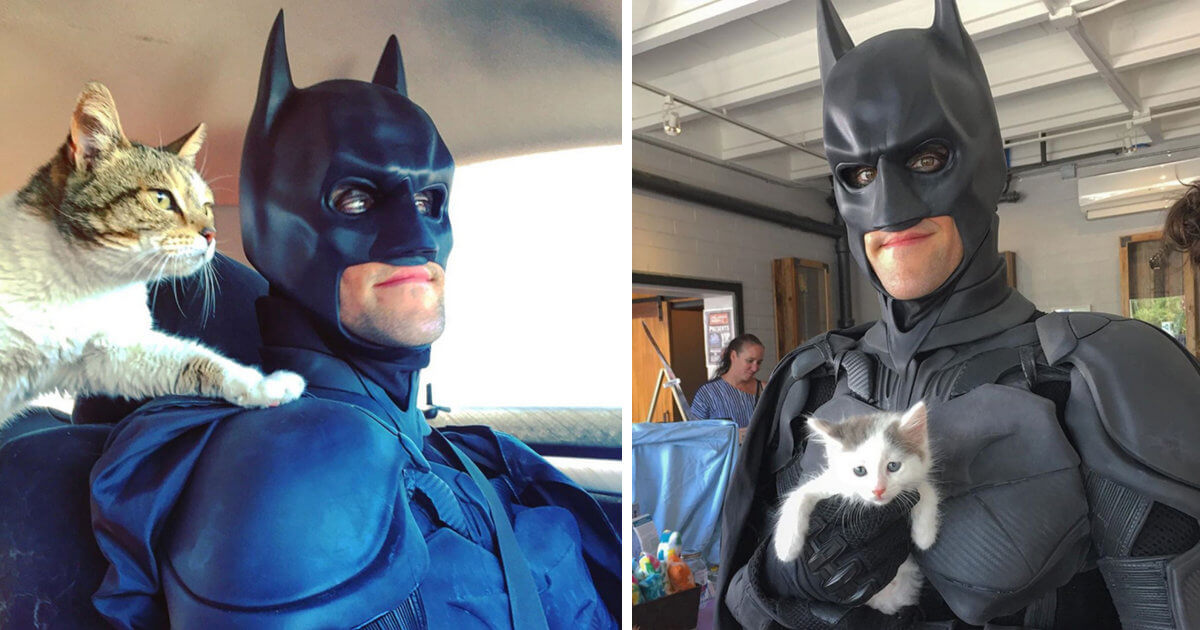 We have a real hero in town, so move over fake Hollywood superheroes with CGI superpowers! They say that not all heroes wear capes, but this one happens to be wearing one that is quite stylish. What’s more cooler is that this superhero is fighting for those who don’t have a voice – animals who have been abandoned in shelters. Chris Van Dorn, 27, has always been a fan of Batman, but when he started helping for animal rescue organizations in the Orlando area, he decided to use his alter ego to raise awareness about the significance of pet adoption.

Meet the real-life Batman who helps animals in shelters

Chris first wore the Batman outfit to keep his superhero missions hidden (such a classic superhero strategy!). The 27-year-good old’s deeds, however, brought his identity into the spotlight after GoFundMe named him a “Hero” in 2019.

Chris Van Dorn, a 27-year-old animal enthusiast, is hiding behind the hero mask

Chris founded Batman4Paws, a non-profit organization, in 2018. Since then, he has traveled across the country on multiple occasions to save animals from euthanasia and find them a forever home.

In real life, Batman drives a modest Honda Accord, but he hopes to meet a kind soul who will offer a larger van so that he may transport more animals on his rescue operations. Chris also believes that one day, with his pilot’s license, he will be able to use air travel as a more efficient mode of transportation for our animal friends.

Chris, on the other hand, hopes to update his transportation in the future so that animal rescue missions can be more efficient

“As a kid, I admired the ideas that superheroes like Batman embodied, and I imagined that Batman would be the ideal vehicle to symbolize the spirit of benevolence. As a result, Batman4Paws was conceived. Chris adds on his GoFundMe page, “I would help save animals in any way I can, all while costumed as the Dark Knight himself and becoming a symbol for aiding those in need.”

“To make my goal a reality, I founded Batman4Paws as a non-profit organization to rescue and transport dogs, cats, and other animals in need throughout Florida and beyond to forever homes, no-kill facilities, and foster homes. I (Batman!) handle all transportation myself, utilizing whatever means are necessary, though I prefer to fly.”

Batman’s normal operating range is 500 miles from his residence in Orlando, Florida

Batman receives his requests using modern modes of contact such as email, phone, and social media. Because Batman works weekends, his normal transportation days are Monday, Tuesday, and Wednesday. “Once a transport date is determined and the furry companion has all of the necessary papers, he picks up the animal in need and transports it to safety,” according to his official Batman4Paws site

The superhero, on the other hand, is willing to go the extra mile to aid those in need

“He prefers to stay within 500 miles of his home base in Orlando, Florida, but if the need arises and he is available, he has been known to expand his ring of service. He’s already traveled all the way to Vermont and back! As his rescue increases, he hopes to broaden his reach,” according to his official Batman4Paws page.

Chris acknowledges that dressing up in a costume isn’t necessary to save a furry friend’s life, but it does assist him in starting a conversation about the significance of adoption and fostering.

However, the 27-year-old is modest about his good actions

Chris told the reporters, “I’d say I’m just the intermediary.” “The folks who give these dogs a nice, loving home are the true heroes.”

“What defines me is not who I am below, but what I do”

You can donate to this real-life Batman’s GoFundMe page if you want to help him out. Over $30,000 has been raised but Chris hopes to raise $35,000 this time.