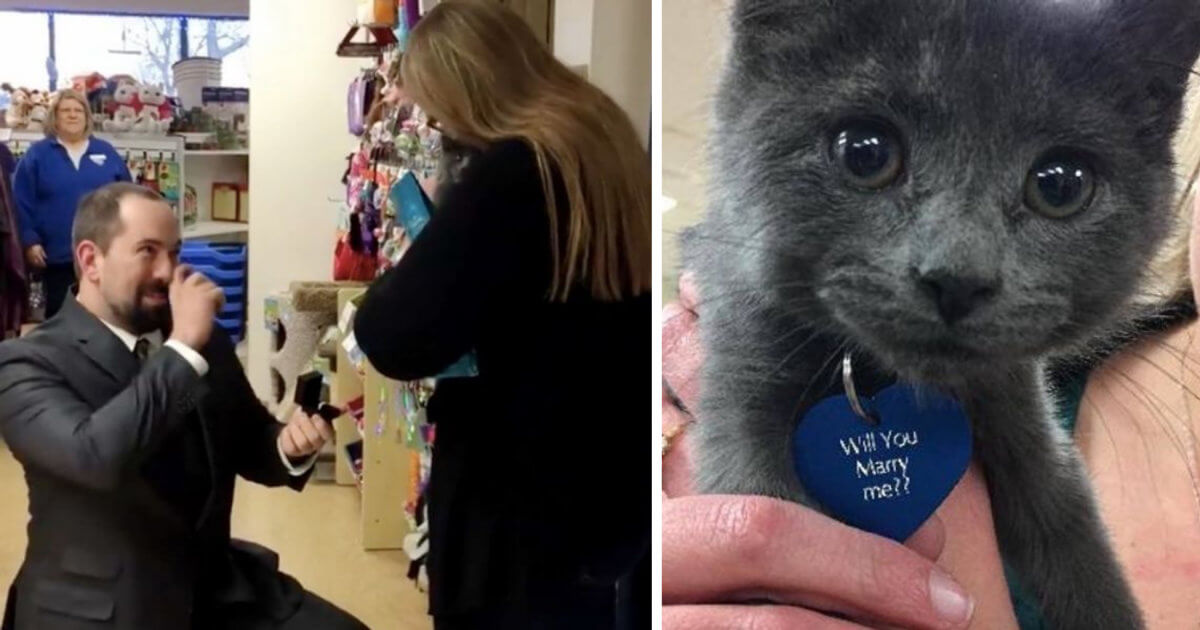 Men are brilliant at proposing in an unexpected way. Especially, when they are cat lovers. Statistically, men who love cats have strong emotions and empathy than others. If you don’t know what I am talking about, let’s dive into this heartfelt video!

In the video below, there is a woman named Katherine (Kat) holding a little British Shorthair kitten Gandalf at SPCA in Erie County, NY. Then a woman arrives and tells her to read the tag that is on Gandalf’s neck. It is written: “Will you marry me?” Kat knows right away this is a whole plan of her boyfriend Jerad, who also happens to be a cat lover like Kat.

The video is shortly recorded but it touches so many people when the surprise present is not only a ring but also a kitty cat. And what is happier than seeing Gandalf live happily ever after with his human parents?

Thanks to the SPCA organization and Jerad’s aunt, the couple has a very memorable proposing moment. They carefully set up a plan and it succeeds!

“Kat thought she was being filmed for an adoption video…but we knew otherwise.” – The SPCA said.

Jerad and Katherine started dating on Thanksgiving 2014, after being together for 2 years, Jerad decided to propose to his girlfriend. Needless to say, Katherine says yes after Jerad’s successful surprise!

“I was very surprised! His aunt works at the SPCA and was fostering the kitty, and we fell in love with him. I thought Jerad was at work and he surprised me by showing up and proposing. Gandalf’s name tag said ‘Will you marry me?’ It was so cute.” – Kat said.

People also are curious about how the cat is doing, Kat is happy to share with the world.

“He’s running around and getting used to his new home.” – She continued.

Voilà! Gandalf’s adoption is the most remarkable day for the cat and the couple as well. Men who love cats know how to make women’s hearts go pit-a-pat. If you are a guy who is reading this article, this might be one of the most romantic ways to melt your girl. Let’s follow in Jerad’s footsteps, who knows a miracle will happen like him?