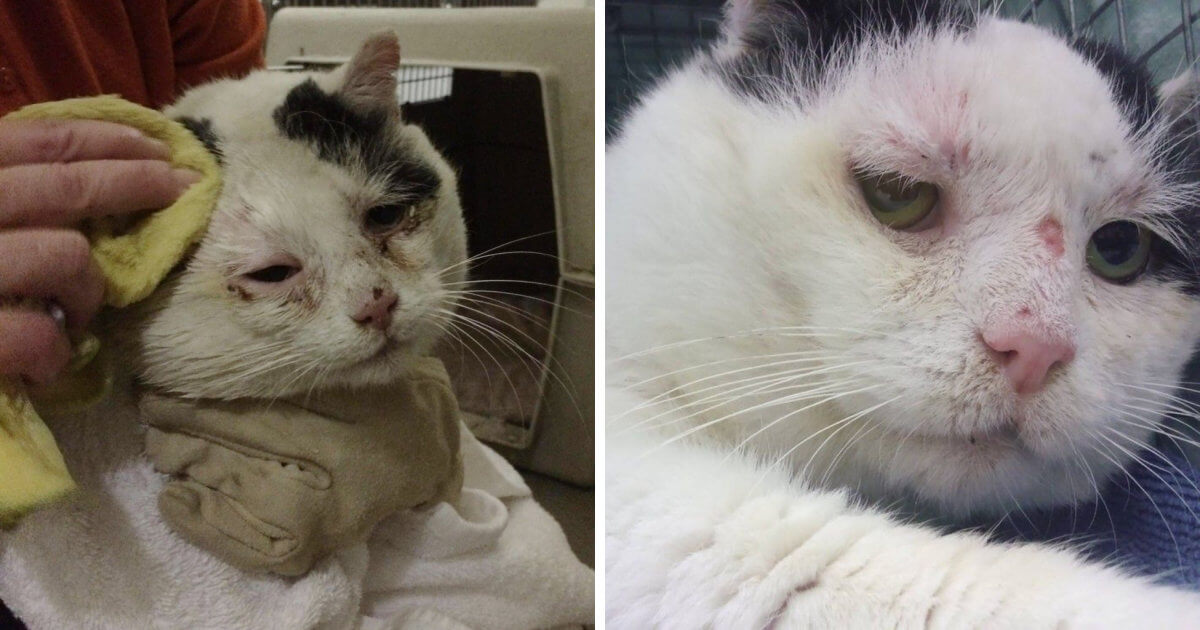 Sometimes, people overlook feral colonies because they think those cats will not have any interaction with humans. However, feral cats are the reason for the overpopulation in terms of this species. Their fertility is not involved in by humans, so it becomes uncontrollably overcrowded. Because of being wild and homeless, injuries and infections are familiar for the cats. On top of that, they have to fend for themselves to get food from place to place.

Tuffy the kitty, who happened to be a semi-feral cat, fought back and forth for his sake. He is one of the examples which depict precisely what a feral life would look like. Thankfully, there was a kindhearted man who gave Tuffy a second chance to enjoy a new chapter in life.

Tuffy usually hid behind the bushes of the man’s house. Knowing that there was a cat asking for food, he started feeding him for a couple of months. But the cat was getting weaker whenever the man saw him. The man immediately contacted Vancouver Orphan Kitten Rescue Association (VOKRA) after trapping him into the carrier. Trapping feral cats is the safest way for both parties, those cats will be brought to the vet and have a full checkup, including blood test, respiratory system, and infections.

“Tuffy was always running and was very hard to catch him, but the man was able to lure him into a carrier and contacted us.” – VOKRA shared on Facebook.

As you can see, Tuffy’s sinuses were swollen because he had a cold. Furthermore, his eyes and other parts were also damaged.

“He let us clean his ears and eyes, give him the needed medicine and add antibiotic eye cream.” – The staff of VOKRA said.

After several weeks, Tuffy’s health was gingerly better. He was no longer afraid of humans because he knew that all the staff was there to help him overcome this tragedy. As time went by, Tuffy the kitty was more open to people. He let them pet him, wash his face, and give him oral antibiotics to help him heal his cold.

A lot of patience was taken, a lot of love was given, Tuffy and the shelter bonded firmly. The cat was pleased to go on the next step: neuter.

“As he arrived at us covered in fleas with his fur entirely tangled, we shaved the mats off his back which seemingly made him feel much more satisfying.” – VOKRA stated.

During Tuffy’s recovery, VOKRA had been updating his journey, and some caretakers of feral colonies recognized Tuffy. Turns out, he was in the colony for over 9 years and shared food with other cats.

“He would always stay by the bushes and wait until the feral cats ate, after that he came and finished off the food. These caretakers hadn’t seen Tuffy for about a year, though.” – The shelter wrote.

Surprisingly, Tuffy’s previous colony was only two blocks away and across the canyon. He escaped the colony to the man’s house and luckily, got saved. Eventually, people could estimate his age, which was about 12 years old. There was only one thing that the staff was concerned about. Tuffy was positive with FIV+, so he couldn’t stay with other cats in the same house. People came up with another solution for the poor cat.

VOKRA transferred Tuffy to Katie’s Place Rescue Shelter, a place where other kitties also had FIV+, to stay. They equipped outdoor/ indoor enclosures so all the cats could stay in their own carrier with great distance.

“We do not want to be scared all the time and have made the decision to move him to our monitored Safe Feral Area where he will have a heated cabin and a big, nice forested area enclosed by a fence.” – Katie Place Rescue Shelter stated.

Life is tough, so is Tuffy! Hopefully, he will have a great time recovering in the shelter with his feline friends. Moreover, we pray for the kitty will find a loving home with an enclosed yard, lots of food and toys, and of course, affection from his future owner!