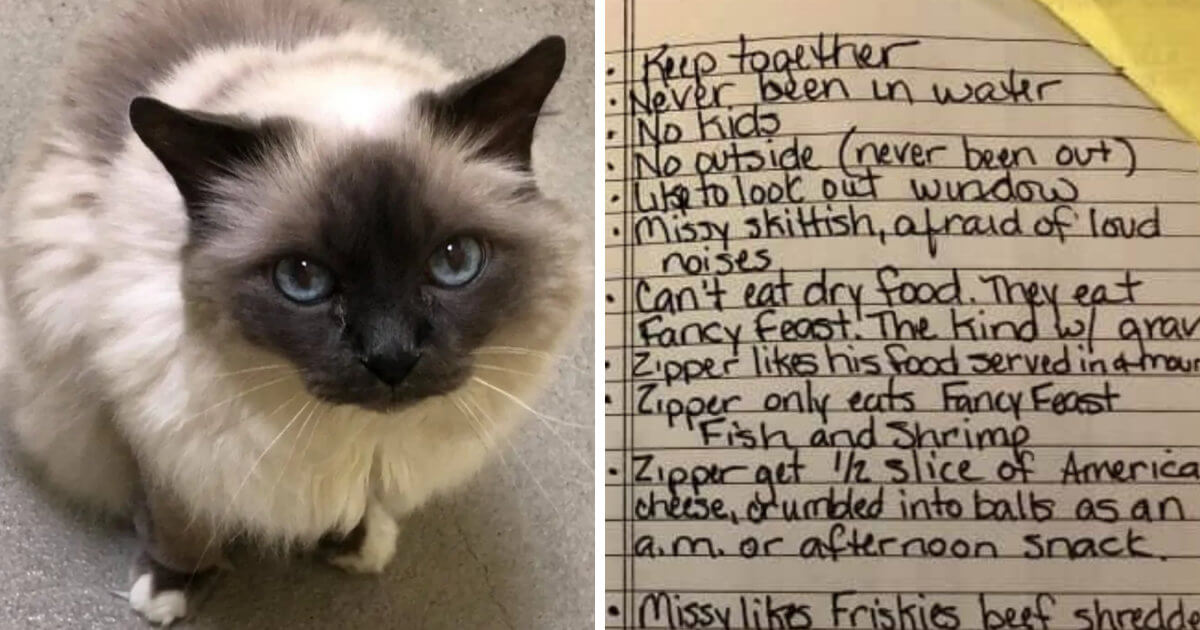 Unconditional love is the act of sacrificing our mind, heart, and soul for one another’s sake. There was an elderly in Maryland who wrestled her mind and family to trade a better life for a pair of 16-year-old Birman cats. Miraculously, a local shelter fell in love with these 2 cats and they also received a heart-wrenching note before the woman left. After being bombarded by a lot of adoption offerings, a furry duo found a perfect forever home. Furthermore, other senior cats were also adopted, indicating that all cats are worth rescuing and loving.

When Missy and Zipper, an inseparable pair of Birman cats, were kittens, a woman loved them with all her heart and they were well-cared-for. She had been with the cats for 16 years, alone in a house, where the joy was packed in a furry and soft form. Missy was a skittish kitty, who was shyer than the sibling Zipper, who appeared to be quickly adaptive and friendly. The woman and her cats were getting older until she had to come to the life-changing decision. Because of her age, she was sick and had to be in the nursing home. But she couldn’t let her cats alone since no one would understand them than her. She asked whether the duo could come with her but it failed. The woman was heartbroken because her family didn’t want to adopt the kitties for her neither. Missy and Zipper were reluctantly sent to the Anne Arundel County Animal Care & Control (AACAC) in Virginia.

However, not only did the woman send out her beloved kids to the shelter, but the staff also received a heart-rending note which was written what her cats’ food preferences. It was said:

Never been in the water

No outside (never been out)

Zipper likes his food served in a mound.

[He] gets 1/2 slice of American cheese–crumbled into balls as an A.M. or afternoon snack.

At night they get to eat Cool Whip off your finger. Zipper gets 5 fingerfulls. Missy gets 4 fingerfulls, if they want.”

How endearing and muffled the note was! We can clearly feel how much she loved her sweet Birmans. When they were together, Missy and Zipper always got special treats after the meals. The cats meant the world to her! The staff was touched by the note so they kept the duo of purr together in a large kennel. Regardless of the age, the felines had stolen people’s hearts in the shelter. AACAC thought that they deserved something better than living in the shelter in their entire life, so the non-profit organization shared this bittersweet story on a Facebook page with a striking note attached.

“The shelter is reaching out to its rescue partners and to groups that specialize in Birmans, but we’ll be honest: A pair of 16-year-old cats who must stay together is a hard sell, even if, as senior cats, they are available for free from the shelter. Their best chance for a happy forever? An adopter with an enormous heart, a quiet home, a sunny windowsill – and maybe even a comforting tub of Cool Whip.” – AACAC wrote in the post.

To everyone’s surprise, the post was whoppingly garnered people’s attention, many adoption offerings were received. Within 24 hours, one woman in Oregon saw this viral post, she immediately contacted the AACAC for the details. Turns out, she didn’t adopt the cats for herself since she was 2,600 miles away but she wanted to bring them home for her parents who were just only 5 miles away from the shelter. Her condition was fit with the AACAC since they didn’t want Missy and Zipper to have to deal with the trauma of long-distance travel. The woman also shared that her parents had just gone through the loss of their former cat, so it was time for them to restore the joy.

When the elderly couple came to see Missy and Zipper, everyone was thrilled. The staff was so happy when they could find a perfect home for senior cats. The woman’s parents were absolutely in love with Missy and Zipper at the first sight. Missy, as shy as always, took a few minutes to become acquainted with new parents. Meanwhile, outgoing Zipper was licking their faces without any boundaries. Finally, the cats found a new and forever home!

But things were getting more heartwarming. After the viral story was exploded, many people came to the AACAC to adopt senior cats. The miracle also came to two 14-year-old brothers named Ralphie and Alphie; another pair of 14-year-olds, Kitty and Junior; a 6-year-old FIV-positive cat Bisty Bee. Hopefully, we will see more loving stories of senior cats with people who have golden hearts in the future.