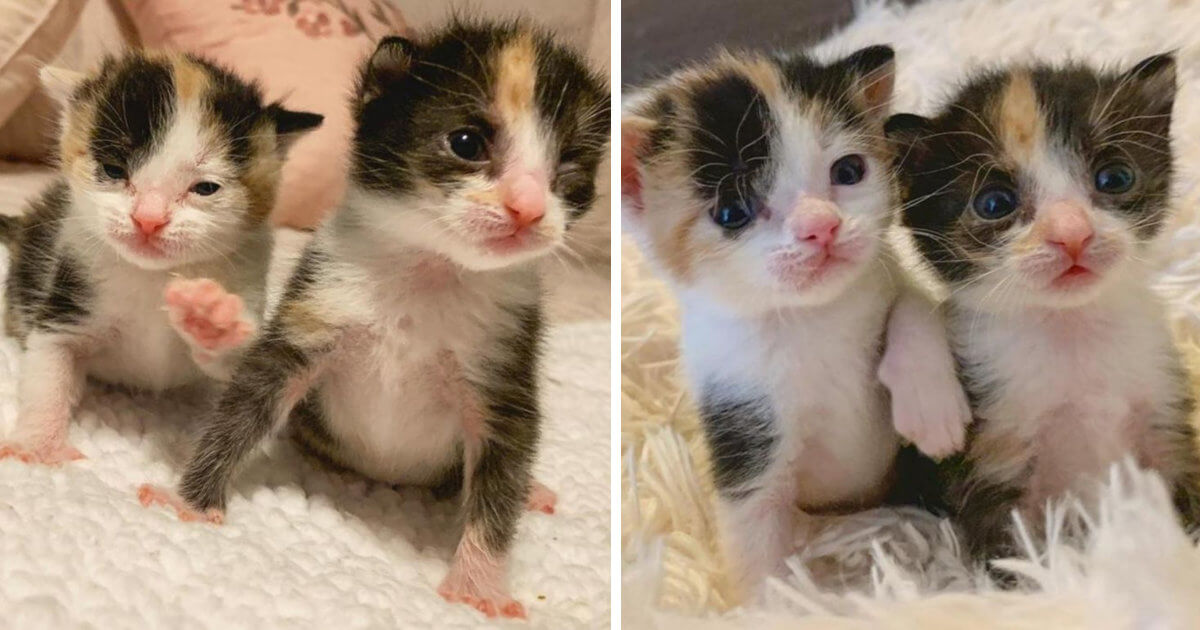 Since they were discovered together on the side of the road, two kittens have been each other’s strongest supporters. And they made it through, here is what happened.

At less than one day old, a couple of kittens were discovered along the road. They had been abandoned by their mother, who was nowhere to be seen. Despite the lack of food, the calicos kept each other going.

They were picked up by a Good Samaritan who ran to get them help. The feline sisters were transported to Sparkle Cat Rescue (in North Carolina) with the help of volunteers, where they will be cared for by an experienced fosterer.

Sarah Kelly, the kittens’ Foster Mom, began feeding them every two hours around the clock as soon as she received them. Soleil and Luna, the kittens, nuzzled up to a snuggle toy inside their incubator after getting all cleaned up and their bellies full, and fell asleep almost immediately.

They were very small, but they already had amazing courage and a strong want to live. The sisters snuggled together, refusing to leave each other’s side.

Without their mother’s milk, these tiny infants are prone to illnesses. Luna had an eye infection that required treatment on a daily basis.

Soleil became a fierce protector of her sister, wriggling her way to Luna after each feeding. As if she was trying to console Luna, she would lay her body over her or keep a paw on her at all times.

The calico sisters were inseparable from the start, like two peas in a pod.

Luna’s biggest supporter was Soleil, who stayed by her side throughout the entire week of her rehabilitation. “She adored Luna and was quite connected to her.”

Luna gazed up at her older sister and followed in her paw-prints. The kittens began singing the song of their people whenever Sarah entered the room with bottles in her hands, with Soleil taking the lead and Luna lovingly following for a flawless duet.

Soleil, the confident, outgoing sister, reached up to nuzzle into her foster mother’s face, while Luna sat back and watched, learning from the best.

When the kittens were old enough, they were moved to a larger suite with a large playpen where they could roughhouse. Together, the dynamic couple continued to refine their stride. When they played, they were constantly in each other’s sight, copying one other.

“These ladies have a lot of personality. Luna is spunky, cautious, curious, and loving, whereas Soleil is lovely, affectionate, and obsessed with attention.”

Soleil has always been a bright spot in her sister’s life, always watching out for her and encouraging her to do new things. She’s a purr machine who enjoys having her belly rubbed and kneading on everything soft she can find.

“She was always a joy to be around. It was impossible not to fall head over heels for this small light “Sarah remarked.

Since the day they were discovered on the side of the road, the two sisters have been together. They’re attached at the hip and are always planning their next stunt.

Sarah hoped that a particular family would open their hearts to both kittens when it came time to find their forever home, so they could be together forever.

The feline sisters’ desire came true after more than two months in foster care and much anticipation.

“They were legally adopted as a couple. That was the ‘happy ending’ we had envisioned for them “Sarah penned an essay.

“We are ecstatic for them and their amazing new family,” says the couple.

Nala (renamed) and Luna, the kittens, are having the time of their lives with people who adore them.

“They are thriving in their new forever home. They are adored and pampered. We are overjoyed for these beautiful young ladies, who will always have a special place in our hearts.”