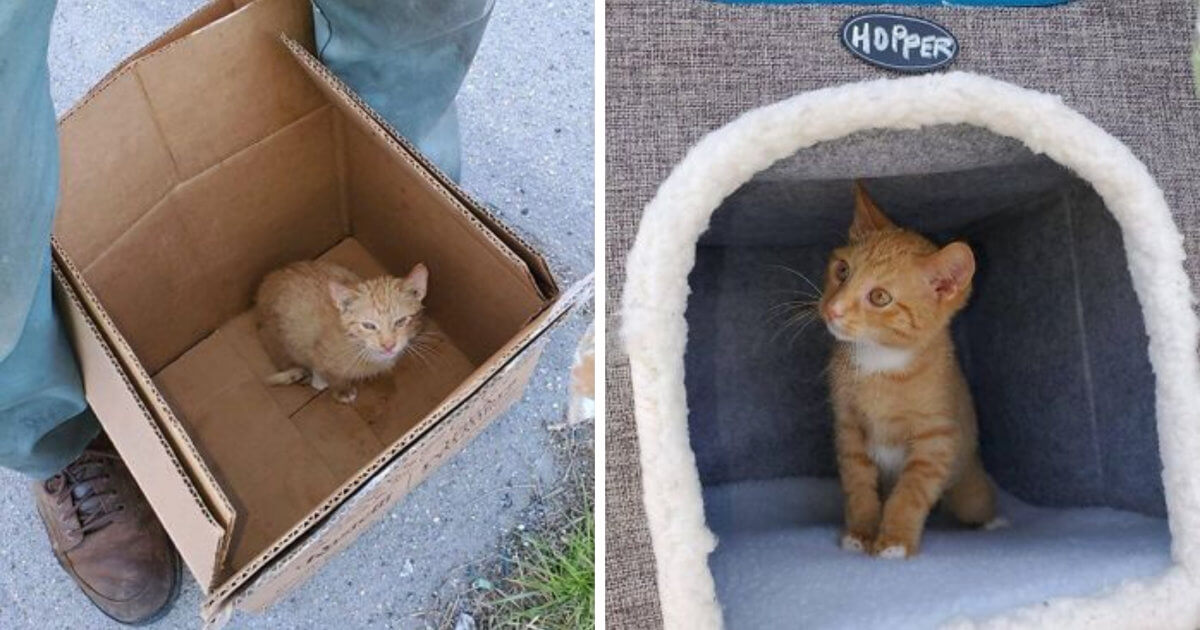 Thought it was just another Monday morning that the sanitation workers were going to have a blast as they started their daily routine in Queens, New York; but this morning was unpurrdictably odd. While William Montero and John Kase were working in the back of the garbage truck, one of the two workers heard a meow and he was hoping it was just a toy. 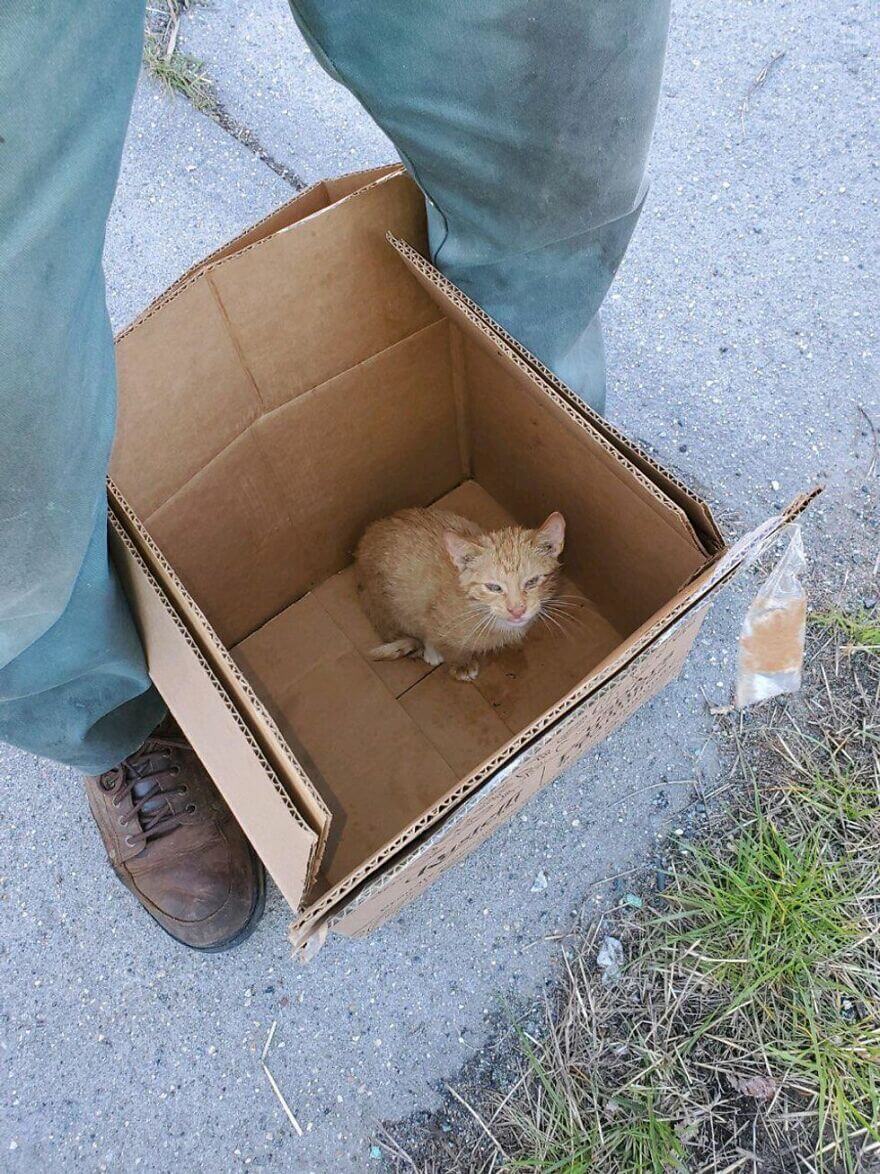 “My first thought was ‘I hope this is a toy I’m hearing.’ Unfortunately, it wasn’t.” – Montero said.

There was a ginger tabby kitten who was crying for help in the trash bag, he was left on the sidewalk where the two kind-hearted were on their duty.

“We opened the bag to find a kitten. His heart was beating very fast. We think he was in shock, so we reached in and grabbed him.” – he continued.

William Montero and John Kase were on their usual route in Queens. As they were tossing the bag into the back of the truck, they heard a meow for help in one of the bags 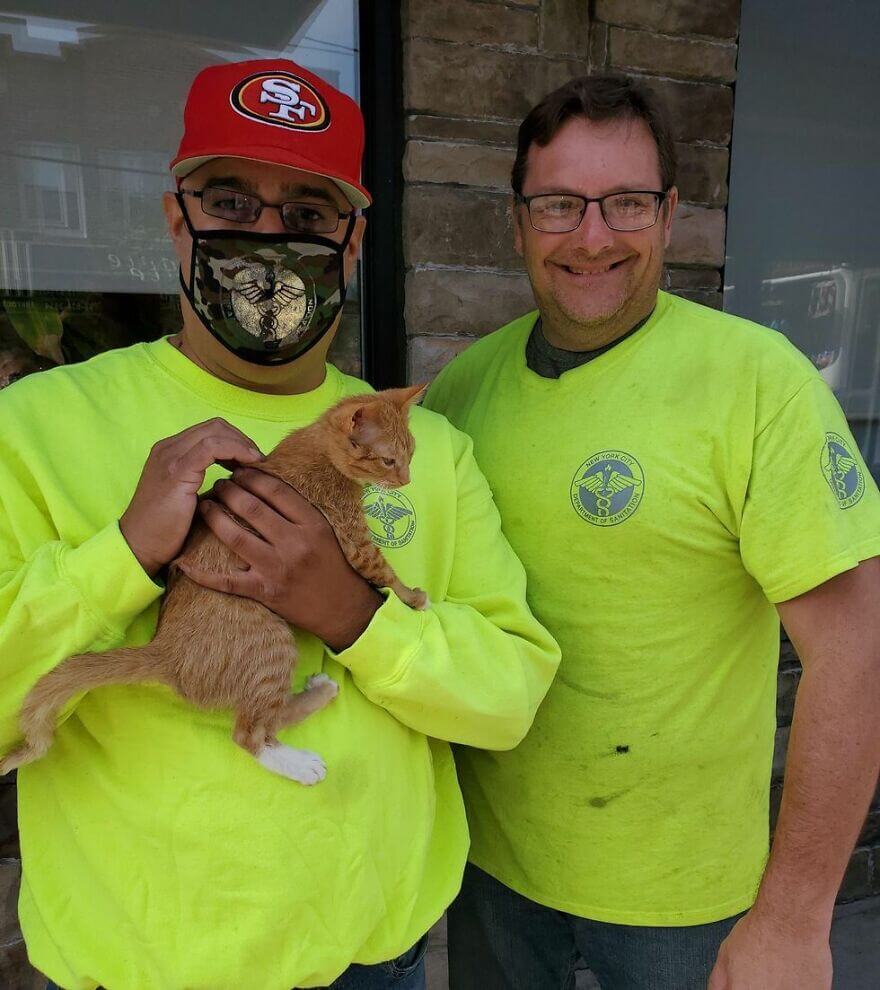 They thought it must have been some more cats around the area, so they tried to look for others in another garbage. There was only this poor kitty who was in the middle of a distressful situation.

“Who would do this? Putting the cat in the bag… There are so many different outlets to get to help a cat with a better life than to put it in a bag and tie it up and tape around the top. I can’t help but think it was intentional.” – Montero was shocked. 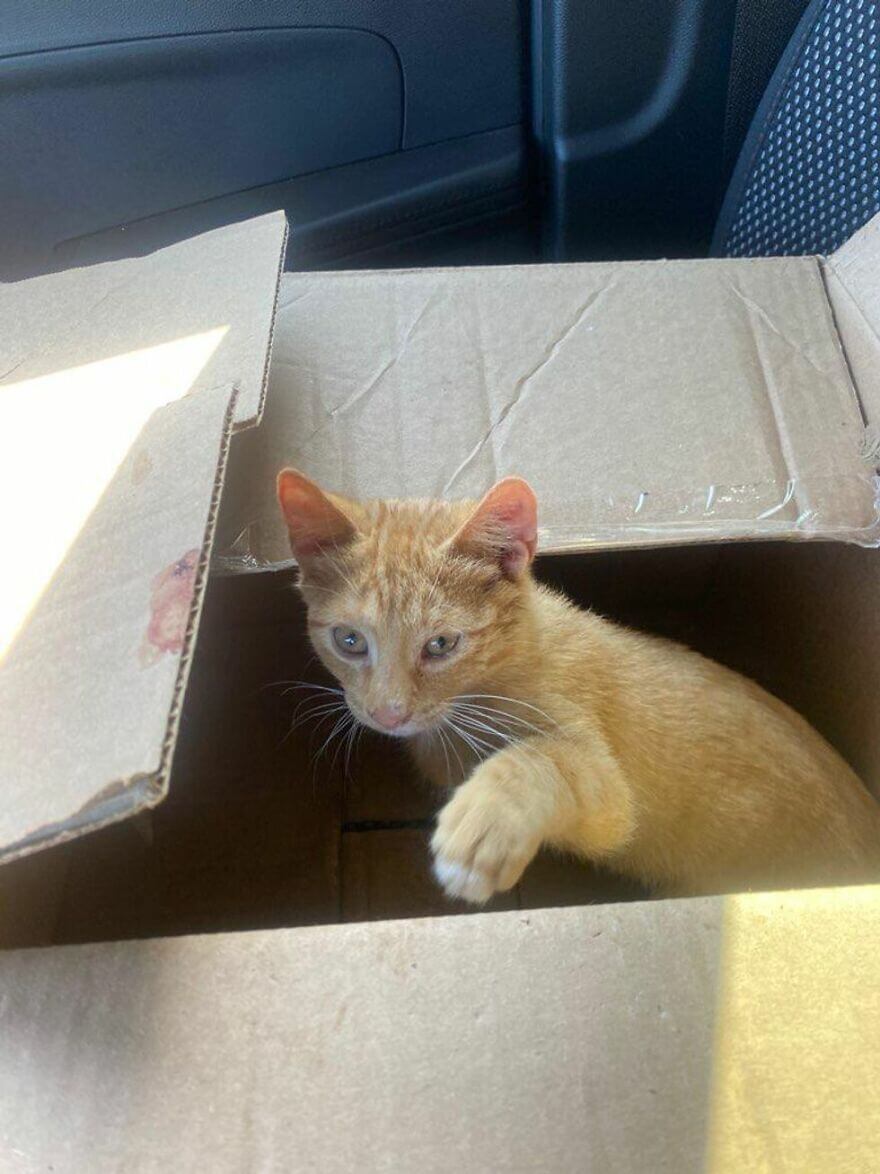 Standing in front of the frightened kitten, Montero and Kase did nothing but put him to cardboard instead, took out his dirt in the eyes, Kase lay him on his chest to calm the cat down.

“We tried to keep him calm until my supervisor came to take him to the vet.” – Even though being animal lovers, they wouldn’t forget the workload they had to deal with in a day. While waiting for the supervisor for a little help, two workers debated choosing a proper name for a cat. And the outcome was heart-warming.

“The nickname for the back of the garbage truck is The Hopper. My partner and I were debating between Hopper and Rusty. We went with Hopper.” 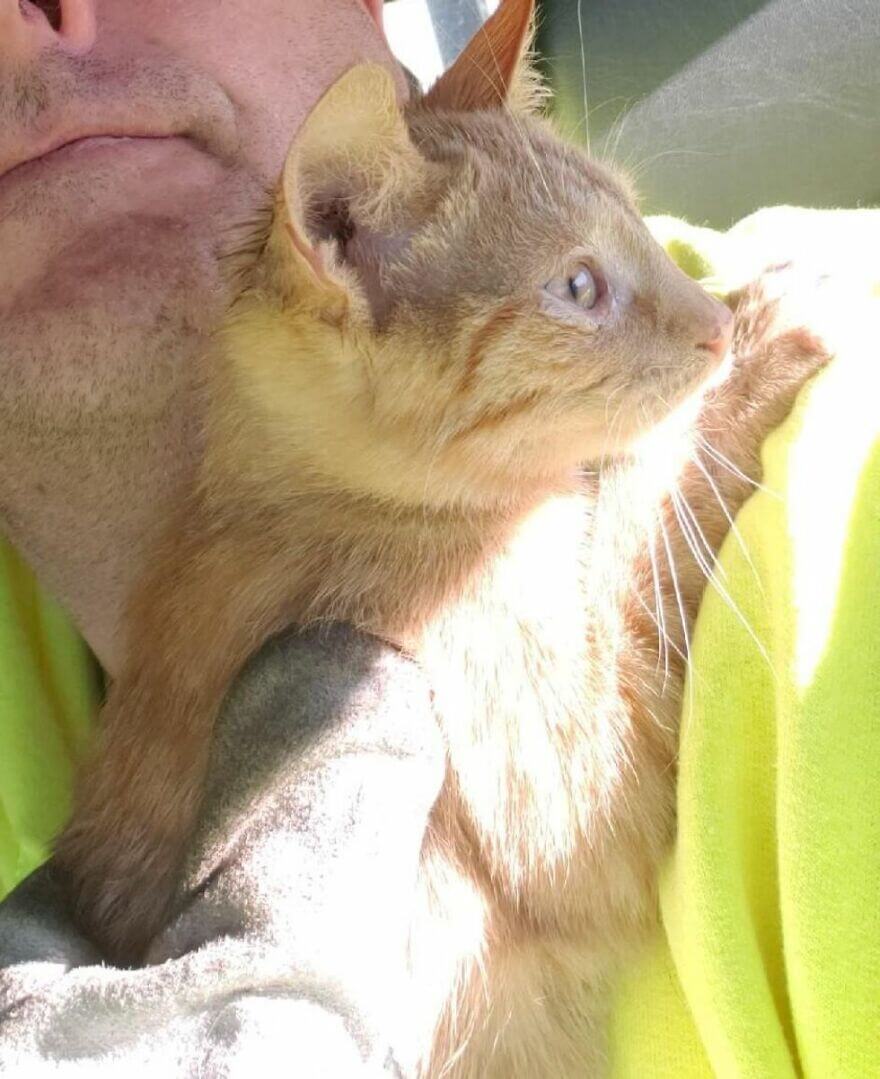 The baby kitty was taken to the vet and he was estimated to be 10 weeks old and had an upper respiratory infection. With the greatest mankind of William Montero and John Kase and the professional medical protection of Noah’s Ark Animal Rescue, Hopper the ginger kitten was given a foster home before having a forever one. After settling everything down, everyone was happy to back to their job again, Montero and Kase also bought a cat bed and some supplies as a parting gift.

They decided on the name Hopper, as it’s a nickname for the back of the garbage truck. Their supervisor took him to the vet as they carried on with their work 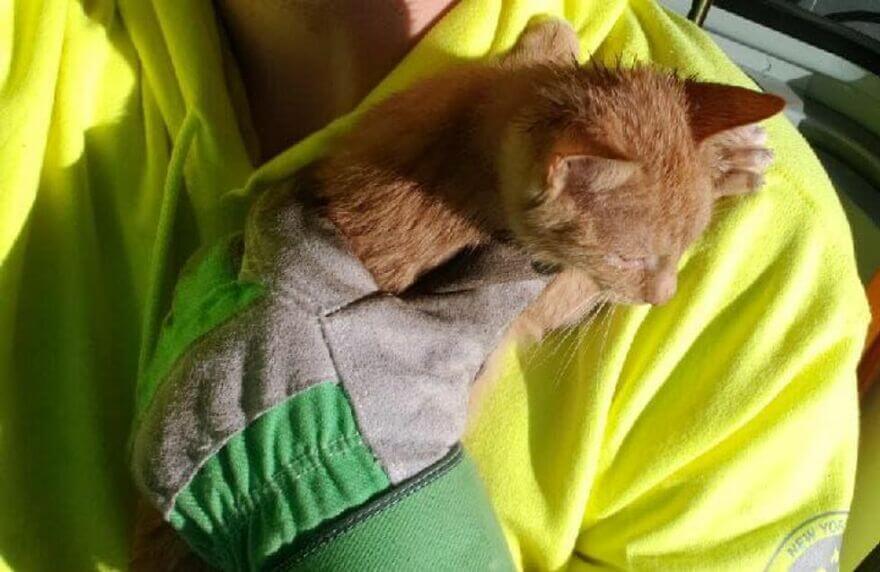 Noah’s Ark Animal Rescue founder Denise Hock had a strong opinion on the out of humanity situation. “People are just disgusting!”- Hock said.

“What would go through someone’s mind to tie a cat in a bag and kill it? If you don’t want it, call someone. Take it to a precinct. There are so many shelters. It makes no sense why someone would do something so horrible.”

Montero and Kase bought a bed as a parting gift. Hopper was then sent to Noah’s Ark Animal Rescue 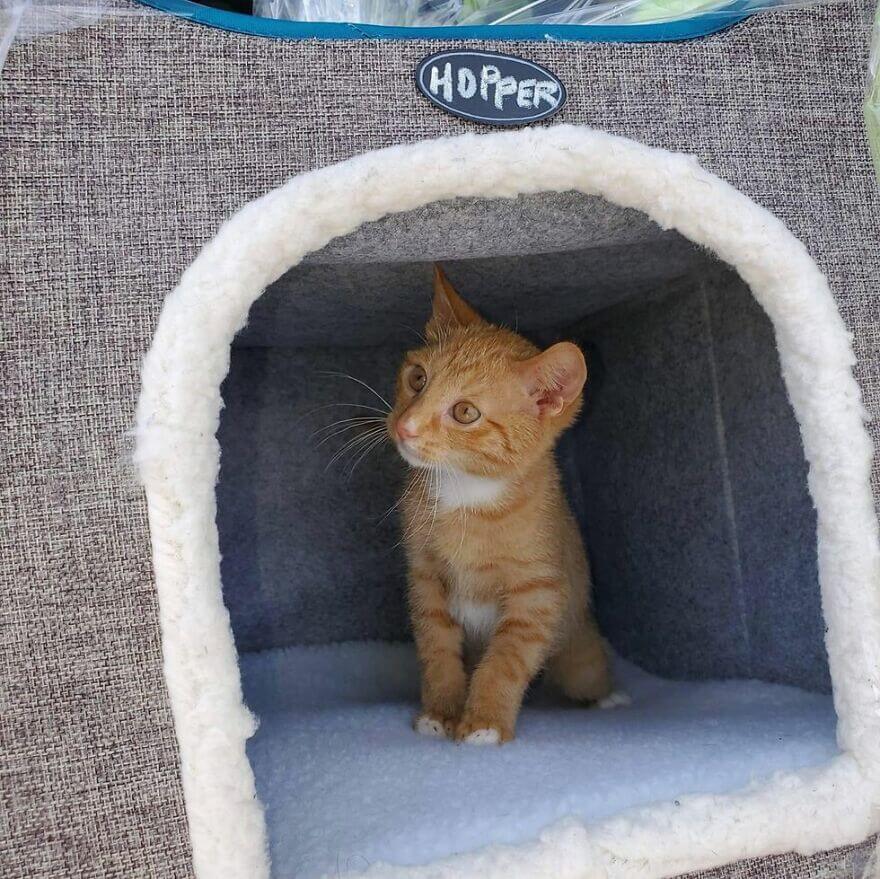 What do you think about this story? Share with us in the comment below and don’t forget to hope our poor little cat Hopper to have a home that he deserves!

As of now, the kitten is recovering in a foster home. His health is stabilizing and he’s looking for a forever home 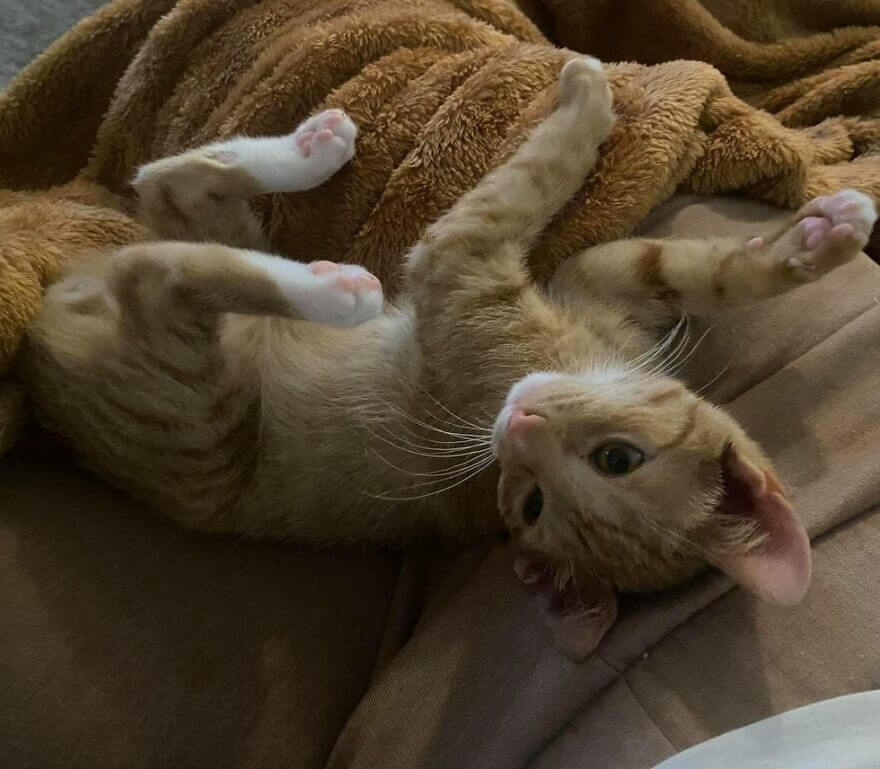