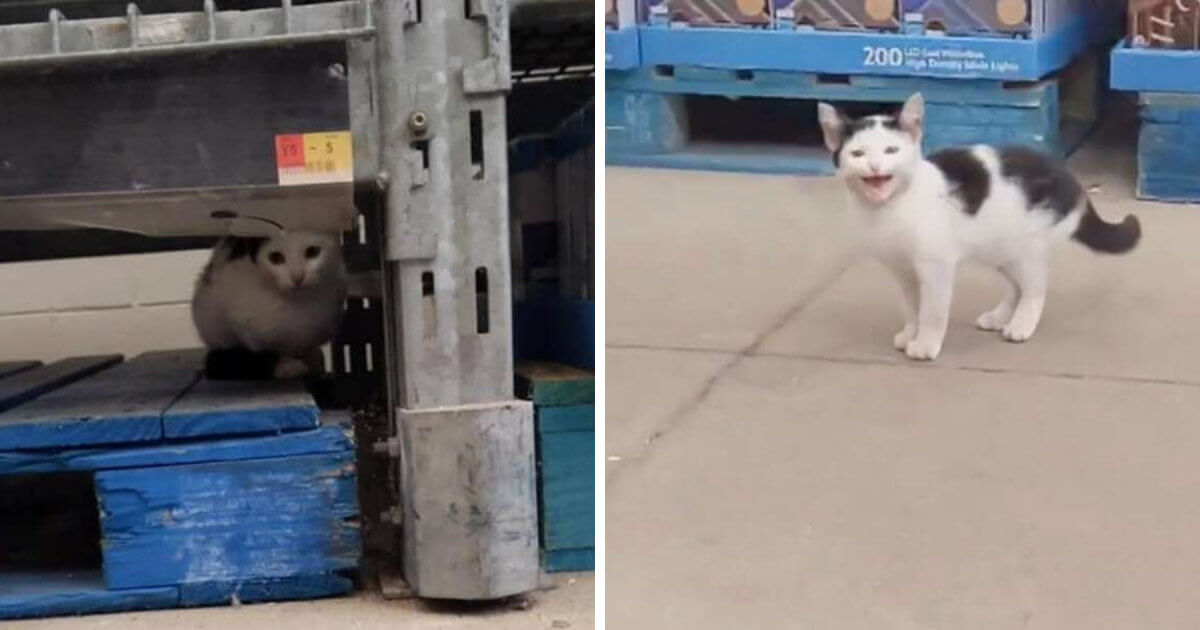 Life is full of surprises, especially when Christmas is near the doorstep. Annually, people tend to go shopping at Target, Walmart, or other superstores to get the best preparations for Christmas. What is more wonderful than having a well-decorated Christmas tree, freshly-baked gingerbread cookies, and a warm cup of latte to have yourself a joyful holiday? Yup, I know you are dreaming of it, so is the middle-aged woman Annie Rahe in Ohio. She can’t wait for the upcoming Christmas, so she decides to go on a spree beforehand, in case there will be a jostling crowd next month, and she doesn’t want to be a part of it. But little does she knows, Santan Claus has prepared an unexpected gift for her.

So, this woman headed over to Walmart, took the shopping cart, and started strolling around the store. When she was about to reach the decoration aisle with excitement, a piebald kitty drew her attention suddenly, and she couldn’t take her eyes off the cat. A kitten was hiding in the middle of the wooden pallets, frightened and insecure. Rahe learned that the cat was ownerless and was abandoned in the parking lot, informed by the staff of Walmart.

“The kitten had been dumped in the Walmart parking lot and kept sneaking into the store and hiding under the pallets.” – Rahe said.

“I don’t know exactly how long he was there, but the worker told me that others had tried to coerce him out.” – She continued.

When it comes to the golden heart of the woman, she immediately prioritized the poor cat’s life over her enjoyment. She appeared to the kitty and recorded him in the distance. The cat was dirty and tiny, but his playfulness overwhelmed his figure. He was chasing his tail and turned around several times without knowing that he was noticed by his mom-to-be. In the recorded video, the woman started giggling when the stray cat displayed his antics.

Rahe and the rescued

When she was done observing the kitty, she got closer to him. She offered him a can of wet food and a cardboard box which was placed in the cart. When the cat was eating, she had a bit of time to have herself some decorations. The cat must be starving. He put his head way down to the canned food, and it was adorably priceless.

“I spent about 45 to 50 minutes just trying to gain his trust, because initially he climbed out of the box and my cart, and I had to catch him a second time.” – She added.

“It made for a chaotic situation.”

The kitty started to wrap his body on her shoulder. Rahe was supposed to purchase Christmas decorations. Eventually, she ended up getting out of Walmart with those stuff alongside a kitty named Wally and loads of cat food as well as cat supplies.

Wally finally made home with his kind-hearted rescuer. He had been well taken care of ever since: Rahe bathed him, fed him, and treated him with love. The video was posted on Tiktok and it crazily went viral: 6.8 million views and 1.6 million likes. People were eager to know the updates of Wally’s life after being rescued. Rahe felt courageous and touched, she gave the audience another video about Wally.

In the next video, you see, Wally’s personality was more pronounced. He loved playing with his human mom, he wasn’t shy to show his tummy to her, he even wanted to get some kisses from his beloved owner. Surely the cat felt happy and content with his new life.

“He is a happy little guy who purrs immediately when I enter the room.” – Rahe said.

“I have to walk carefully around him because he is always right under my feet. He is very playful with all of his new toys, and he is wonderful about using his box and scratching post!” – She continued.

It takes a while for Wally to get along with his cat and dog siblings. But it doesn’t matter at all when he knows his forever home is here with Rahe. Turns out, the woman doesn’t feel lonely this Christmas! She has everything that a person pursuits: a loving home, a lot of pets, and a memorable holiday. She has recently updated her massive Christmas tree and her rescued guardian angel Wally on Tiktok. Hopefully, Rahe will enjoy a wonderful holiday with her furry kids, especially, a newcomer Wally from Walmart.