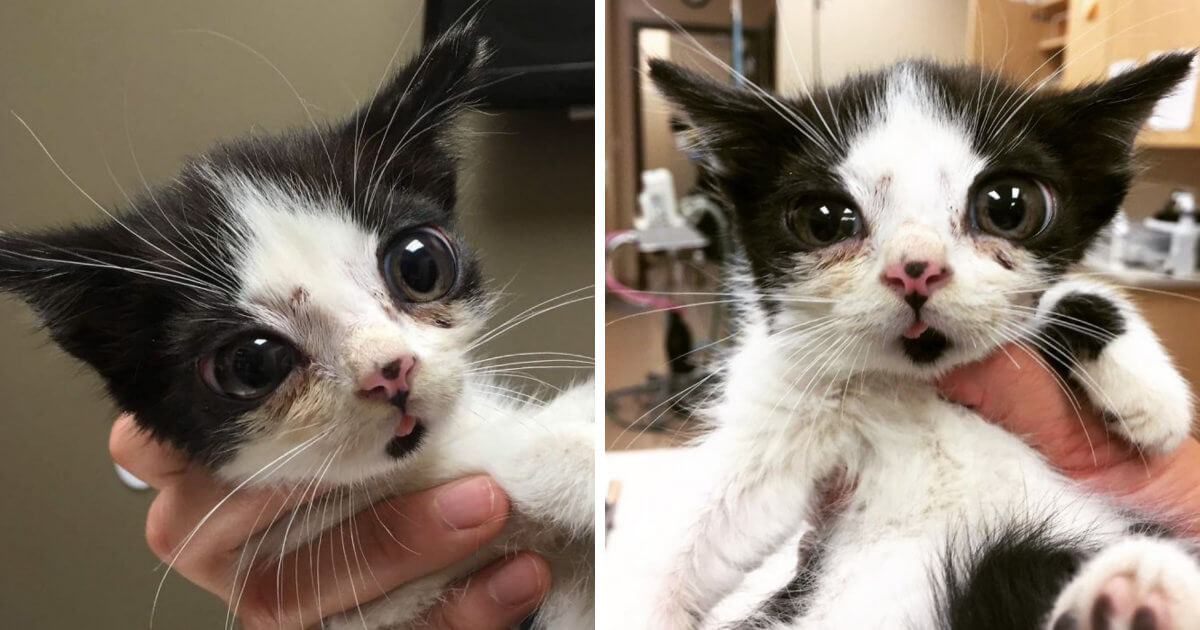 Cats’ huge, sparkly eyes are one of those black magic we just can’t explain and resist, but who wouldn’t fall for those, right? Porg, our main character, is a cat with abnormally huge eyes He was found dumped in a cardboard box in the road and was in poor condition. Luckily, with the care and patience of kind people, his recovery was surprisingly fast and is now a happy, healthy, and snuggly cat who loves his forever home very much. Scroll down to read Porg’s story and see his recovery journey!

Porg was brought into the vet in very bad shape

Porg was found abandoned in a cardboard box by a client of his owner (Porg owner is a veterinarian). The ragged cardboard was laying on her porch and inside was Porg, all scrawny and badly injured with a huge wound around his neck. Sher assumed it was some sort of past trauma and abuse and couldn’t help but rush him to the nearest emergency room veterinarian, where his wound was stitched up.

He has enormous eyes and a huge wound around his neck

She brought Porg in the next day for a full examination, and everyone in the vet was head over heels for him! Despite his tiny, 1.3 pounds physique, Porg was a sassy and fiery furball. But his owner was hooked on the little kitty, and couldn’t resist her client’s proposal to nurture Porg back to good shape. That day, he came home with became a permanent member of the family.

He was undeniably odd-looking compared to other cats because of his abnormally huge eyes, and also other physical features like his smaller lower jaw, but he seemed to be in good condition in general. His name Porg was named after a creature in Star Wars whose appearance is similar to him.

However, she soon learned that he was not your average kitten: his habit of combing or scratching his ears or neck resulted in massive recurring tears in his skin, which is definitely not natural for a kitten.

So while she took care of his scratchings with medicines, she also took a skin biopsy to examine what the underlying problem was. Unfortunately, it verified her hunch that Porg had Ehlers Danlos Syndrome, feline skin fragility syndrome. It is a condition resulting from a genetic disorder that makes the skin more elastic and sensitive than it should be and prone to tearing. This is unusual in cats, and it’s one of the reasons he’s been nicknamed “glass kitten” was due to his fragility.

Despite his condition, Porg was very lively and playful once he recovered from previous wounds. His family members cherish him very much and put tremendous effort into finding what helps to maintain his skin healthily and safe. It was a difficult process but they did found a regimen that Porg managed to follow and perform wonderfully!

He usually wears clothes to protect his skin from scratching

Clothing has a critical role in safeguarding his skin. His owners were always looking out for clothing that fit him well and give good coverage while being comfortable and cute!

His bubble eyes are actually unusual, as he has lens luxations

Porg also has lens luxations, which is a dislocation of the eye lens. Some cats with Elhers Danlos Syndrome have been found to develop lens luxations. Painful as he might be, Porg’s eyes are currently well-managed with daily eye drops.

However, once he quiets down, he is the biggest cuddler and the loudest purring machine

Porg and his veterinarian owner

Porg’s owners hope that his story can inspire others to open their hearts to special needs animals and prove that difference is not always a weakness, but can also be a strength to thrive in life!