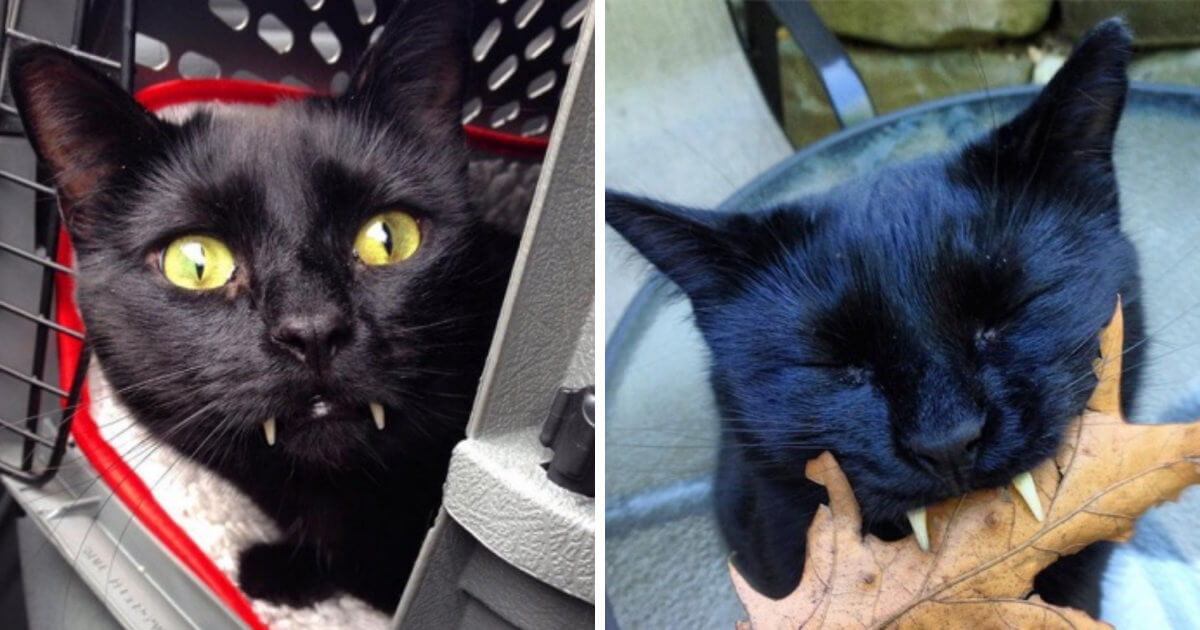 The last time we checked, this kitten was a stray one with lots of filth, bugs, and infections. Turns out, he is now a charming Vampurr who has taken over social media. What actually happened to this little black panther? Let’s find out the marvelous journey of Monk!

Nicole Rienzie was on her way to come back home in her mom’s car. When they were driving, there was a black little kitten dashed across the street without knowing the car would have hit him. Luckily, Nicole’s mother braked the vehicle in time and they went out of the car to save the kitten. Nicole reported that the kitty’s eyes were severely infected and he could barely see anything on the street as he was walking across the street.

“He was covered in filth, bugs, and very malnourished. His eyes were infected shut.” – Nicole explained.

They couldn’t imagine what would have happened if they ignored the poor cat, so they took him home. Nicole took care of the cat with lots of food, TLC, bath, and affection. She felt like they were meant to be. After several days of recovery, the black kitten was healthy and happy. He started to reveal his lofty cattitude. He began to ask Nicole to play with him whenever she was at home. He kept running around the house as if he was not tired at all. The cat’s energetic character drove Nicole to name him Monkey (Monk in short).

“He quickly earned his nickname because of his silly, hyper antics.” – Said the woman.

As time went by, Monk’s two front teeth grew longer than others which made him resemble a vampire. Despite his appearance stimulating Nicole’s interest, she still wanted to make sure the grown-up fangs were safe and normal for a cat. Nicole took Monk to the vet to check his canines, and she learned that those fangs could happen to cats but it was rare. The kitty’s health was very well!

After the trip to the vet, Nicole didn’t feel like she had to bring him to the shelter anymore. She adored the cat more than ever and she was absolutely in love with his unique outlook.

“At first I tried to find him a home but I realized how much our meeting was divine alignment. I needed him just as much.” – Nicole said.

These vampurr teefies urged Nicole to create an Instagram account so that people could see how magnificent and adorable this cat was. Soon after that, people’s attention was rapidly increasing. Nearly 150K followers have been attracted by Monk’s adorable vampurr fangs. But admit that, who can ignore this beauty of Monk? No one!

After a year of rescuing Monk the vampurr kitty, Nicole also adopted another black cat and she named the cat Bean. They became the most fascinating black duo for a very short time.

Although Mock was hyperactive and a little bit feisty, he was very sweet toward Nicole and Bean. He usually gave Bean a lot of loving grooming. Check out their daily lives on Instagram and tell us what you think about Monk’s special fangs in the comment!