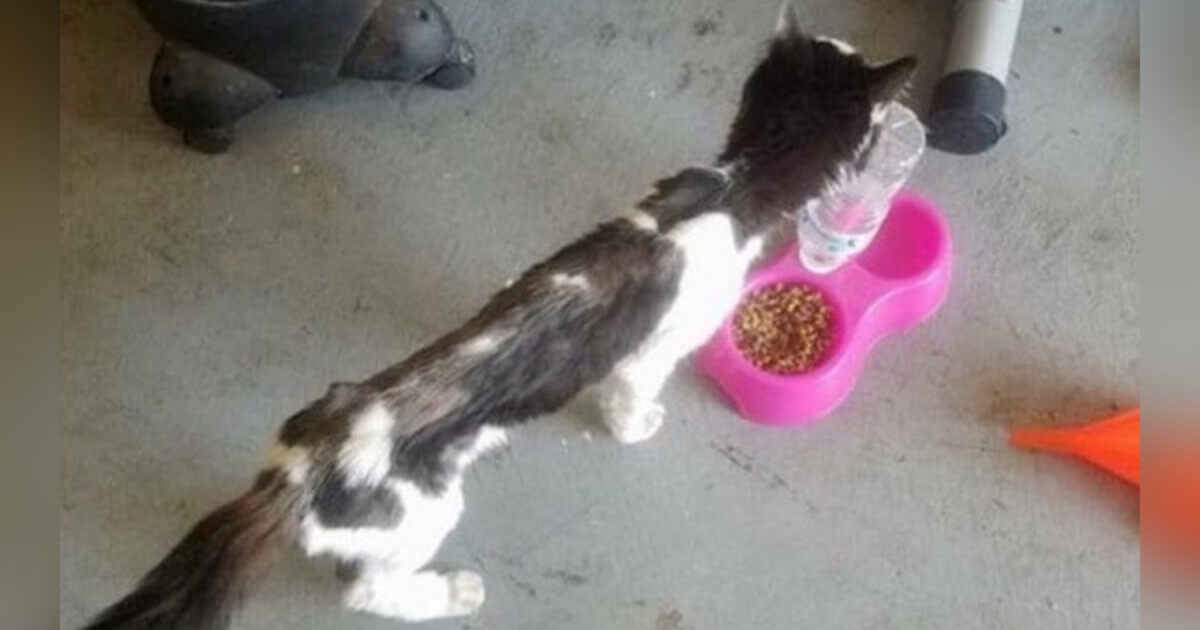 Being abandoned, left alone to die is the most devastating moment that no one wants to imagine. This black and white kitty doesn’t hope that situation will come to him either, but it sorrowfully did. However, kind souls are still on this planet. With the help of Kitty Adventure Rescue League & Sanctuary, the cat gets better eventually, and he just can’t stop smiling after receiving love from them!

Wallace is a cat who weighed only 5lbs when he was found pacing about the district. One morning, Kitty Adventure Rescue League & Sanctuary received breaking news from a person on Facebook. An underweight adult cat was in need of help. Karyn Poplin volunteered to rush the cat to the vet’s office.

“I didn’t really need to see any more than this first photo before I knew I had to help.” – Karyn said.

None of them knew the reason why this cat was so emaciated and how long had he been wandering around the street. Poplin didn’t hesitate to give the cat a hand so he could live a better life, a thing people called ‘second chance’.

“We think that he had an owner before. But, we are not sure if he had bad luck or if someone dumped him off on the streets. His owners never come and he was not microchipped, so we took him in.” – She said.

By the time Wallace was surrounded by food, care, and love at the shelter, he started to purr out loud like a motor engine! Everyone noticed that he kept smiling during the time when he was in the shelter. Surely he was hungry and thirsty due to the time he had to fend for himself with a scrawny body.

It was estimated that Wallace was around 7-9 years old and he was thinner than the standard of an adult cat should be. He also missed some teeth. What a poor little baby!

“He is a very lovely cat! He was very happy to have someone to play with him.” – She continued.

All a cat need is to be fed and loved. As time went by, Wallace was stronger, bigger, and healthier. He was more open to the shelter and was ready to have a permanent home for the rest time of his life. The best news was he could eat food properly after a while! Karyn was happier than anybody else.

“We have a positive outlook for his rehabilitation. No kitten should be this skinny!”

When he was welcomed into a new loving home, Wallace was confident enough to get along with his new buddy Oswald. Wallace was no longer skinny and unhealthy, he turned into a Prince charming!

“His roommate is 20-year-old Oswald and they are now very good friends. Wallace’s favorite place is the window and Oswald takes the beds.” – Karyn said.

The kitty was in love with human interaction. He loved to be around his owner to get some head scratches and chicky cheese treats. Loving Wallace is easy, but behold, he is gonna love you tenfold!