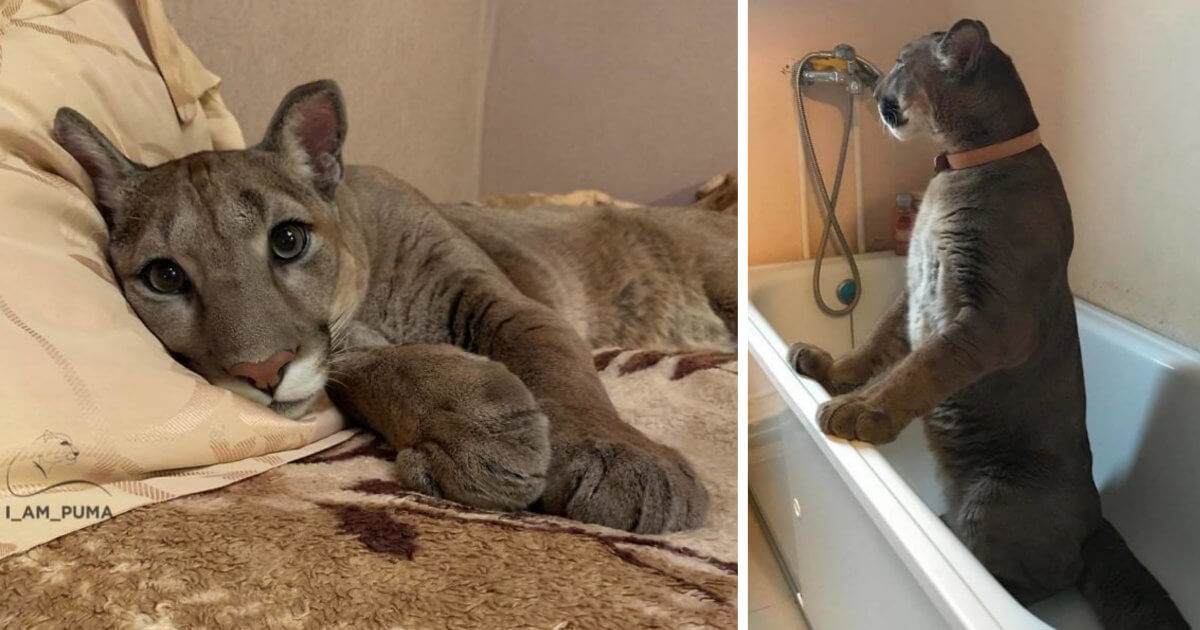 Messi is just as adorable as any other cat, but there is one ‘huge’ difference – he is a cougar! His owners – Mariya and Aleksandr Dmitriev, spotted him at the zoo in Penza when he was just an eight-month-old baby. Ever since then, they knew that they had to adopt him.

Scroll down to read Messi’s story and photos of his daily life!

Messi was one of three cougar cubs born in the zoo at Saransk, Russia. His other brothers, Suarez and Neymar were also named after famous players because Saransk was one of several cities that proposed to host the 2018 FIFA World Cup in Russia. However, Messi was later sold to a petting zoo in Penza when he was three months old.

A photo of baby Messi! He sure has transformed successfully into a beautiful grown cougar

He suffered from various health problems at such a small age. He was significantly smaller than normal pumas, and the species is not a native animal in Russia, therefore, the chances of him rehabilitating and returning to the wild are very low, therefore, he will need to be under human’s care when he grows up.

Aleksandr and Maria Dmitriev, Messi’s owners’, are two psychologists who live in the western Russian city of Penza. Aleksandr always dreamed of having a big cat, as Maria said: “He always thought about having a lynx – never a puma. It’s hard to explain but we believe that having this puma as a house cat is part of our destiny.”

In 2016, they visited the zoo where Messi was moved to and instantly fell in love with him. At first, they were still in doubt whether to adopt Messi: “We had three days of thinking hard about whether it was moral to keep such an exotic pet, and whether it was common sense to have one. But nothing could fight our sudden wish,”

Their wish was later granted when the zoo agreed to hand Messi into their care: “So we went to the zoo and started negotiations to buy Messi. We were surprised when they agreed.”

Taking care of Messi was not an easy task, as he was already ill and had lots of health issues, he is also an exotic cat. Therefore, the family needed extra medical treatment, attention, and care towards their special pet. The couple was able to nurse him back to better health, but he is still only two-thirds of the size of the average puma.

Just like any other pet, Messi requires lots of exercises. When they first took Messi home, Alexandr and Mariya Dmitriev lived in a small studio apartment, however, due to his need for exercise, they decided to modify the house to expand his play area. They also purchased a special coat and harness so they can take him on walks.

Messi is regarded by his owners as similar to a dog: “He is like a dog. We started taking him for a walk, step by step” – “Now we walk a lot twice a day, as it’s supposed to be. It doesn’t differ much from owning a dog in this sense.” They eventually found a dog training school he could attend and now responds to about 10 different commands.

“He convinced us with his behavior that he’s a full member of our family and that he wouldn’t be doing anything bad apart from some small naughty things. He’s very kind and likes contact. He gets on very well with people,” says Aleksandr.

Much of a dog he is like, Messi is just like other cats, the only thing different is that he is bigger! Messi has those cat habits and characteristics you would definitely realize:

From cuddling with his parents…

…. to napping several times a day

He is also a very curious and playful big baby

Her mom Maria has made an Instagram called @I_am_puma  with more than 1.5m followers and over 170k subscribers on his YouTube account. People love seeing his daily activities and also his interactions with the other ‘big cat’ in the house – Gerda the cheetah. Messi used to be anxious when he was around Gerda, but they are working on it!

Adopting Messi has encountered inevitable objections from animal and environmental rights activists. They argued that keeping an exotic animal inside can not satisfy its need for habitat, food, and most importantly, the maintenance of instincts such as hunting, defending, mating, ….

They believe Messi belongs in a wildlife reserve or a sanctuary. While others note the danger of living with wild animals.

However, the couple clarified that Messi could not be rehabilitated to the wild due to health issues and that he has never lived alone in the wild, so he can not survive. “Of course it’s quite dangerous having such a large cat at home, but Messi is a special animal,” Mariya told the Mirror.

What do you think of Messi? Is he adorable? Is he threatening? Do you ever want to own a big cat like him? Leave a comment down below!

Check out Messi playing with a watermelon – his favorite fruit!

Learn how to wash a puma